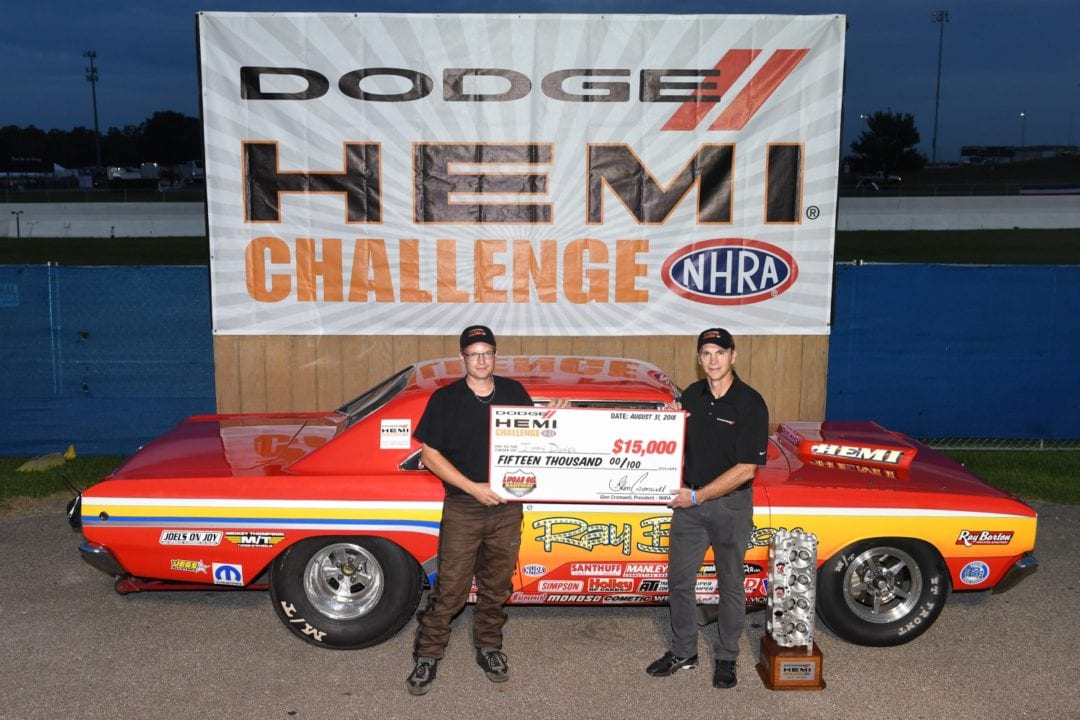 Jimmy Daniels wrote his name in the NHRA Dodge HEMI® Challenge record books, defeating No. 1 qualifier Gary Wolkwitz in the final round to become the first driver to claim three consecutive victories in the event at Lucas Oil Raceway at Indianapolis.

Daniels, 22, bested his 72-year-old Ray Barton Racing Engines teammate Wolkwitz in the first-ever all-1968 Dodge Dart final round in the 18th year of the fan-favorite event, held during the NHRA U.S. Nationals. The win is the fourth overall for the Daniels family, including the 2010 victory by Jimmy Daniels Sr. in the same Mopar-powered Dart. 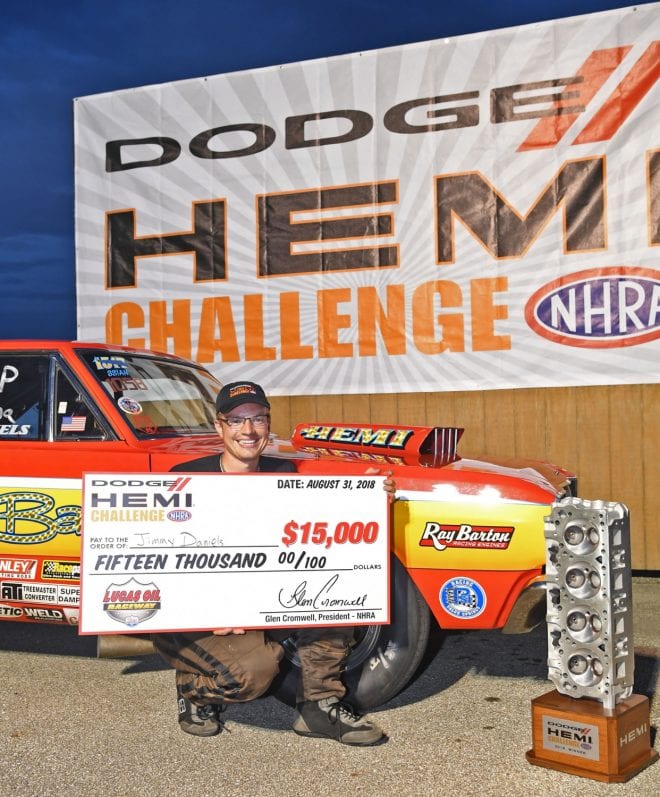 “Congratulations to Jimmy Daniels on claiming his third consecutive victory in the NHRA Dodge HEMI Challenge,” said Steve Beahm, Head of Passenger Cars, Dodge//SRT, Chrysler and FIAT, FCA North America. “His hard work and dedication has special significance this year, as his victory comes during the 50th anniversary celebration of the legendary 1968 Dodge Dart and Plymouth Barracuda Super Stock cars. The Dodge brand is proud to serve as title sponsor of the event and help recognize the legacy of these racecars, which continues on with our modern-day ‘package car,’ the Mopar Dodge Challenger Drag Pak.”

Daniels qualified No. 2 in his 1968 Dodge Dart and promptly threw down the gauntlet in round one with an 8.522-second elapsed time (ET) to send home Mark Howes. He sped to a steady 8.542 in round two after his opponent Dan Zrust fouled out after leaving the starting line early, and after a bye run in round three, Daniels defeated the “Missouri Mule” 1968 Plymouth Barracuda of Russ Campbell with the quickest run of the weekend, a monster 8.511 pass.

In the final, held under the lights just prior to NHRA Nitro qualifying, the dental student from Pennsylvania launched first with an .033 reaction time paired with an 8.662/156.15 to claim victory over Wolkwitz, who spun the tires and slowed to a 10.110/97.63.

“It’s incredible. I just couldn’t imagine it,” said Daniels of his win, which came in his first race action in almost a year. “It’s unbelievable. There’s so much that goes into this, it’s insane. We put so much into this. The first qualifying run was my first pass (since the NHRA Dutch Classic last October). The car and I just get along. It’s cool, to be able to have us both (teammate Wolkwitz) here, and qualify one and two.”

New Jersey native Wolkwitz locked down his second consecutive NHRA Dodge HEMI Challenge No. 1 position on Friday and then clocked an 8.523 ET on his first-round bye run, paired with the fastest speed of the meet at 157.04 mph. He was quickest in round two, posting a 8.526 ET to take down Wendell Howes, and then used a 8.525 to trailer the uniquely-painted 1968 Plymouth “Psycho Kuda” of inaugural 2001 HEMI Challenge race winner Bucky Hess. Wolkwitz advanced out of the semifinals after opponent Gus Mantas bowed out on a red light foul. 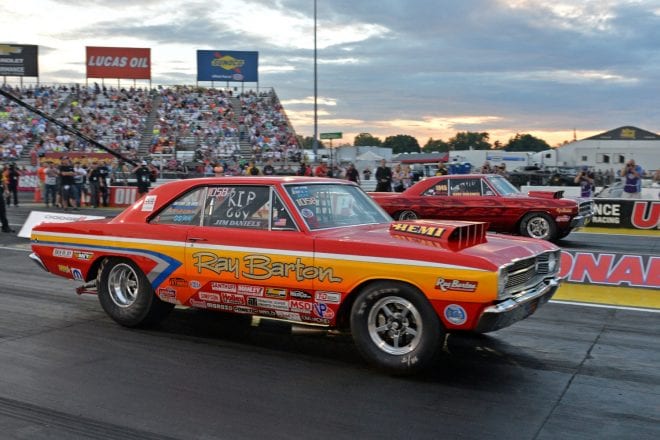 “I’m happy, it’s great to race my teammate and a young kid who I respect completely,” said Wolkwitz, who made his first career final-round appearance at the Indy HEMI Challenge. “He spun too, but not as bad as I did.”