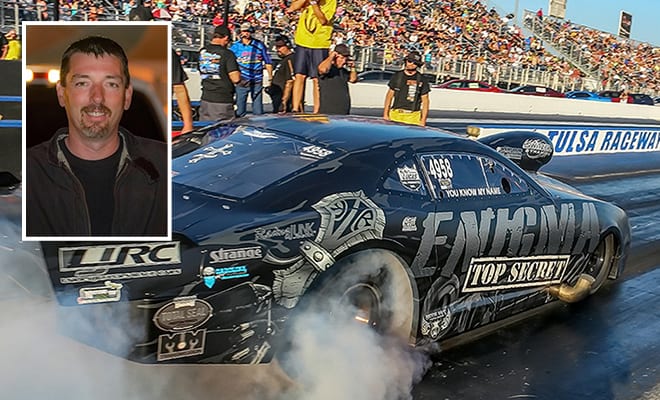 Vowing to “drive his car better than he does,” veteran street racer “Daddy Dave” Comstock has agreed to step into Keith Haney’s 2017 championship-winning Radials vs. the World (RvW) ride Mar. 2-3, for the season-opening Frankenstein Engine Dynamics Mid-West Pro Mod Series (MWPMS) event at the Texas Motorplex, near Dallas.

“Keith knows I can drive and I’m real competitive and more than ready to push things right to the edge,” stated Comstock, a regular on the Discovery Channel’s runaway hit Street Outlaws TV show. “I’m going to drive it like it’s my own and I’ve been known to grenade stuff before in order to win, so …,” his voice trailed off. “No sense in leaving anything on the table.”

Haney said he expects nothing less. “Dave is an aggressive driver, a good driver, exactly the kind of guy I want in there. It’s a proven car, a race winner and a championship winner, so he better do at least as well as I did,” he countered with a laugh.

Though he’s raced in the past at the Motorplex and is familiar with most of the MWPMS drag radial competitors, Comstock said he’s never attended an MWPMS race before and is looking forward to the experience. “Any time you can race against those types of guys, I’m in.”

In the Pro Mod class, Haney will be driving “Notorious” at the Motorplex, the nitrous-boosted 2016 Camaro in which he also won the 2017 MWPMS Pro Mod class championship, while Comstock will race “Enigma,” a nearly identical-appearing Camaro that scored a race win and the RvW title last year. The biggest difference between the two are the giant, 17-inch wide racing slicks bolted to the back axles of Haney’s ride compared to relatively narrow drag radial tires out back on the car Comstock will pilot.

“I run the big tires on the street with my car,” Comstock said of “Goliath,” his TV-famous ’63 Chevy II. “And I usually leave them on whenever we go to the track, too, but I do get my car out on radials a couple of times a year at Donald Long’s big races, so they’re not a mystery to me.”

Both Haney and Comstock will be racing their own cars at Long’s Lights Out 9 event Feb. 13-18, at South Georgia Motorsports Park, where Haney suggested Comstock might even make a test run or two in “Enigma.” However, while he admired Comstock’s confidence, Haney cautioned his latest racing partner not to assume too much before climbing into a car that covers an eighth mile in 3.8 seconds at 200 mph.

“This ain’t no street car—outlaws or otherwise—this is one badass Radials vs. the World machine with more horsepower than he’s ever strapped his ass into before,” Haney said. “This car is quicker and faster than anything Dave has ever driven, so I just hope he knows what he’s doing. When he gets to the Motorplex he’ll be going up against the very best of the best. Guys like DeWayne Mills, Daniel Pharris, Mark Micke, Mark Woodruff and whole bunch of other guys who are no pushovers. All I can say is he better be ready.”

If all goes well in Texas, the MWPMS outing may represent one more step toward Comstock reaching his ultimate goal of taking on NHRA Pro Mod competition.

“I could jump in a car tomorrow and go NHRA Pro Mod racing. But the thing is the show has me wrapped up for a few more years,” he explained. “I’m under contract on paper, so I have to ride that thing out. I mean, I enjoy making TV, and street racing, I love it, but as soon as that’s over I’ll be sitting in a Pro Mod somewhere. For right now, though, I just want to thank everyone at Keith Haney Racing for the opportunity.”