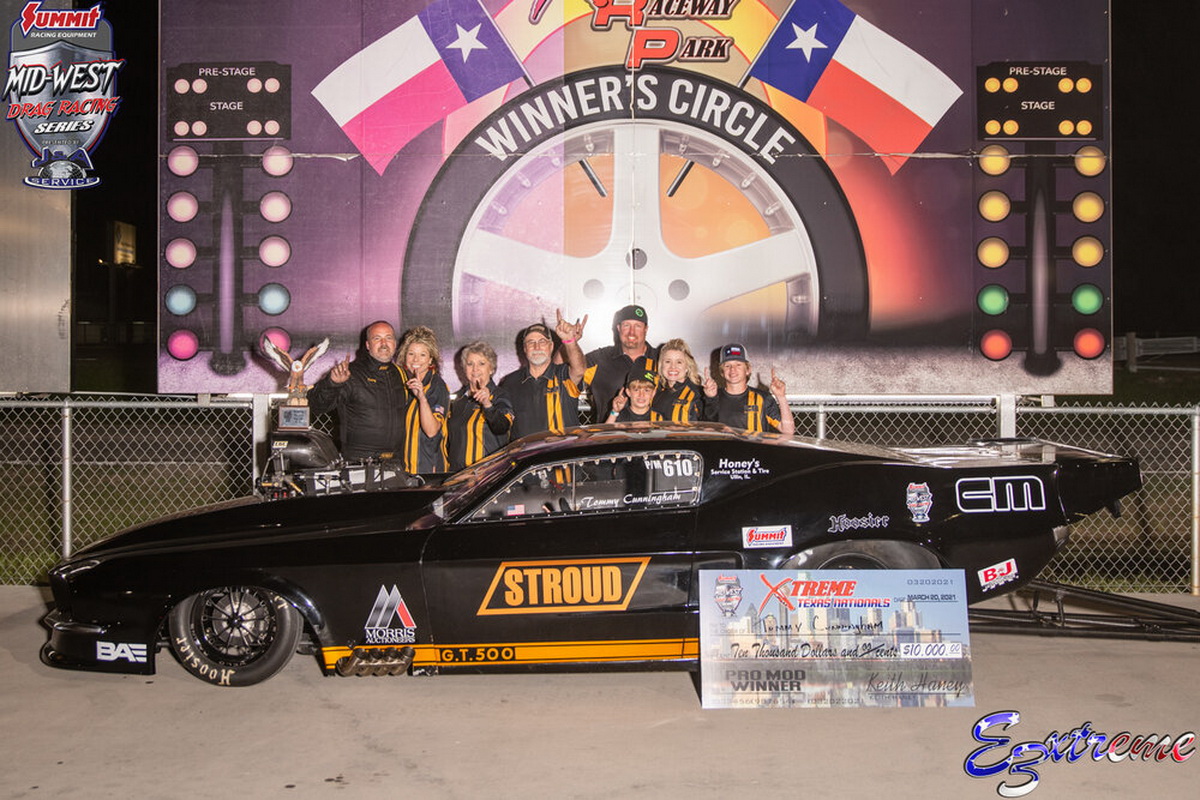 “My dad, Larry Cunningham, he’s our crew chief and he did a lot of laptop tuning all winter long, so he felt pretty confident on where he was and each round he just stepped it up a little bit,” Cunningham said. “We ended up having our career-best pass in the final, so he did a great job.”

“As the evening progressed the air just kept getting better. It was cooling off and it was all Steve Boggs, licking his chops, scanning and watching that weather station,” Bellemeur said. “The car was making huge power and the track could handle it, so Boggs just unloaded a huge run for the final, almost 216 miles an hour. It was a great way to finish a really positive weekend.” 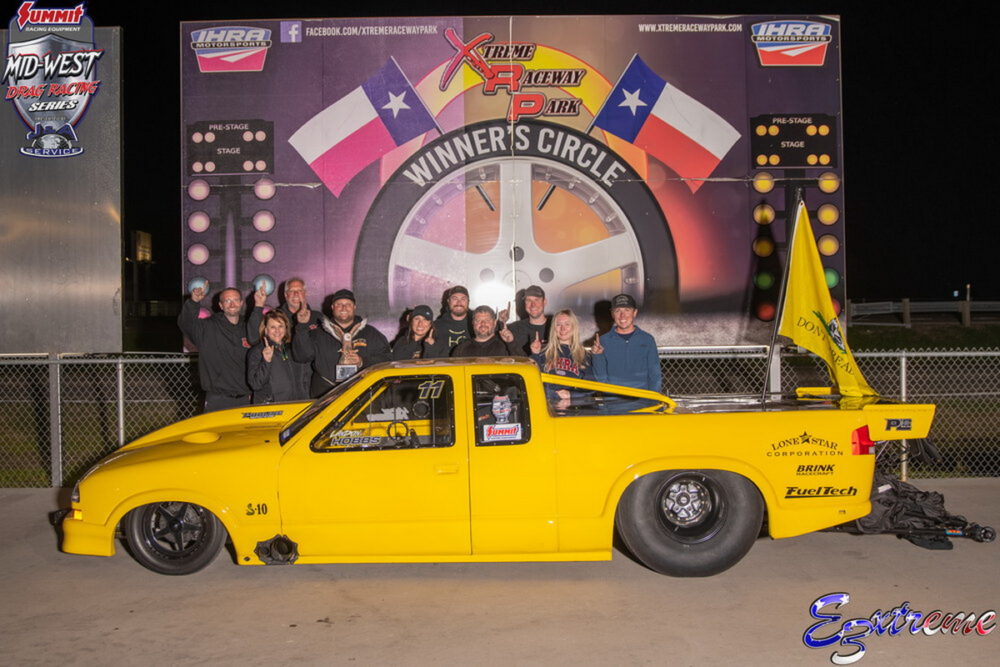 The event also marked the beginning of a new era for MWDRS as MAVTV+ was on the XRP grounds filming for a season-long series of live streaming and taped events for airing this fall, hosted by NHRA Funny Car star Jack Beckman and motorsports journalist Dave Rieff, with MWDRS announcing veterans Al Tucci and Chad Reynolds providing the play-by-play calls and interviews.

“MAVTV, they knocked it out of the park,” Haney declared. “I could not be happier with the production they did. There must’ve been 20 different camera angles and they interviewed all the round-winning racers, followed every car off the track, it was just a great, thorough job from start to finish. Phenomenal work.”

After qualifying his screw-blown ’67 Mustang ninth of 21 Stroud Safety Pro Mod entries, Cunningham made it through Jeff Rudolf, Todd Martin and Ed Thornton to reach the final round versus Jim Whiteley, who started second behind number-one starter Martin and drove his supercharged ’63 Corvette past Taylor Lastor, Aaron Wells and Mike Labbate.

The Pro Mod final was all over as it began, however, as Whiteley left six-thousandths of a second too soon to negate a 3.67 pass while Cunningham won with a 3.66 at 200.89-mph run.

“We stepped it up just a hair for the final and we ended up having our personal-best run across the board, best 60-foot, best 330, best E.T., so yeah, we’re very pleased with where we are right now,” Cunningham said.

“You know, we’re strictly a family team, just me and my dad, my mom, Susan, and my wife, Anita. So it’s just the four of us and if one of us can’t go to a race we don’t go,” he added. “But I also want to thank all our employees at home at Stroud Safety and Cunningham Machine. We’ve got good people at both locations and without their hard work we wouldn’t be able to be out here either.” 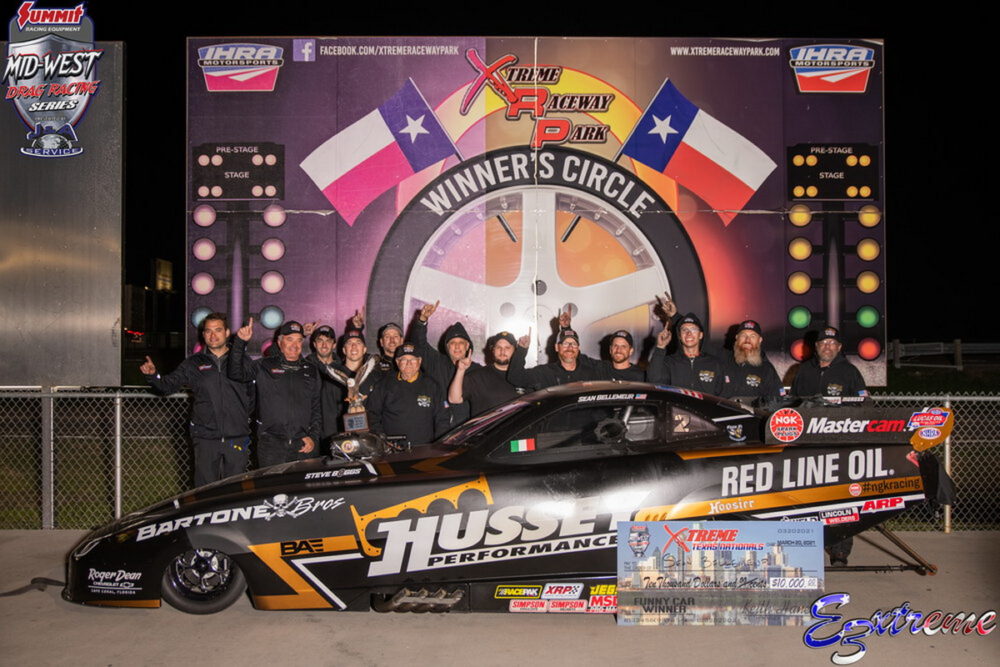 Bellemeur led eight TA/FC entries at XRP with a new class record 3.57-seconds qualifying pass at 215.41 mph in the Tony Bartone-owned, Hussey Performance-backed Camaro flopper. He then downed Steve Burck and Ray Drew before taking on Chris Marshall in the final, where he ran another 3.57 at 215.93 to earn the race win.

“Before the weekend, we had been told that there had never been a 3.50-anything run in the Midwest Drag Racing Series and we happened to run three of them,” the series defending champion pointed out.

“So the car’s making huge power, but the track could handle it. I mean, the facility itself is incredible, the fans, the people who work there, and again, the racetrack is just exceptional. And then as the evening went on and the air got better, Boggs just unloaded a huge run. It was fun.”

Marshall didn’t go home empty-handed either, as his team received the new MWDRS Aryon Rochon Hardest Working Crew award in recognition of an overnight thrash for repairs after a converter explosion in qualifying caused him to hit both walls. Additionally, Funny car racer Bill Bernard received the new Copeland Race Cars Tough Luck award after scraping the wall with a brand-new race car.

The 2021 schedule for the Summit Racing Mid-West Drag Racing Series presented by J&A Service resumes Apr. 23-24, with the inaugural MWDRS Bayou Nationals at No Problem Raceway in Belle Rose, LA. Additional stops at Tulsa, OK (twice); Houston, TX; Great Bend, KS; and Martin, MI, will follow, with a return to Ferris in October for the 2021 season finale.