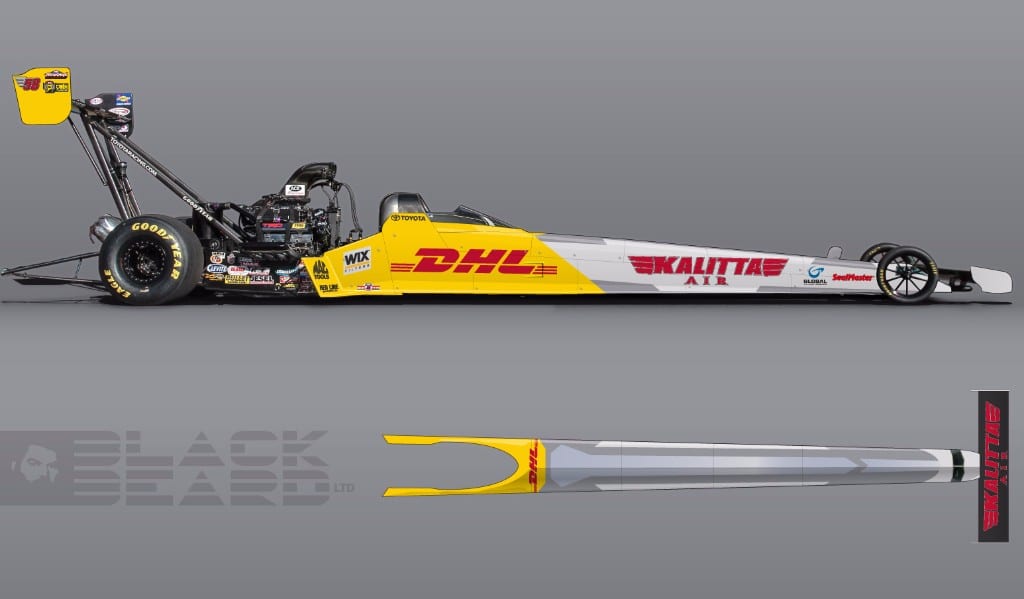 Richie Crampton’s Top Fuel Dragster will display the Kalitta Air and DHL partnership in multiple races for the 2018 season. The scheme is modeled after the co-branded DHL and Kalitta Air 747’s that deliver packages worldwide.

“The DHL partnership with Kalitta Air has been going on for many years and has been one of our most successful,” said Kalitta Air owner and drag racing icon Connie Kalitta. “I am pleased to be able to showcase our relationship on the Top Fuel dragster driven by Richie Crampton. We plan on continuing that run of success with many victories this season.”

The motorsport connection between DHL and Kalitta Motorsports has lasted over a decade, making it one of the longest running and most successful sponsorships in the sport. Del Worsham flew the DHL colors to the Funny Car championship in 2015 and current DHL Funny Car driver J.R. Todd earned DHL their first U.S. Nationals win last season.

“I am extremely lucky to get to drive the full season for Connie Kalitta. Now to be able to honor his other passion, airplanes, on the side of the car makes it even better,” said former NHRA Road to the Future winner Crampton. “The DHL and Kalitta Air partnership has been extremely successful and this scheme highlights that.”

The gray and yellow colors will be campaigned by Crampton for several races throughout the 2018 NHRA Mello Yello Drag Racing season. Crampton, who will compete for the championship in a full-time seat, will run several different schemes throughout the year with some races having primary inventory still available.