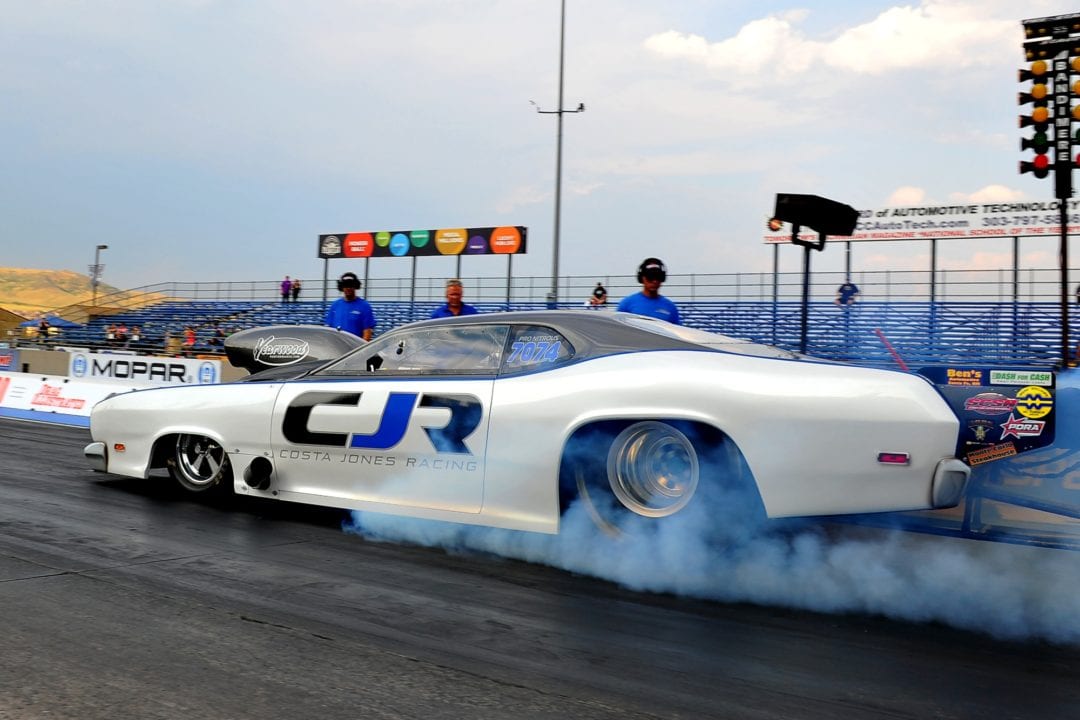 The word is that nitrous Pro Mods will struggle mightily in the high-altitude conditions at Bandimere Speedway. Robert Costa is determined to change that way of thinking and he is ready to do it on the biggest stage.

Costa, the owner of Albuquerque Dragway, will campaign his nitrous-powered ’70 Duster at the DRAG ILLUSTRATED World Series of Pro Mod, which takes place Aug. 10-11 just outside of Denver.

The thin air on Thunder Mountain may put a nitrous car at a disadvantage, but with 15 years experience racing at Bandimere, Costa is confident he can prove the naysayers wrong at the biggest and richest Pro Mod race in the history of the known universe.

“I think people are going to be surprised that a couple of nitrous cars can run with them,” Costa said. “It’s going to be cool to have all three combinations there. Being somewhat of a no-name racer, maybe they will take us for granted and think we may be the easy prey. But we will be competitive.”

Costa, who has run well in a handful of appearances in the Mid-West Pro Mod Series in 2018, could provide the Cinderella story of the $100,000 winner-take-all WSOPM. Without question, though, Costa is all-in on the race.

Along with Costa’s participation as a racer, his brother’s company, Yearwood Performance, is an event sponsor, adding another level of excitement for the family heading into the race. The Albuquerque-based Yearwood Performance supplies parts and to Robert’s car and several other Pro Mod cars in the region, with the sponsorship allowing the company to be seen on a bigger level at the marquee event.

Throw in Costa’s high regard for Bandimere Speedway and it results in a can’t-miss event.

“We love racing in Denver. It’s kind of our second home and it’s the same elevation as what we run in Albuquerque,” Costa said. “It’s a great venue and there is no other track like Bandimere. I don’t think there’s an equal to Bandimere. You can throw everything at the track because you know the track can take it.”

Costa plans on doing just that, having spent plenty of time and energy preparing to run well during the WSOPM. That ample work has proven successful, and Costa believes his team has developed a gameplan to make continuous improvements throughout the course of the weekend on Thunder Mountain with his nitrous combination

“I think we can have a good combination right off the bat,” Costa said. “We’ve ran some pretty good numbers up there and we’ve learned a lot. We’re not new to running at elevation, and I think we can take our numbers and improve. We’ve learned how to bring in the power much sooner and how to manage the power.”

Costa and his team have also made adjustments to gear ratios along with other changes to help the nitrous car perform better at an altitude approaching 6,000 feet on Thunder Mountain.

But the way Costa views things, he’s in a no-lose situation. He know he’s an underdog, but Costa remains confident he can surprise some people during the weekend.

With the matchups not being decided until after the shakedown runs are completed on Friday, the possibility of playing the spoiler becomes even more prominent in Costa’s eyes. He watched Mike Bowman get hot during the weekend and claim the six-figure payday a year ago, making Costa believe that anything is possible during the WSOPM.

“To be a part of this race, it’s kind of a no-brainer for us,” Costa said. “Not knowing who you’re going to run, I think that adds a level to it as well because anybody can win. If you happen to have the right five rounds, anybody can win.”