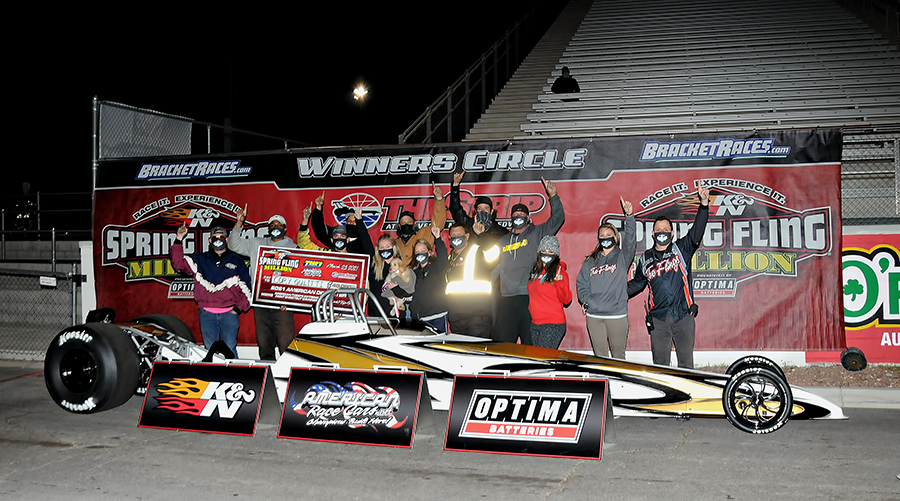 The K&N Spring Fling Million presented by Optima Batteries raced into action Tuesday with three rounds of FST Carburetor Time Trials. Over 400 of the nation’s best bracket racers made practice runs throughout the day.

Racers from across the country descended on the Strip at Las Vegas Motor Speedway for the legendary Spring Fling Million. Beautiful skies and a stiff headwind greeted racers as they refined their setups for the upcoming races scheduled for the next several days.

In addition to FST Time Trial Tuesday, 32 racers competed in the American Race Cars / Todd’s Extreme Paint Dragster Shootout. The winner would receive the American rolling dragster valued at over $40,000. The dragster included top of the line components along with a Todd’s Extreme custom paint job. The Shootout runner-up would receive an entry into Friday’s Spring Fling Million.

Eight competitors reached round three of the Dragster Shootout including Val Torres Jr., Trey Vetter, Cory Gulitti, Mark Barnhart, Gary Williams, Shane Thompson, Rodney Snider, and Tim Markogly. Torres used a .014-pack to move past Vetter and Gulitti won a double-breakout over Barnhart after both racers were .00x at the tree. Williams used a holeshot to turn back Thompson after both posted dead-on the dial passes. The lone door car of Rodney Snider was .010 dead nine to turn back the dead zero lap of Markogly.

The final was sure to be exciting as Gulitti and Williams are both outstanding racers that tend to drive the top-end. Williams grabbed a small .004 to .009 lead off the line but it would be Cory Gulitti taking the double-breakout victory which saw both racers pedaling heavily down track. Cory’s 4.516 on his 4.52 dial was slightly better than Gary’s -.014 under 4.696 (4.71 dial) which secured the American dragster.

Shortly after the Dragster Shootout final, time trials concluded for the day. Next on tap is the Maytag/Silver State Refrigeration Wednesday $30K. Racing begins at 8am on Wednesday with the Gearwrench Pro Class kicking off eliminations.

You can follow all the action from the K&N Spring Fling Million live at www.bangshift.com thanks to JEGS and Hoosier Racing Tire.