Industrial Distribution Group (IDG) driver Dave Connolly will pull triple-duty in this weekend’s 28th annual Uni-Select Auto Plus NHRA Nationals at Maple Grove Raceway. Connolly, 29, is slated to make his final appearance driving the IDG Chevrolet Pro Stock car, and will also drive the Berger Chevrolet COPO Camaro in the Stock Eliminator class. All the while, Connolly will continue in his role as crew chief alongside Tommy Utt on Erica Enders’ KLR Group Pro Stock Chevy.

Connolly hopes to add to his success at Maple Grove, as he’s raced to the finals in Pro Stock the last three times he’s driven at the track. Connolly won in 2010, finished runner-up in 2008 and won in 2007. 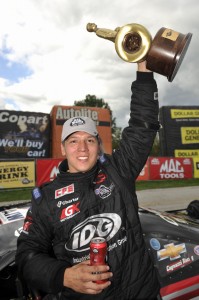 “You never know about Reading,” Connolly said. “It’s an interesting place. You could go out there, and it could be record-setting conditions, or it could be hot and nasty. You just never know what you’re going to get. Maybe we’ll get lucky and try to set a record and get some bonus points.”

He’s talking about Enders’ car, which sits third in the Pro Stock points standings with three races remaining in the Countdown to the Championship. His role as crew chief is as satisfying as his driving duties these days.

“It’s always something that intrigued me,” Connolly said. “Pro Stock is such a technical class. There are so many key ingredients that go into making a good run, from bumper to bumper. It’s like an ongoing science project. I’ve grown to like it quite a bit. It gives you a lot of gray hair, but it’s fun. It’s all about the challenge, and that’s probably been one of the biggest challenges I’ve ever faced.”

Connolly is still challenged by driving, too. In a part-time role, he won the U.S. Nationals last month and has been to two other final rounds.

So how does he stay sharp with so much on his plate?

“It’s something I’ve always done,” Connolly said. “Ever since the age of 15, I’ve always been behind the wheel of something. There’s no substitute for seat time, and I’ve gotten plenty of that the last 13, 14 years of my life. Being around racers 24/7 and eat, sleep and breathe it, it becomes second-nature to you at some point.”