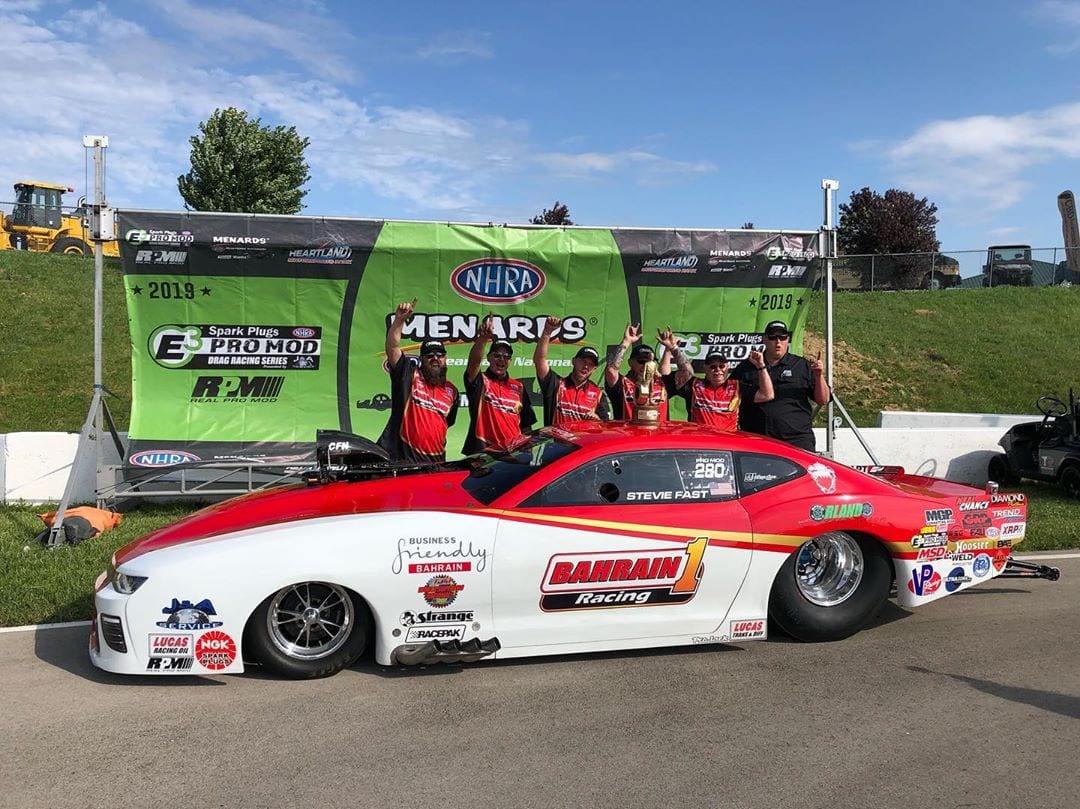 This meant a little more to Stevie Jackson and it had nothing to do with racing.

The NHRA Pro Mod points leader continued his torrid pace through the class as it reached the halfway point of the season, winning for the second time in 2019 with his impressive triumph in Topeka.

But this win was about much more than that.

Jackson’s crew chief, Billy Stocklin, lost his dad, William, leading up to the race and an emotional Jackson dedicated the victory to his tuner in the top-end interview.

Days later, the emotion remained and Stevie “Fast” hoped the weekend would provide a lasting memory for his friend and crew chief.

“Rarely in life do we get an opportunity to positively and truly affect someone close to us. Billy was extremely close to his father and watching him go through the emotional rollercoaster over the last week, I knew this would be important to him coming off such a tragedy in his life,” Jackson said.

“We never talked about winning the race until after it was over, but we both knew how important it was. I looked at Billy on Sunday and told him, ‘Nobody is going to leave on me today.’ It was very emotional for him and me. I hope that’s something he’s always going to remember.”

Jackson was spectacular on the starting line, while Stocklin delivered a supercharged Bahrain 1 Racing Camaro that was unstoppable in Topeka. Jackson qualified No. 1 and then dialed up a pair of 5.78s and a pair of 5.74s in eliminations, going 5.747 at 251.72 mph in the final-round win against Clint Satterfield.

Jackson was between .021 and .030 on the starting line on raceday, ensuring Stocklin could find a bright moment during a difficult time.

It pushed Jackson’s lead to 97 points over Todd Tutterow after six races, and like his first win of 2019 win, he hoped this victory sent another message to the rest of the class.

“Absolutely. I want to let everyone one of them know, if you come up to the starting line to race me, you better be ready and you better be willing to leave it all on the table because I will,” Jackson said. “I will burn that thing into the ground to win. I’ve been hyper-focused at being on my game on the tree and if you keep winning on Sunday, everything will take care of itself.”

Jackson is always one to forge ahead – and he tested earlier this week in Tulsa ahead of this weekend’s race in Bristol – but he also realizes he’s in the midst of something special, and Jackson isn’t taking that for granted.

“I know how hard it is to win and I know how easily you can fail,” Jackson said. “If you make the wrong run at the wrong time, you can miss qualifying at any race. Just because we won this last race, I approach every race with the exact same goal and that’s to race on Sunday. You can’t take it for granted. I know how hard it is out here and I’m very fortunate to win as much as we do.”

As far as failures go, this stretch a year ago was Jackson’s biggest in his NHRA Pro Mod career. He failed to qualify in Bristol and Norwalk in 2018, and wasn’t even close in Thunder Valley.

He qualified a dreadful 21st at the NHRA Thunder Valley Nationals last season, and if you know anything about Jackson, you know that still doesn’t sit well a year later.

“I’ve got a huge chip on my shoulder for these two races,” Jackson said. “We want to win both of them. When you go to a racetrack and fail, I’m going to have to look those fans in the eye and I owe them to run better than we did last year.”

Bristol will provide far different conditions than Topeka last weekend, and that means a blower combination will be challenged.

Jackson and Stocklin worked solely in the off-season on building a combination that can run well in less-than-ideal conditions. That will be put to the test this weekend, and either Jackson will be watching Pro Mod race from the top of the hill, or he’ll be the one competing in eliminations this year.

“It’s very challenging to run a supercharged car there,” Jackson said. “You’re just not going to have the power, but I think we’re in a better position this year than we’ve ever been.

“Our first goal is to qualify, but I want to win that race, man, so it’s mandatory to come off the trailer and make a good run.”