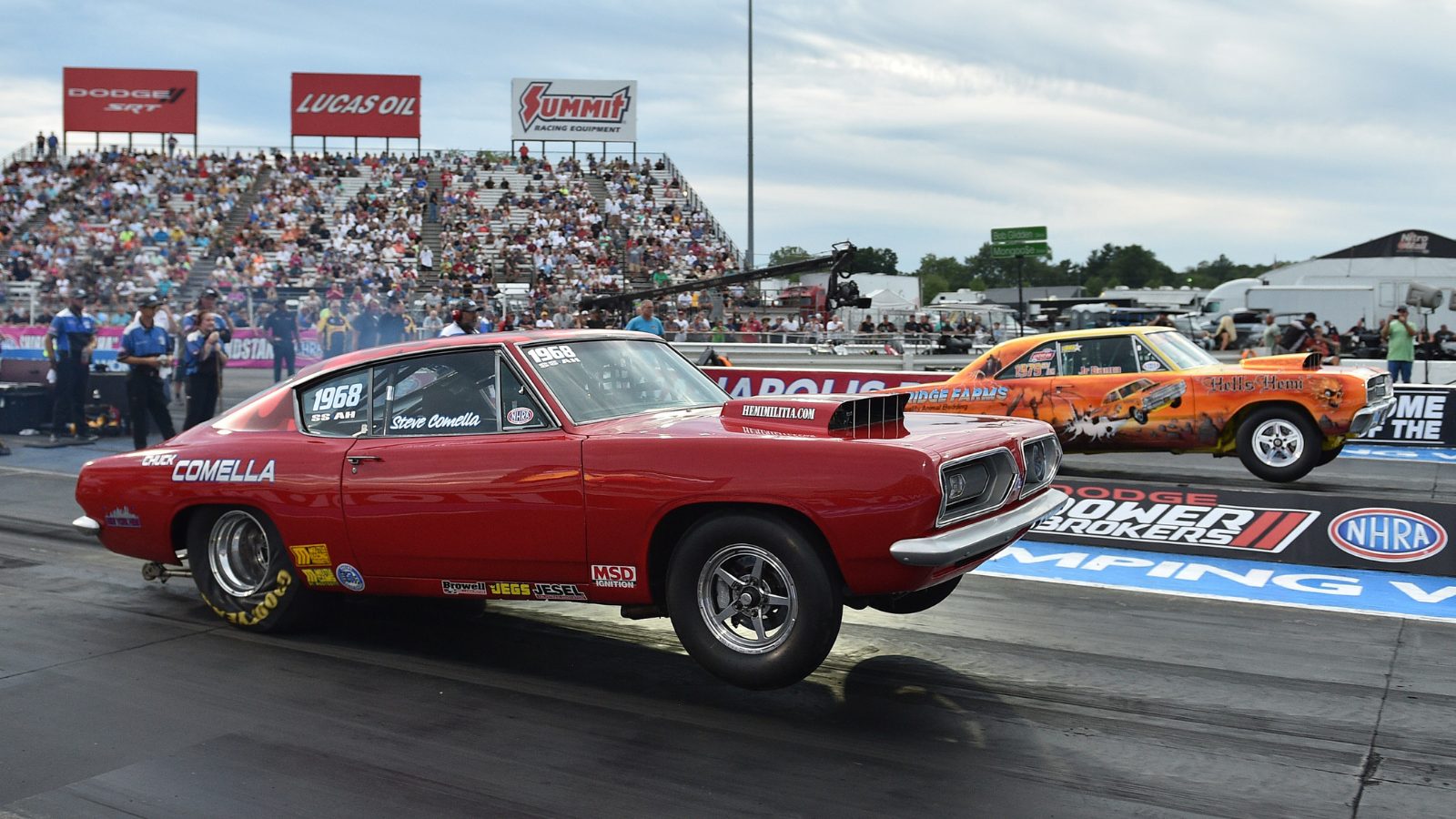 Steve Comella and his vintage 1968 Plymouth Barracuda dominated the Dodge HEMI® Challenge by once again powering from the No. 1 qualifier position through eliminations to repeat as winner at the fan-favorite specialty race that showcases classic Super Stock 1968 Mopar “package” cars in head-to-head battles at the 68thannual Dodge Power Brokers National Hot Rod Association (NHRA) U.S. Nationals.

Comella’s drive to the winner’s circle at Lucas Oil Indianapolis Raceway Park began by edging out Wednesday’s provisional pole sitter Jim Pancake’s ‘68 Dodge Dart with his final qualifying run of 8.421-second at 158.80 mph on the quarter mile track, beating his rival’s (8.491 sec./157.89 mph) quickest lap, to earn his second consecutive No. 1 qualifier position in the 21st year of the longest-running, continuous, specialty race in NHRA history. 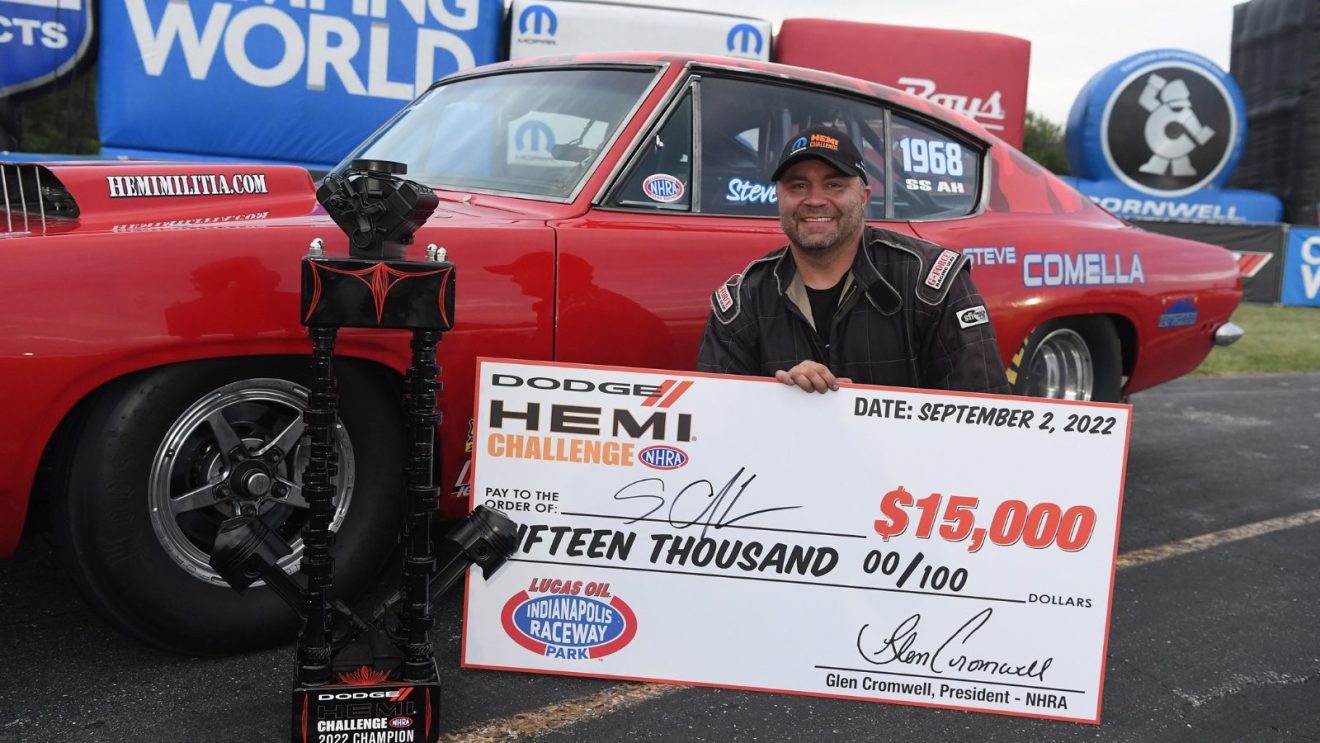 After round wins over Tony DePillo, Richard Locker, Jim Daniels Jr., Comella was paired with No. 8 seed Eldon Baum Jr. in the final eliminations. Baum advanced to his first appearance in a Dodge HEMI Challenge final by turning on winlights against Doug Fazzolore, Benjamin Kimberly, and Gary Wolkwitz.

In the final showdown, Comella took his ’68 ‘Cuda for the quickest run of the event with a 8.407-second lap while his opponent launched his ‘68 Dodge Dart too quickly and triggered a red-light start that thwarted the attempt to dethrone the defending winner.

A two-time finalist in traditional NHRA Super Stock competition, Comella was the 2020 Dodge HEMI Challenge runner-up to Stephen Yantus in an all-Cuda final round. In 2021 he followed up that performance with a pole position and his first Dodge HEMI Challenge win, an exciting head-to-head battle against four-time winner Jim Daniels Jr. (2016-2019), but felt that this year’s showing was a bit more satisfying.

“I didn’t feel like last year was a very representative year, even though [the car] was really fast and we won,” said Comella. “I just wanted to come in this year and kind of run the table and keep it smooth and relaxed. It was important for us to do this this year, to repeat. With these cars there’s always an element of throwing a dice against the wall. I was very comfortable all week with the car. I felt like we had a handle on it. I felt like that before and then it won’t go down the track. So I was cautiously optimistic all week.”

“It’s right up there,” said Comella when asked how he ranked his second Dodge HEMI Challenge victory in three consecutive final round appearances in terms of career highlights. “I tried to play it cool like it was just okay to compete, but [winning] was something I really wanted to do really bad.” 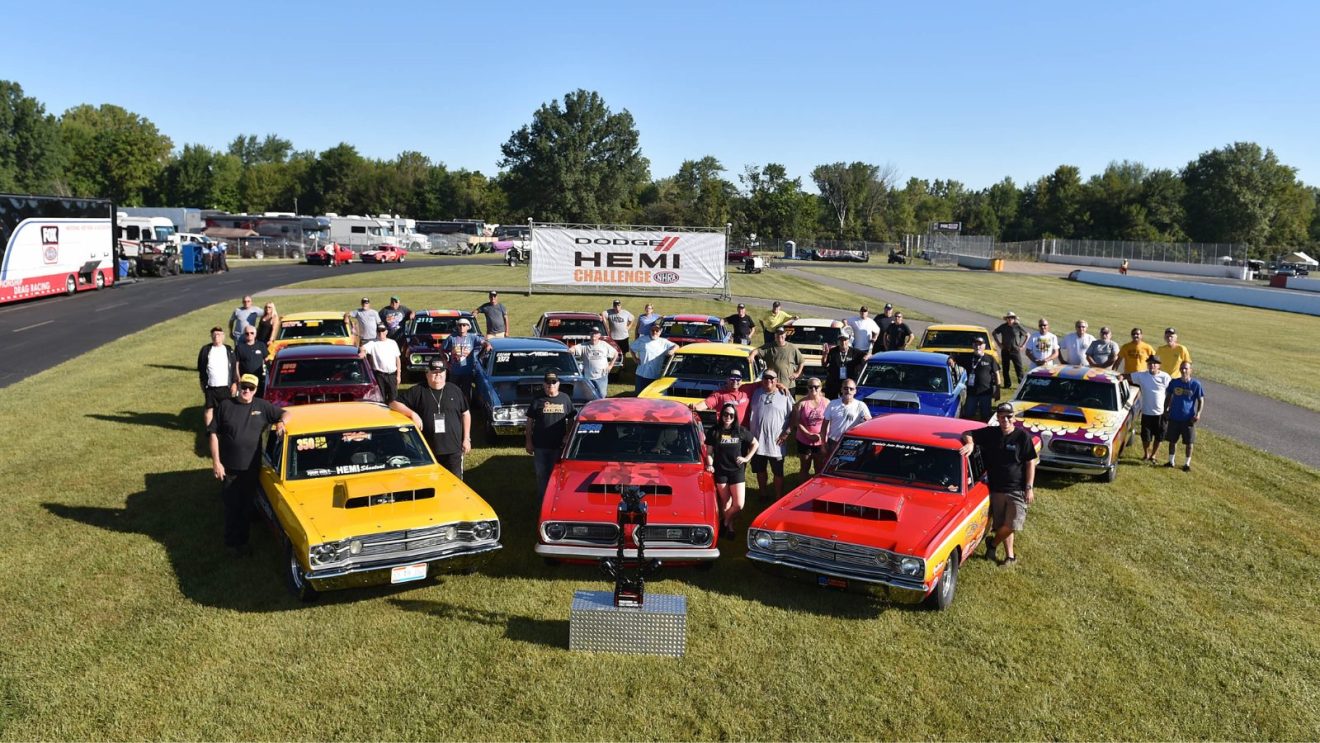 While Comella relished defending his HEMI-powered win, he was especially pleased with the competition he encountered through nine consecutive rounds to earn it, particularly his head-to-head battles with Daniels. Friday’s semifinal pairing with Daniels was a rematch of last year’s exciting final and saw Comella lay down a solid 8.443-second lap to better Daniels’ 8.527-second effort.

“I thoroughly enjoy racing him and his old man [2010 event winner Jim Daniels Sr.],” said Comella. “They are our friends and there is nothing better than racing him. I absolutely love it and I can’t say enough nice things about him. I think he’s a fantastic racer.”