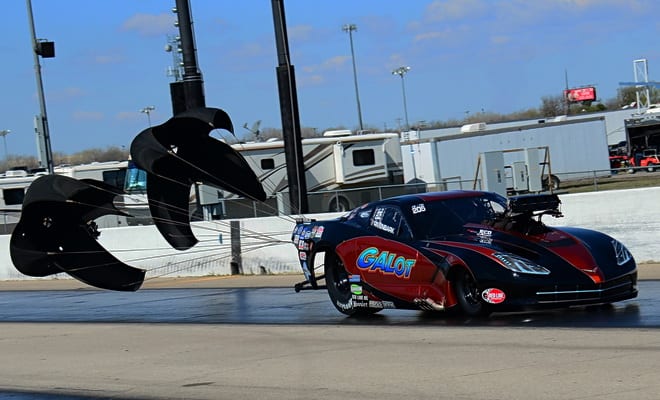 Mother Nature got the better of the PDRA Nationals at Osage Casino Tulsa Raceway Park this evening, as dropping temperatures made the track too cold to safely continue elimination rounds for the all-eighth-mile Professional Drag Racers Association. 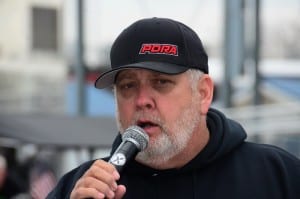 “It’s a call we never want to make, especially after all these great Oklahoma fans came out and supported us all weekend, but with the racing surface at 45 degrees and still dropping it was just getting too cold for these 200-mile-an-hour cars to safely go down the track,” PDRA Race Director Bob Harris explained. “The safety of our competitors is the number-one concern for the PDRA, so with only the semi-finals and final rounds left to run for most classes we made the tough decision to wrap them up next month at Rockingham Dragway in North Carolina.”

Only the Drag 965 Pro Extreme Motorcycle and Talbert Top Jr. Dragster classes were raced to completion at Tulsa, where number-one qualifier Chris Garner-Jones prevailed on two wheels in the final over defending class champion Eric McKinney. Oklahoma’s own Brooklyn Staab won the Jr. Dragster final when Arellyn Garner-Jones was disqualified for leaving before the green light flashed. 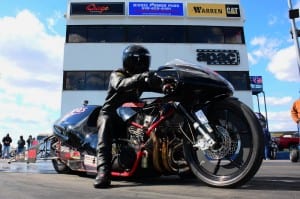 When the announcement came shortly after 8:30 p.m. that the PDRA’s Pro Extreme, Pro Nitrous and Pro Boost cars would complete their semis and finals Apr. 8th within qualifying for the PDRA Spring Nationals at Rockingham, racers from the series’ sportsman teams asked that their remaining rounds also be postponed. The Pro Jr. Dragster semis and final round also will be run during qualifying at Rockingham, while the PDRA Top Dragster and Top Sportsman final rounds will be completed May 20th during qualifying for the PDRA Texas Nationals near Dallas since not all remaining teams planned to make the 1,100-mile trip between Tulsa and Rockingham. The final five teams in the PDRA’s Bracket Bash in Tulsa agreed to equally split that purse and call it a day.

“It’s definitely not ideal and not the way we wanted to end our return to this great facility in Tulsa after missing it on the schedule last year, but it’s important to our racers and to the series that points and purses are earned on the track, whether that happens in Tulsa, Rockingham or Dallas,” Harris said. “We appreciate the assistance and understanding of PDRA race teams and fans for their help in making this happen as painlessly as possible.” 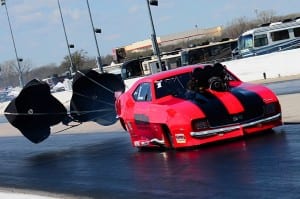 Later, Kirk Piepke of Pauls Valley, OK, and Chris Gulitti of Spring, TX, will race for the MagnaFuel Top Sportsman title in Dallas, as will local Tulsa racer Bob Henry and Mallori Rodgers of McAlester, OK, in the Lucas Oil Top Dragster final.

The PDRA Spring Nationals at Rockingham Dragway Apr. 7-9, will open with a full day of testing, three rounds of qualifying on Friday and eliminations for all classes on Saturday. Additionally, the naturally aspirated, mountain-motored Extreme Pro Stock class will make its first of five appearances this year with the PDRA.