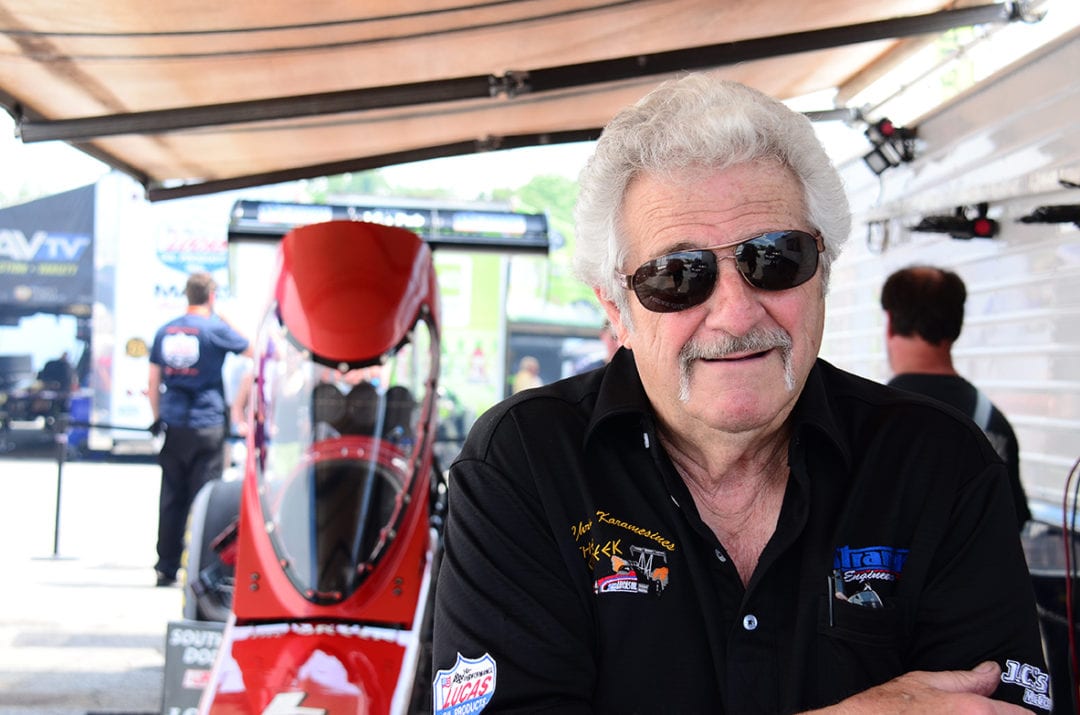 He’s known as “The Golden Greek,” or to friends and fans alike as simply “Greek,” a nickname from a bygone era that survives as a nod to Chris Karamesines’ national heritage. But despite beginning his Top Fuel career six decades ago, Karamesines himself is no relic of the past. As recently as this May he was out there still mixing it up with the heavy hitters of today, competing in the NHRA Southern Nationals at Atlanta Dragway.

Driving a new, closed-cockpit car provided by Don Schumacher Racing, with continuing support from longtime sponsor Strange Engineering and a unique, lifetime commitment from Forrest Lucas at Lucas Oil to keep Karamesines racing as long as he wishes and feels able, the Greek laid down a solid 3.96 pass at 306.53 mph to qualify 14th in Top Fuel before losing a close match to Leah Pruett in round one of racing.

Coincidentally, Pruett’s massive and gleaming Dote Racing rig was parked immediately beside the Karamesines pit at Atlanta, dwarfing the plain-Jane, tri-axle ‘86 Simpson trailer his car had arrived in, pulled behind an equally unassuming black, dually pick-up. Only the man’s name, written in relatively small script high on the trailer’s flanks gave any indication to highway goers that inside rides the nitro-fueled chariot of a drag racing legend. Likewise, between rounds Karamesines and crew chowed down on ham-and-cheese sandwiches prepared by his wife, Sandy, while across the gap between rows of gleaming, million-dollar highway haulers, crewmen and VIP guests noshed on steaming hot cuisine prepared by European-trained chefs.

In many more ways than just his age—which sometimes seems a more guarded secret than national military plans—Karamesines remains a living connection to old school drag racing. When asked, Sandy suggests listing Karamesines “in his mid-80s.” This much is known, he was born on Veteran’s Day between 1928 and 1932, depending upon which source you choose to believe.

Regardless, in 60-plus years on the drag strip, Karamesines became known as a fearless wheelman and consummate match racer. And though he’s never won an NHRA national event, in 2001 Karamesines was named 30th on the NHRA Top 50 list of drivers and five years later was inducted into the Motorsports Hall of Fame of America. Before eliminations began in Atlanta, he spoke with DRAG ILLUSTRATED about his current race program.

When and where did you take your first trip down a drag strip?

1952; Half Day, Illinois; a street roadster, four-door Ford Phaeton. After that, in ’55 I went to Top Fuel and I’ve been here pretty much ever since.

What motivates you to still be out here mixing it up in the big leagues when you could be taking it easy and attracting a lot of attention on the nostalgia circuit?

We still have a couple of my old cars and we do show them and start them up and make some noise for the fans every now and then, but this out here, Top Fuel, this is what I love so I stick with it. After 50-some years it hasn’t let me down and between Lucas and Strange and Schumacher helping me out I’ll keep doing it as long as I can. If I didn’t have those guys I don’t think I could do it; in fact, I know I couldn’t.

What are your goals these days when you go racing?

Well, I’m out here enjoying myself, that’s the main thing, but I still like to knock ‘em off whenever I can. I still want to win. It makes it a lot of fun. And I think it’s good for the sport for me to be out here, it shows the younger guys that they’ve got a good, long career ahead of them if they keep at it.

Is there a certain amount of pride involved for you to be here as the elder statesman of the class, obviously racing on a budget, but still able to compete?

I don’t know about that. The biggest reason we don’t have a big truck and trailer is we don’t have a big enough sponsor to pay for it. I couldn’t afford to buy one of the tires on those trucks. Plus a lot of people go with a set-up like that. They work with about 15 people; we work with four or five people. It makes a big difference.

What is the dynamic like between yourself and the other drivers on the NHRA tour?

Oh, they all come by here and talk to me. I think they respect the fact that I’m still out here doing it and enjoying myself. You have your Kalittas and Forces and a lot of the younger guys that just come by because they appreciate what we’re doing and they just like to see us race.

How do you feel today strapping into a Top Fuel car compared to how you felt when you got started in the class?

Well, today with these cars you’ve got good people working on them who really know what they’re doing. The way Schumacher does it you get a really nice car. The way he puts them together, I feel very confident in this car. It wasn’t always like that. But you always feel a certain amount of concern when you get into these cars, it doesn’t matter what year it is. If you don’t, there’s something wrong with you.

You’re probably the oldest, still active professional race driver in any form of motorsports worldwide, and you’ve often said you’ll continue to race as long as you feel fit enough and capable and it’s still fun, so how is that going?

I always look forward to racing. It’s in my blood and right now I still feel good. If there was something wrong I’d put someone else in the car. I really would. That’s where it’s at.