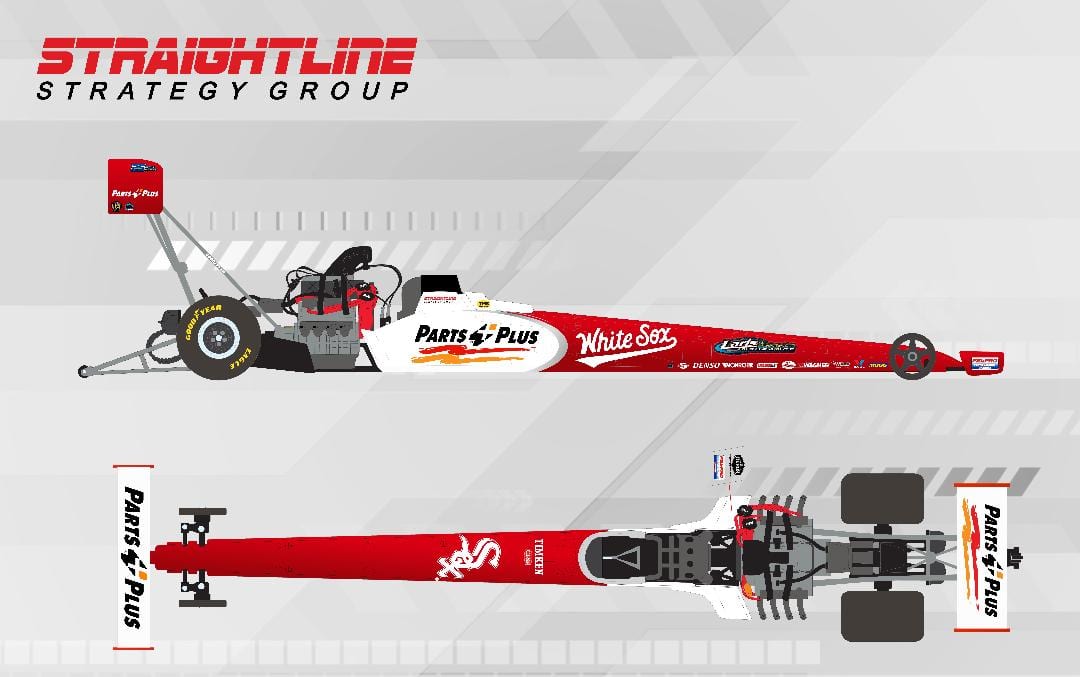 The Chicago White Sox will team up with the Straightline Strategy Group owned, Clay Millican driven Parts Plus Top Fuel Dragster as a major sponsor at this weekend’s NHRA Route 66 Nationals at state-of-the-art Route 66 Raceway in Joliet, Ill.

“Anytime we can cross-market two iconic brands like the Chicago White Sox and NHRA drag racing, it brings another level of passion and excitement to the fans of both sports,” says Steven Cole, SVP Marketing and Sales for SSG. “From Clay throwing out the first pitch to driving his Parts Plus/Chicago White Sox sponsored Top Fuel Dragster, this program is destined to be a home run!”

The White Sox are one of eight charter members of the American League, having played in Chicago since the inaugural 1901 season. Additionally, they have won six American League pennants and three World Series Titles.

This will be the second time Clay has piloted a Chicago White Sox dragster, as his last was back in 1998 during his first ever start at an NHRA event in Chicago. Millican has plenty of history of his own, winning six IHRA World Titles before moving to the NHRA, where he currently holds the Top Fuel E.T. record at 3.628 seconds and has three NHRA career wins. Finishing third in the highly competitive 2018 NHRA Mello Yello Points Series, Millican has his sight set on winning the 2019 NHRA Championship.

“Starting my Top Fuel career in the White Sox sponsored car at Route 66 Raceway was incredible,” says Millican. “Then winning the event in 2018 on the 20th anniversary of my start and of the opening of Route 66 Raceway was unbelievable. Now we are coming full circle with having the White Sox back with us on the Parts Plus dragster. It’s going to be a special weekend.”

Millican will also have the honors of throwing out the first pitch at the White Sox game against the Cleveland Indians on Thursday. The Chicago White Sox bannered Top Fuel Dragster will be on display at Guaranteed Rate Field, home of the White Sox.