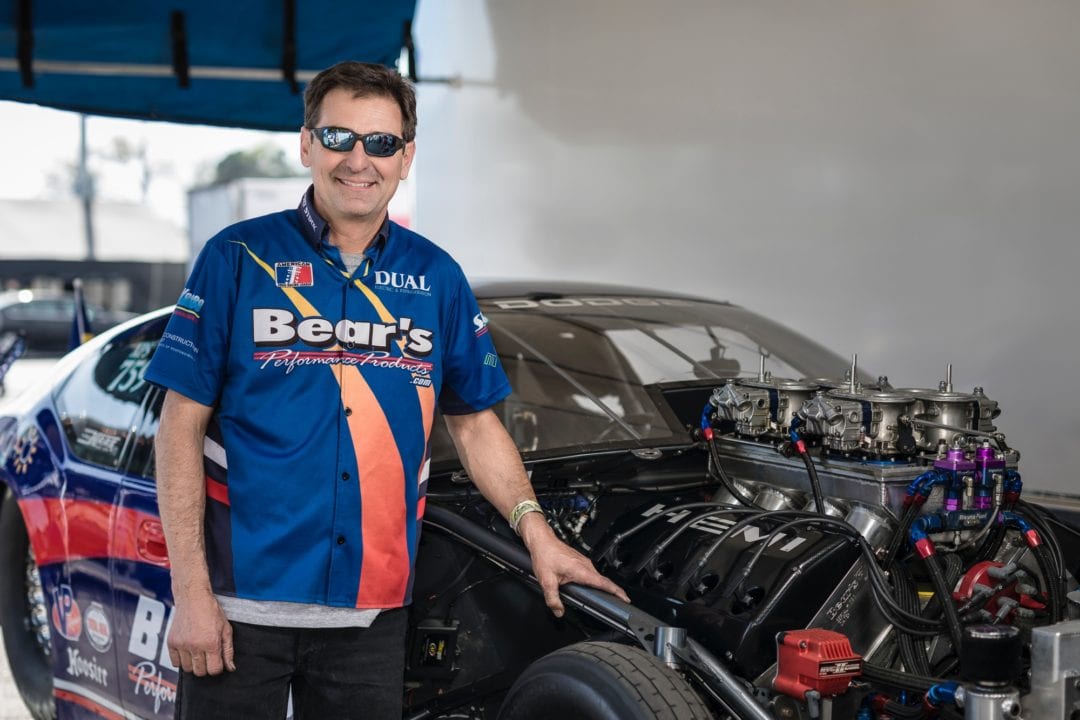 When Jeff Dobbins lit up the scoreboard with a 4.007-second blast in Thursday testing at the 2018 PDRA East Coast Spring Nationals at GALOT Motorsports Park last April, he had everyone believing the first-ever 3-second eighth-mile pass in a Mountain Motor Pro Stock car was right around the corner.

It would be another seven months before Dobbins would lay down a 3.988 at 181.62 mph in testing before the PDRA World Finals in October. Despite cool track conditions during the season finale, the PDRA closed the 2018 season without an official 3-second run in Liberty’s Gears Extreme Pro Stock.

This season, Dobbins and engine builder Larry O’Brien plan to make the record official with the Bear’s Performance ’14 Dodge Avenger. The duo’s priority since partnering late in 2017 has been to crack the elusive barrier in competition. Doing so in testing isn’t good enough, even though the car was in legal trim and rolled across the scales 10 pounds overweight.

“When we finally broke into (the threes) in Virginia, we were super-excited, but what happened after that run – when we couldn’t make it official – just proves how hard it is to do,” Dobbins says from his Wilmington, North Carolina, home one month before the season opener. “There were three opportunities over the weekend to set the record. One run I took it 150 (rpm) too high. Everything has got to be so perfect to make that run.” 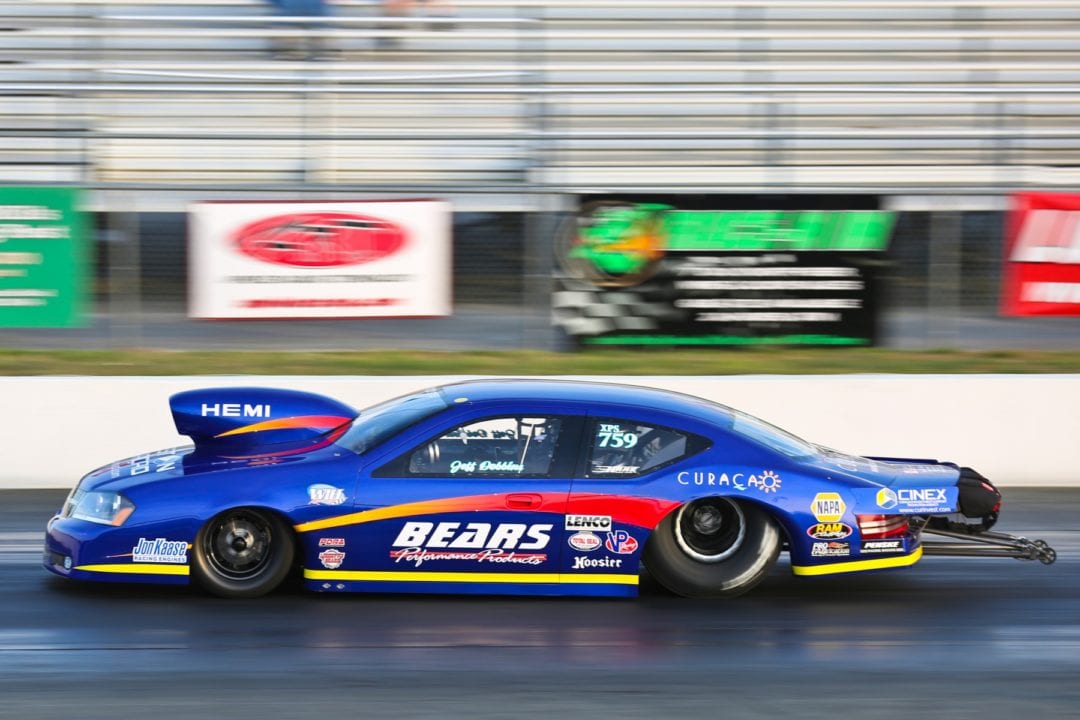 Even with a 3-second time slip in his logbook and a run data file to go with it, Dobbins points out the challenge that still lies ahead for himself and his competitors. “It’s so close right now, but it’s still so far away from everybody,” Dobbins says of the 3-second barrier. “I kind of feel like we’re in the front of it because we’ve done it, but even with having that information, it’s going to be super-hard to do. Everything’s got to be perfect.”

Perfection is required from both man and machine, with O’Brien and his Oldcastle, Ontario, Canada-based Bear’s Performance shop handling the horsepower aspect. Dobbins, a Mountain Motor Pro Stock veteran, is responsible for driving and tuning the car, two daunting tasks given the current competition level in Extreme Pro Stock.

“There’s a lot of pressure when you’re trying to make that first run (in the threes),” Dobbins admits. “Obviously, they’ve got to be one of the hardest cars on the planet to drive. We’re in fifth gear at 3.8 (seconds) into the run. We have to shift it. There’s a lot going on in one of those things. To be perfect is tough. It’s really hard to drive that thing.” 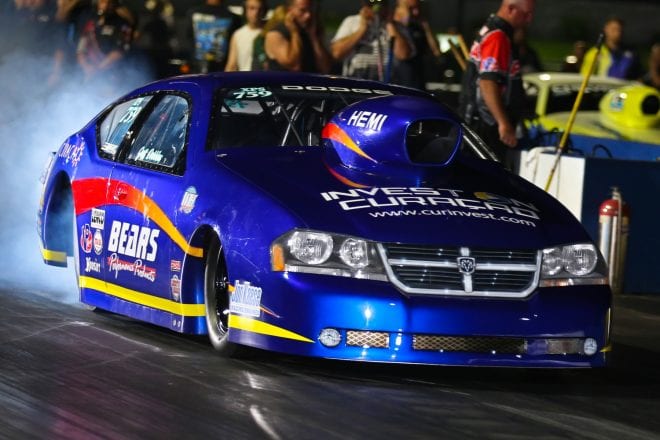 When it comes to the weather conditions that will be required to run the first official 3-second pass, Dobbins believes the perfect conditions actually aren’t “perfect” in the traditional sense. “In preseason testing at GALOT last year, it was 1,800 feet (density altitude),” Dobbins says. “Actually, if it can be 1,000-1,500 feet DA, I think it would be easier than when it gets into those mineshaft conditions like it was in Virginia. It’s harder to do it in those conditions. I’m confident that we can get into the threes in up to 2,000 feet DA. It would be easier for us than if it was 700 feet below sea level or even zero. It’s too much barometer, too much power. It can get too good.”

Whatever conditions present themselves at the 2019 PDRA season opener, the East Coast Nationals presented by FuelTech, April 4-6, at GALOT Motorsports Park, Dobbins and the Bear’s Performance team will be ready to attempt the historic mark and answer the question, “Who will be the first to the threes?”

Intense reviews of data from last year’s numerous low 4.0-second passes have turned up previously overlooked areas of the car’s performance that should translate into high 3.9-second runs. “That’s what we’ve been working on over the winter, trying to find the other stuff that might help. And maybe we can get the old driver tuned up,” Dobbins chuckles. 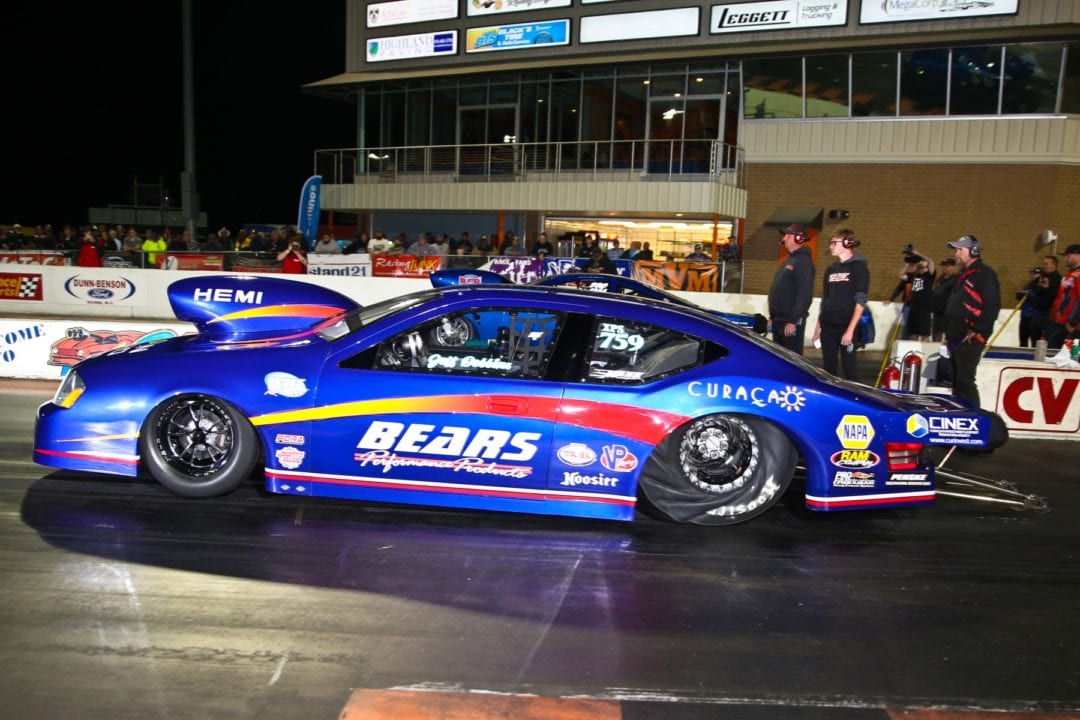 While the minutiae of Dobbins’ operation have been adjusted, the major components remain unchanged for the 2019 season. O’Brien will continue providing the 830ci Hemi-based engines and Dobbins will continue to race with support from the Curaçao Tourism Board and the Curaçao Investment & Export Promotion Agency (CINEX). His team will also look the same when they roll to the starting line for the first test pass of the year.

“I’m fortunate to have the deal with Larry going and I’m fortunate to have a couple financial partners in the islands to help me make my end happen,” Dobbins says. “It’s a three-way partnership, in my opinion. I make the calls on the car. I got my main man, Tom Coon. He’s just excellent around the car and takes care of a lot of things for me. Him and I will bounce a lot of stuff of each other.

“I also have to thank, of course, my whole crew, including my wife and Larry’s wife,” Dobbins adds. “It takes a lot of effort and sacrifice from a lot of people to do this.”