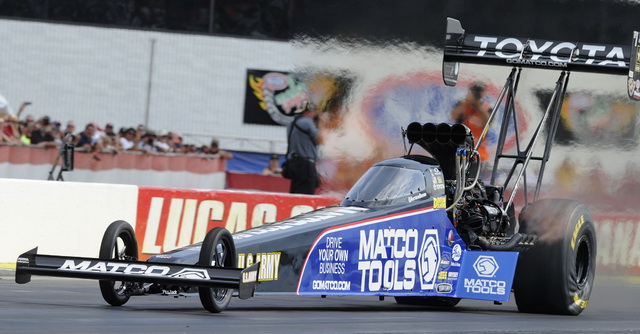 This past weekend in the first of six NHRA Countdown to the Championship events near Charlotte, defending Top Fuel World Champion Antron Brown failed to qualify his Matco Tools-backed dragster for eliminations, thus ending the seventh-longest qualifying streak among active professional NHRA drivers.

It stopped Brown’s run of qualifying at 110 consecutive events, dating back to November 2008, and also was only the third time in his 16-year pro career and 281 NHRA events that he was not racing on eliminations day. 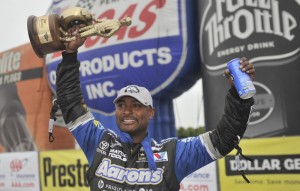 “You never imagine that something like that is going to happen,” said Brown, who dropped from sixth to ninth in the standings and left him 124 points behind DSR teammate and points leader Spencer Massey.

“And we never imagined that’s how we’d start the Countdown.”

One year ago Brown made a statement when the NHRA Mello Yello Series visited the Dallas area for the second Countdown event and he hopes to repeat history this weekend (Sep. 20-22), during the AAA Fallnationals at the Texas Motorplex. Brown rallied to win last year’s event in Texas after losing in the first round the previous week to start the 2012 Countdown playoff. That provided momentum for him to win his first NHRA world championship two months later. 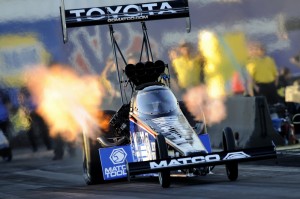 Faced with a much higher mountain to climb this year, however, the popular driver for Don Schumacher Racing will need to make his boldest declaration of the year if he is to defend the prestigious Top Fuel championship. Only 10 drivers qualified for the Countdown after the 18-event regular season, so Brown not only has to make up the 124-point deficit in five races, but has to get around eight other drivers to reach the top of the standings.

“Sure, it’s going to be hard but we haven’t given up on getting back to the top; no one on this team ever gives up,” Brown stressed. “We spent Monday testing at zMAX Dragway (near Charlotte) and we made some great runs. Now we have to do that once we get to Dallas.”