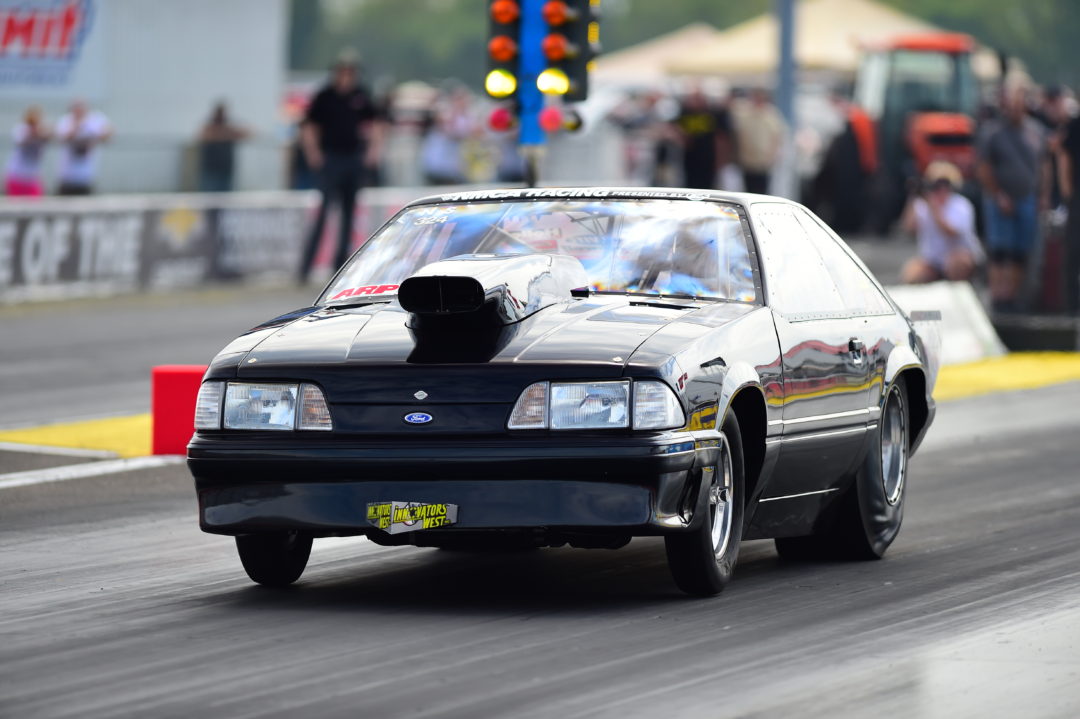 The 18th Annual NMCA World Street Finals presented by Chevrolet Performance, which was hosted at Lucas Oil Raceway Indianapolis September 19-22, 2019 marked the end of a successful season of NMCA Drag Racing presented by E3 Spark Plugs, and culminated in the crowning of class champions who had worked the hardest all year and found their place in the Aerospace Components Winner’s Circle.

Framed by the legendary Dave Duell Classic, Nostalgia Super Stock All-Star Shootout, and the Chevrolet Performance Challenge Series, the NMCA World Street Finals did not disappoint, and one only had to look at the VP Racing Fuels Xtreme Pro Mod qualifying sheet to see just how tight the racing could be.

Twenty-two cars attempted to qualify for the 16-car field, and the top spot changed every round. John Stanley put his blown Cadillac CTSV above all else with a 3.725, and the entire field was separated by less than a tenth of a second making it the quickest field since the inception of the Xtreme Pro Mod format. Stanley struck the tires in round one, allowing number 16 qualifier Stephan Stringer to advance. In the final round, Stringer drilled the tree and took the holeshot win with a 3.80 at 196 to Jim Widener’s nitrous-backfiring 3.78 run. 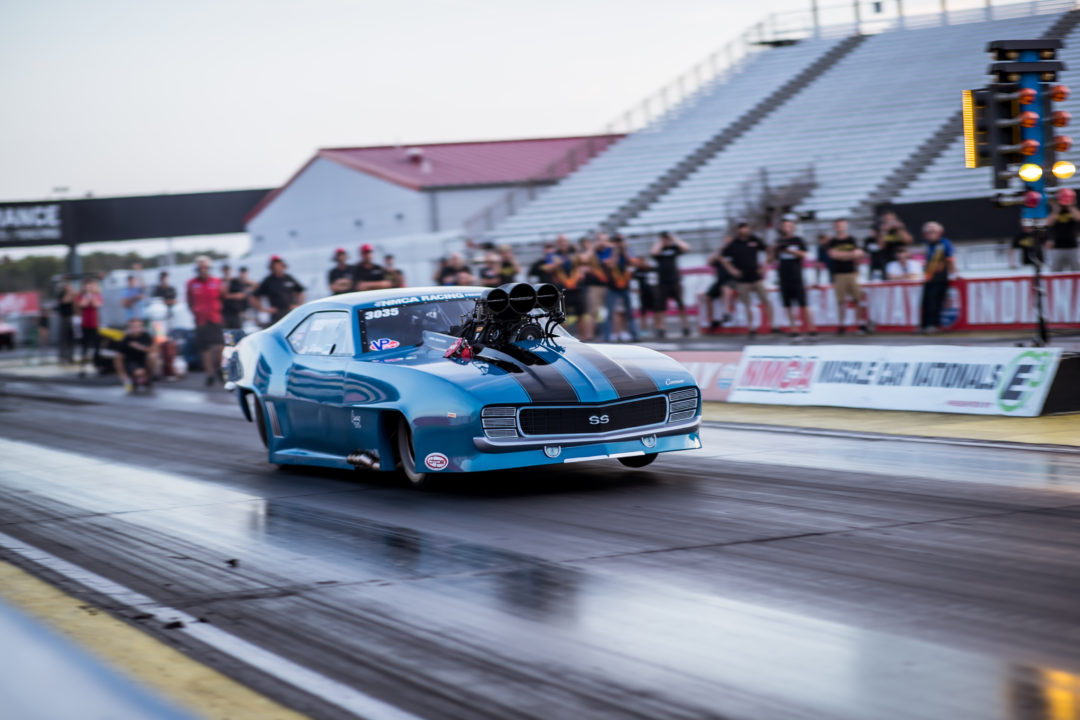 Shawn Pevlor, who led qualifying at the previous race in Ohio, topped the Mickey Thompson Street Outlaw sheet this weekend as well with a 4.33 effort from the BES Racing Engines Mustang. Pevlor advanced round by round to the finals where he fell to the hard-charging Rob Goss in a 4.38-to-4.55 match.

The Holley EFI Factory Super Cars category has been hotly contested all season long, and while Bill Skillman sailed in to this event with a huge points lead, it was Chris Holbrook who lead the qualifying charge with a 7.80 at 176 mph. Holbrook broke on a mid-round bye run and in the finals, Bill Skillman edged out Randy Eakins, 7.95 to 7.96.

Billy Glidden dusted off his legendary black Fox-Body Mustang, tuned up it’s small-block Ford engine, and entered the ARP Nitrous Pro Street class. Glidden was immediately quick from the start of qualifying and grabbed the top spot with a 4.34 at 164mph performance. He advanced round by round until he met Tony Gillig in the final round. Glidden unleashed a 4.31—his quickest run of the weekend—to arrive at the finish line first, with Gillig not far behind with a 4.36.

In Edelbrock Xtreme Street, longtime racer Scotty Guiler claimed the top spot in qualifying with a 4.710 at 150 mph. Guiler knocked the tires off early in eliminations, allowing Jessie Coulter to advance, but Coulter couldn’t make the final-round lane call due to breakage, which allowed Tim Knieriem to take the win light uncontested and the trip to the Aerospace Components Winner’s Circle.

High RPM is the hallmark of the FST Carburetors NA 10.5 class and the engines were singing at the tops of their cylinder heads this weekend. Leonard Long, collected another lead qualifier with a 7.83 pass in his manual transmission-equipped, SN95 Mustang. Long waded through the crowded field to meet Dwight Ausmus in the final round of competition. There, Long drove to a winning 7.86 over Ausmus’ 8.03.

Defending Chevrolet Performance Stock presented by Scoggin-Dickey Parts Center champion Jesse Wilson collected a win at the last event in Norwalk, Ohio, but it was Haley Burkhammer who led qualifying in Indy with a 10.19 in her Camaro. Burkhammer continued her quest for victory until she faced Scott Brown in the final round. There, Brown took the advantage at the tree, but Burkhammer powered around him with a winning 10.19 to Brown’s 10.25.

Along with the Dave Duell Classic, the NMCA’s Quick Fuel Technology NSS cars squared off against the Victory Performance Parts NSS cars in the All-Star-Shootout. This is the 4th year for the shootout and the NMCA contingent made it three wins to one. The final round featured two NMCA racers, with Jeff Ryan Goodin victorious over Corky Bumpus. Racers and fans alike celebrated at the NSS party held at the end of the night.

Bill Skillman blasted to an 8.03 in his other Mustang Cobra Jet to lead qualifying in Coan Engineering Stock/Super Stock Combo, but making it all the way to the final round of eliminations were Brian Livengood and Jeremy Duncan and their pair of 1969 Camaros. Livengood was .016 at the light and drove to the Aerospace Components Winner’s Circle with a 10.468 on a 10.46 dial in versus Duncan’s 9.826 on a 9.81.

There was no lack of rounds to be raced in the Quick Fuel Technology Nostalgia Super Stock category this weekend, and after the dust had settled, it was Ricky Newmeyer who took the win over Kevin Miller in the final round of competition.

In Detroit Truetrac Nostalgia Muscle Car, Noah Winters found himself in the final round once again, but unlike the last race in Norwalk where he runner’d up, Winters was successful in his bid for a win, after defeating Jeff Toepper in the final round here in Indy.

MagnaFuel Open Comp’s Donnie Edmonds logged a .002 reaction time in his Chevelle to lead qualifying, but it was Norwalk winner David Rickey, who not only took home the win in the Proform Rumble category in Indy, but who also drove to the win over Larry Geddes in the final round of Open Comp.

Don Baskin Truck Sales Factory Appearing Stock Tire (FAST) racers were in action at this event, and Terry Pennington was the number one qualifier with a 9.943 and once again took home the win in his L-88-powered Corvette. Joining him in the Aerospace Components Winner’s Circle was his wife, Julie, who was also at the top of the qualifying sheets with an 11.004 and collected the overall win in the Cor-A-Vent and Autorama Auto Sales Factory Stock class.

The NMCA would like to thank all of its racers and fans for a great 2019 season. Class champions will be crowned in the Aerospace Components Winner’s Circle at the NMCA awards ceremony held during the 2019 Performance Racing Industry Show right in Indianapolis in December, and then the focus turns towards 2020, when the World’s Fastest Street Cars return for another season of the NMCA racing.