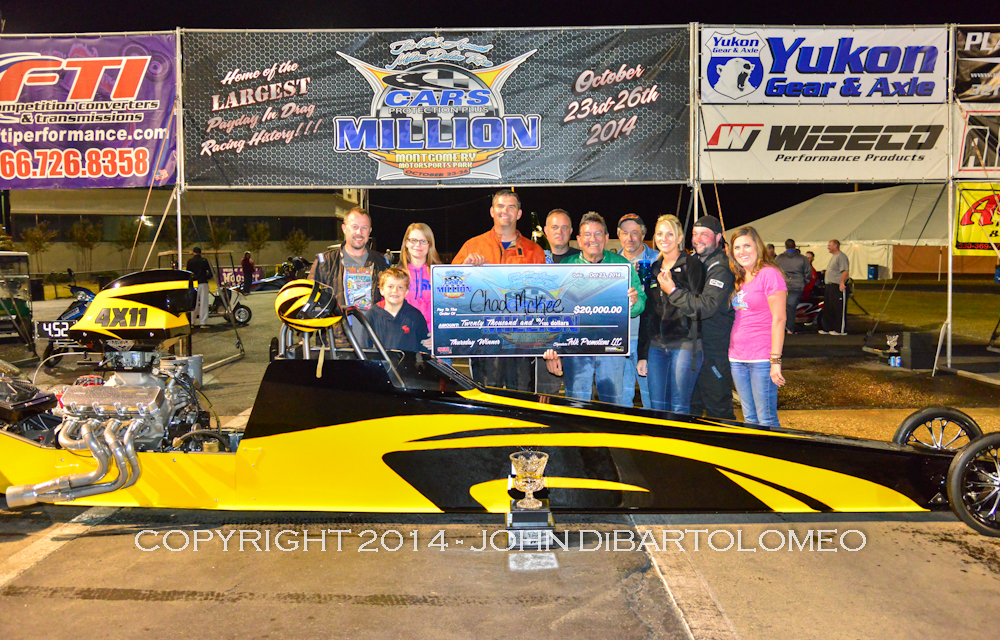 Chamber of Commerce weather greeted over 400 entries on Day 1 of the C.A.R.S. Protection Plus Million Dollar Drag Race at Montgomery Motorsports Park in Alabama. Possibly never before in the history of any race has there been a zero-percent chance of rain predicted for the entire weekend. And with clear blue skies and temperatures in the 70s, racers came out to compete at the 19th edition of this famous race.

Due the amount of cars, it was announced there would be no buyback round today. Two go down and one comes back, just the way drag racing is supposed to work. Everyone was afforded an open time trial session followed by one time run for all beginning at 9:00am. As it was, time trials weren’t completed until 3:30 when the first round began with door cars up first.

As has been the custom at this event along with several other big buck bracket races, door cars run separate from the dragsters until the later rounds. This gives the door car racers the ability to run a number of rounds to get into the swing of things before they’re paired up with dragsters. At last year’s Million Dollar Rae, two door cars; Kenny Underwood and Dave Triplett; squared off in the finals where Underwood added his name to the list of Million Dollar winners. Ironically, Triplett; your ’08 Million Dollar winner; was attempting to become only the second racer in the history of the event to win twice (Gary Williams – ’04 and ’07).

For the first round which took three hours to complete, 427 cars traveled down the Montgomery eighth-mile with roughly 188 of them being door cars. In the seventh round with seven cars left, the pairings had Tim Thomas receiving the last bye run of the race, while Chad McKee faced off with Lester Adkins with McKee earning the win. Jason Rich and John Labbous Jr. squared off with Rich moving on to the semifinal round. And finally Jerry Brewer and the last door car left of Steve Collier raced with the door car of Collier hanging tough.

For the semifinal round of four, Thomas outlasted Rich and the lone door car left was uncharacteristically slow in the reaction time department to allow McKee to move on to the $20,000-to-win final round.

For the final round, two great reaction times separated both competitors by only one-thousandth of a second, with McKee running closer than Thomas to his dial-in for the $20K win.