One look at Ron Capps after he lost in the opening round of this past Sunday’s U.S. Nationals told of his disappointment over once again being left out of winner’s circle celebrations at the most prestigious race of the season. It was the 16th year he had fallen short of winning Indy.

It also was one of the few times during this year’s NHRA Full Throttle Drag Racing Series season that he struggled to find a way to put a positive spin on not winning a race.

“There was something wrong with the lane, but you can’t blame it on that,” said Capps, who qualified No. 3 for the rain-delayed event near Indianapolis. “We don’t make excuses. Our car hasn’t done that since the fourth race this year in Vegas, and that was before Rahn Tobler came over to be our crew chief. 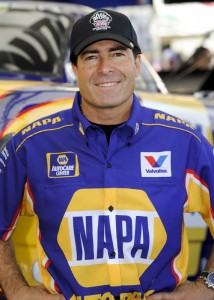 “You look back at what we did earlier in the year with the six finals rounds in a row, and everything Rahn Tobler has done with the NAPA car has made it one of the best cars in every type of (track and weather) conditions we’ll experience. That will be the key.”

There was solace for Capps, however, in knowing the and the NAPA AUTO PARTS team will start the NHRA Countdown to the Championship this weekend as the top seed that will give him a 30-point lead when points are reset for the top-10 drivers advancing into drag racing’s playoff.

That leaves one more racing dream achievable this year: He also has not won an NHRA season championship through 15 full seasons although he has been runner-up three times including 2005 when he lost to DSR teammate Gary Scelzi by a eight points.

This is the second time Capps started the Countdown as the top seed, and in 2007 he trailed off to finish fourth.

“I’ve had good cars and good teams before when I thought I had a good chance win the championship, but something happened each year,” said Capps, who has won 36 NHRA titles in 381 events.

“You have to focus on what you’ve done right, and you need a little bit of luck at least once during the Countdown.”

The veteran from San Luis Obispo, Calif., and the NAPA team have won three titles in six championship round appearances, earned two poles and produced the quickest ever time (3.964 seconds) at the second best speed ever (320.89 mph) but sees this weekend as the start to a new season.

“I learned a long time ago, believe me, not to take anything for granted. When we’re running good I’ll be the last guy talking smack. You thank God any time you can go to the winner’s circle. It’s so tough to do that now.

“You can’t get cocky. The guys who jump up and down after they happen to do well or win a race early in the Countdown will be the ones who are going to fade quick.

“We’ve seen a lot of strange things happen in the Countdown like when Robert Hight went from 10th to first (in 2009).

“The class is as stacked as it has ever been. That’s why we were so bent on getting that No. 1 spot and the extra 20 points.”