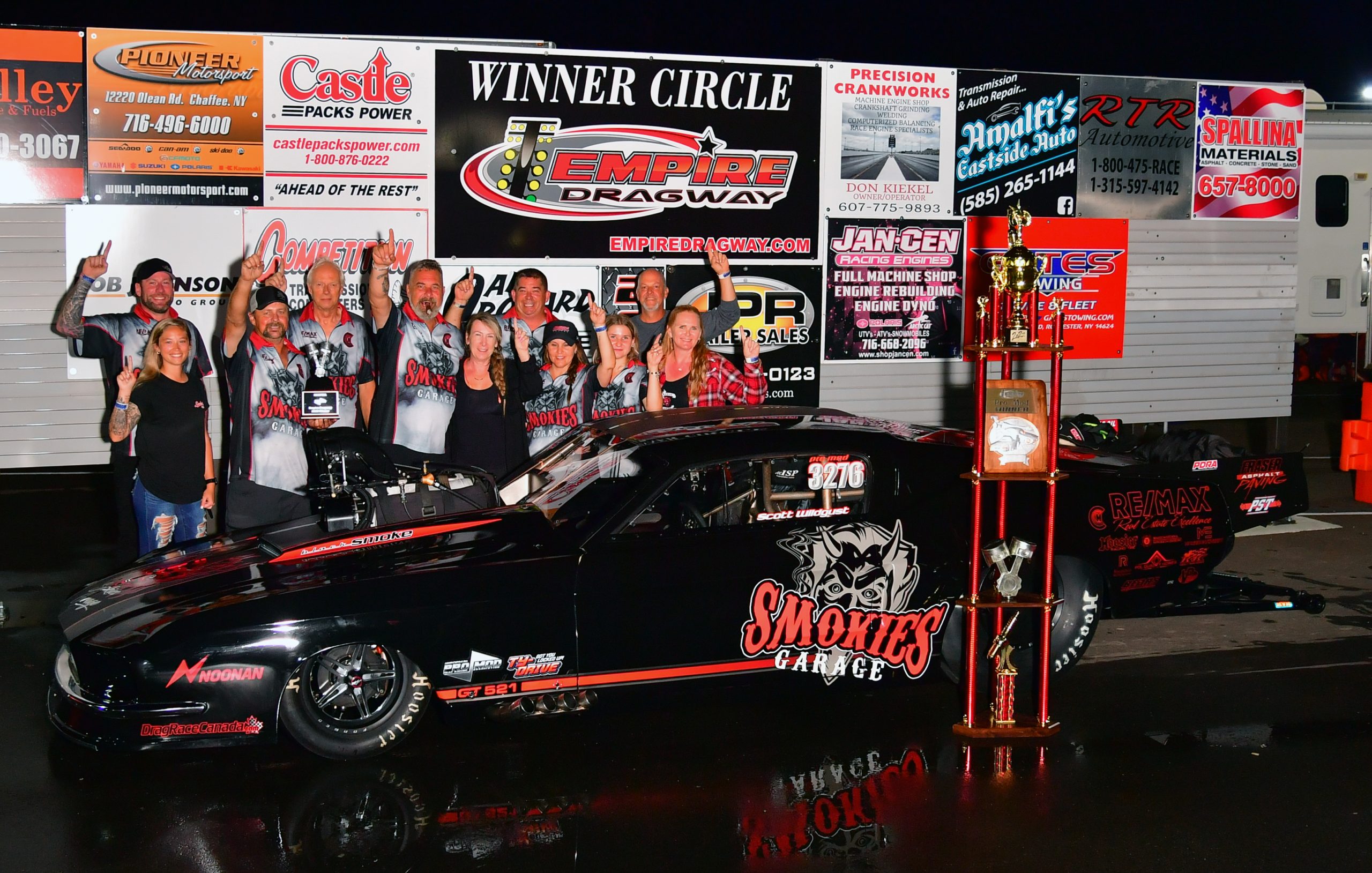 In a side-by-side final round, Scott Wildgust nosed out Northeast Outlaw Pro Mod Association (NEOPMA) veteran Kevin McCurdy to pick up his first-ever NEOPMA win at the Empire Northeast Outlaw Pro Mod Challenge III Saturday night at Empire Dragway. Wildgust recorded a 3.705-second pass at 204.82 MPH in his screw-blown Smokie’s Garage ’67 Mustang to beat McCurdy’s 3.71 at 201.70 for a .006 margin of victory.

“That was probably one of the closest rounds I’ve been on the winning side of in a long time,” said Wildgust, who was making his NEOPMA debut at the series’ fifth race of its 30th anniversary season. “We both had killer lights. Just nipped him in the lights. It was tough to see at night when the win light came on. It was definitely a close race, that’s for sure.”

The Empire Dragway event was somewhat of a home race for Wildgust, who lives across the border in Stratford, Ontario, Canada. Wildgust’s Mark Savage-tuned ’67 Mustang steadily improved through qualifying, ending up with a 3.7323 at 203.62 to edge out Mike “Hollywood” Decker III’s 3.7328 for the No. 4 spot.

Wildgust then opened eliminations with a 3.751 at 203.99 to beat Matt Guenther and his nitrous-fed ’69 Camaro. He ended up with a single in the second round, as Mike Janis wasn’t able to make the run in Mike Thielen’s new ’69 Camaro. Wildgust ran a 3.714 at 204.08 to move on to the semis, where he was met with another single. He was set to face NEOPMA newcomer Joe Newsham, who walked away from a frightening crash in the second round. Wildgust’s 3.700 at 204.73 gave him lane choice in the final.

Wildgust and McCurdy were side-by-side from stripe to stripe, with Wildgust’s .019 reaction time leading McCurdy’s .020. Wildgust threw down a consistent 3.706 at 204.82 to hold the lead over McCurdy’s 3.71 at 201.70 as they crossed the eighth-mile finish line.

“We kind of used this weekend as a test session because we’ve been really struggling learning the hot track setup,” said Wildgust, who thanked Mike “Smokie” Clark of Smokies Garage, longtime crew chief John Weima, Team Wildgust RE/MAX, Fraser Asphalt Paving, Morrison/Everitt, Resolution Racing Services, K&K Racing, and Bear’s Performance. “We’re just not used to running on hot racetracks. We tried some new combinations and obviously it paid dividends for us. The car is starting to come back to our A-to-B program and running pretty strong again.”

While the Empire Northeast Outlaw Pro Mod Challenge III was Wildgust’s first NEOPMA appearance, he hopes to join the series again soon. He praised both NEOPMA and Empire Dragway officials for their efforts over the weekend, which included multiple rain delays.

“They’re really good people,” Wildgust said. “They’re very accommodating. The track prep and organization were great. It’s a really good series. We were very happy to be a part of that race.” 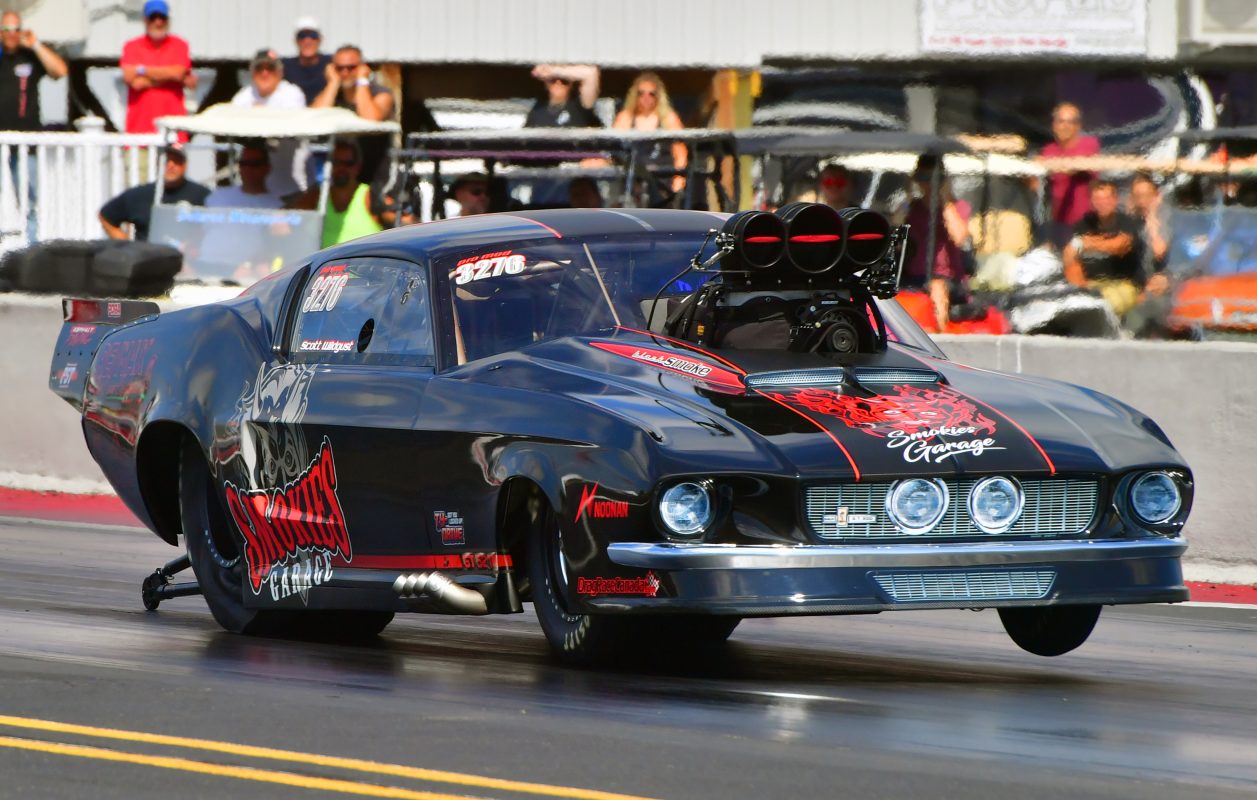 McCurdy, a past NEOPMA champion, qualified third with a 3.727 at 200.89 in the ProCharger-boosted Hard Racing ’68 Camaro. The Patrick Barnhill-tuned hot rod progressed through eliminations, starting with a 3.999 victory over Louis Ouimette in the first round. McCurdy stepped up to a 3.756 at 200.36 to defeat teammate Tyler Hard and his 3.793 in the second round. McCurdy and semifinal opponent Spencer Hyde both posted 3.723-second passes, but it was McCurdy’s .008 reaction time that sent him to the final to face Wildgust.

“What a great way to close out our second stop at Empire,” said John Mazzorana, founder and president, NEOPMA. “That final round was a thrilling representation of what we have to offer to racers, fans, and tracks. We always encourage new teams to join us, and it was great to have Scott Wildgust and a few other Canadian teams race with us at Empire. It was also nice to see one of our regulars, Kevin McCurdy and the Hard Racing team, back in the final round.

“We’d like to thank Jerry Scaccia, Patrick Budd, and the whole Empire Dragway staff for their efforts to provide us with a safe, fast racetrack,” Mazzorana added. “From the cool conditions in June to the hot conditions and rain we dealt with over the weekend, the track was always fantastic. We got so much rain that I wasn’t sure if we’d get the race in, but everyone at the track worked together to complete the event.”

“We were fortunate to have 17 cars attempt to qualify,” said Mazzorana. “I know Empire is a long tow for a lot of our racers, so I appreciate everyone who made the trip. I’d also like to thank Kurt Steding and P2 Contracting for contributing to our payout fund for this race.”

The next stop on the NEOPMA’s 30th anniversary tour is in just two weeks, August 19-20, for Maryland International Raceway’s IHRA Sportsman Spectacular.