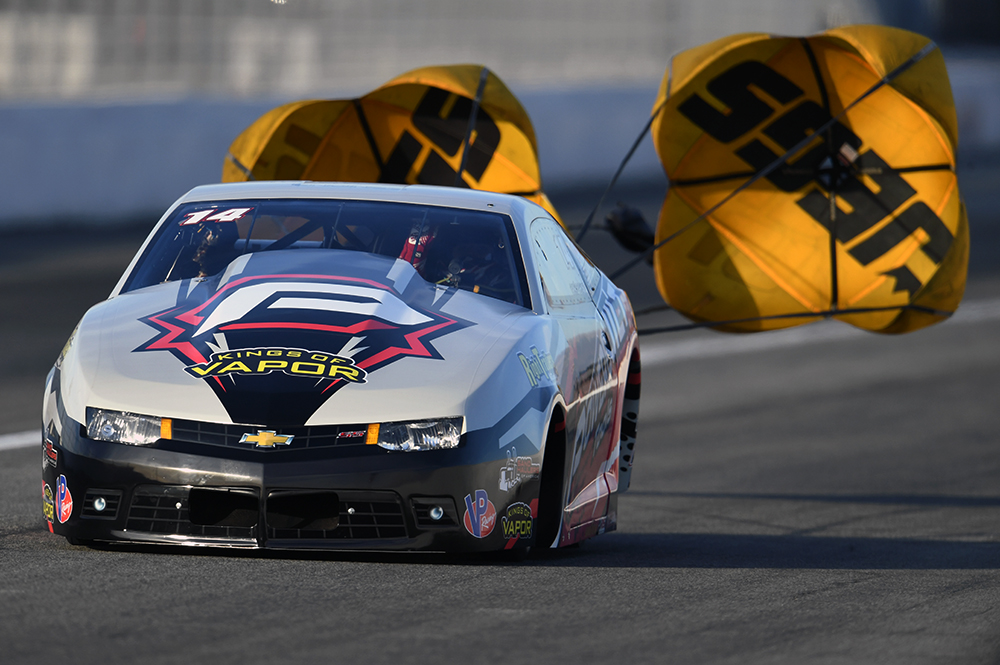 Pro Stock driver Camrie Caruso continued to make positive strides in her rookie season securing her first round win in only her second professional start today at the NHRA Arizona Nationals. Through two days of qualifying Caruso drove her Powerbuilt Tools Chevrolet Camaro to the No. 8 qualifier spot, her second consecutive top half qualifying effort. In the opening round she had lane choice over up and coming driver Cristian Cuadra. The 23-year-old racer from Denver, North Carolina was confident in her team and the Titan Racing Engine power under her hood.

Caruso and Cuadra were the first pair of Pro Stock race cars to hit the track. The race was Caruso’s from the start as she got a jump off the starting line and drove her Camaro to victory with a winning elapsed time of 6.538 seconds at 210.08 mph over Cuadra’s slower Ford Mustang. Caruso never trailed in the drag race and became just the third female in history to win a round in NHRA Pro Stock competition.

“The round win was good and exciting,” said Caruso. “I am glad we got that out of the way. I have a great team with Mike Smith and the engine program, Jim Yates as my crew chief and the support of all my family. That kind of support has definitely helped the program move forward.”

In the second round Caruso raced the No. 1 qualifier Kyle Koretsky and the rookie of the year favorite once again had a strong race car. It was a race between a second generation and third generation driver as Kyle is following in his father Kenny’s footsteps and Camrie has the benefit of her father and grandfather’s racing pedigree. These two young drivers are destined to cross paths many times this season but today it was Koretsky who got the win light.

Caruso did not have one of her usual strong reaction times and in the Pro Stock category being second off the starting line many times equates to hitting the finish line in second place. Caruso’s Camaro made another strong run of 6.566 seconds, but Koretsky was a little quicker at both ends getting the quarterfinal win light.

“The guys were on point even in round two. I let them down as a driver,” said Caruso. “We are going to do some testing before Gainesville. The staging process is something we are continuing to work on. I was strong in testing but that hasn’t translated to eliminations. I want to be better for myself and for my team. We are doing great for the newness of the team, but we are not as good as we can be. We all know we can be better. We are going to work together on all aspects of the team to improve.”

All weekend fans streamed to Caruso’s pit area where her Powerbuilt Tools Camaro was parked. With the support of not just her primary sponsor but also Global Emissions Systems Inc. (GESi®), NGK Spark Plugs, VP Racing Lubricants and Right Trailers, the early favorite for NHRA Rookie of the Year is ready to continue to improve. With an off week before the historic Gatornationals Caruso is going to take advantage to make improvements but also take some downtime.

“I think the time off is good and bad,” said Caruso. “It will be nice to get the car back to the shop and go over the race car and the engine head to toe to get ready for Gainesville. The downside is I like being in the car week after week because that kind of repetition is so valuable. I just need more seat time.”

Caruso will head to the third race of the 2022 season tied in eighth place points with veteran Bo Butner.