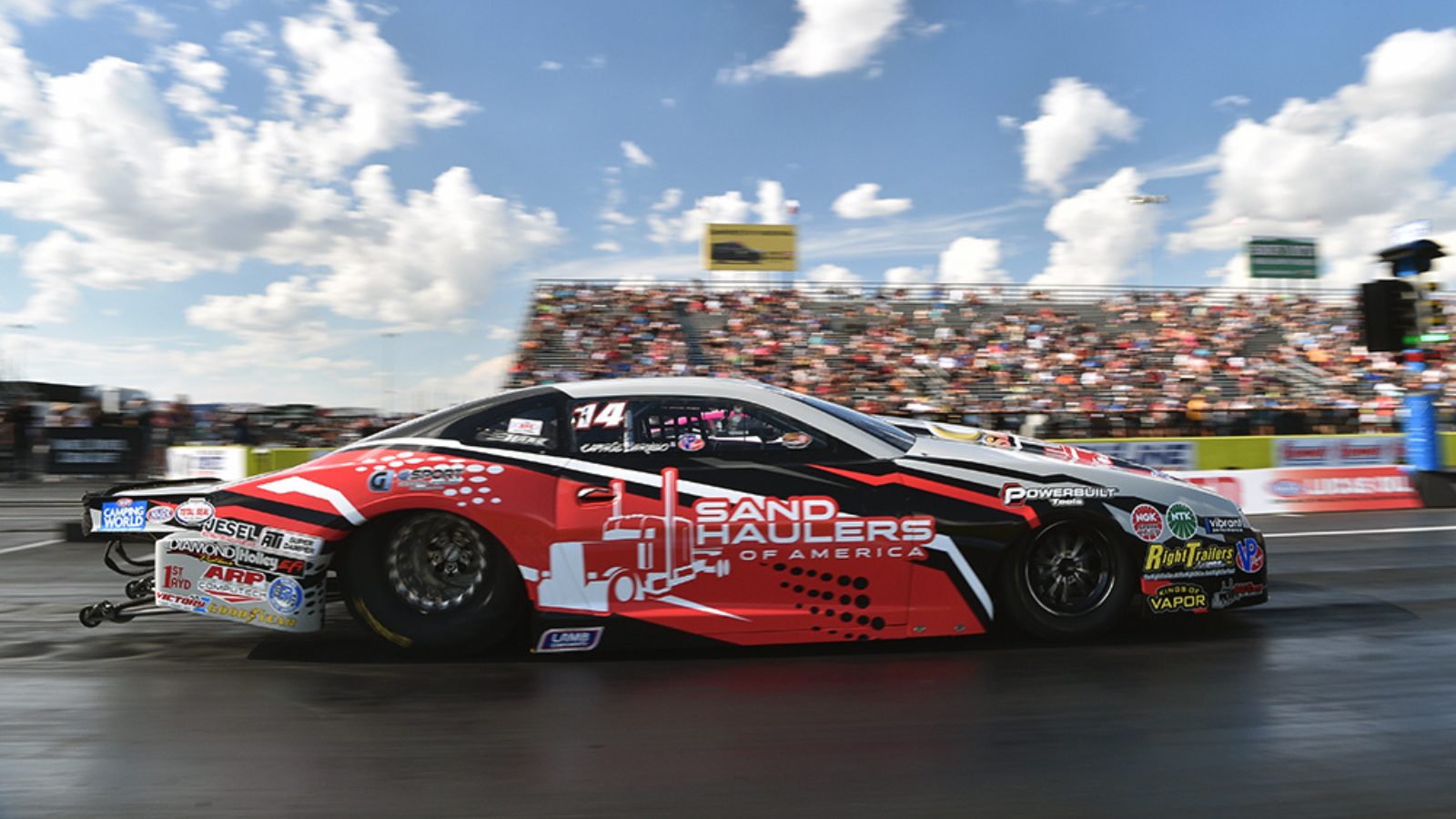 First year Pro Stock driver Camrie Caruso, the front-runner for NHRA rookie of the year, took in as much of the Stampede of Speed in advance of the Texas NHRA Fall Nationals as she could. On Thursday night Caruso joined 50 other NHRA drivers and riders at the Pre-Stage FanFest for the free autograph session the day after she joined her crew chief Jim Yates, two-time Fall Nationals winner, at the inaugural Champions Dinner recognizing former Texas Fall Nationals champions. Friday through two qualifying sessions Caruso and her Titan Racing Engines powered Camaro were in the mix of a quick Pro Stock class racing under the lights for $7,500 during the second session. Racing the Sand Haulers of America Camaro with backing from OZ Saferooms, the former junior dragster and Top Alcohol Dragster race was ready for her second race in the Lone Star State. The Saturday qualifying sessions initially presented race day conditions, but a cool front rolled into north Texas and made race day a roll of the dice of all the Pro Stock teams. As the No. 9 qualifier Caruso gave up lane choice to No. 8 qualifier Matt Hartford.

For the second week in a row Caruso faced Hartford in the first round. The Sand Haulers of America Chevrolet Camaro was looking to reverse the results from two weeks ago in St. Louis at the Midwest Nationals. Unfortunately, the results were the same and Caruso had to endure another learning experience as she develops in the toughest category in the Camping World Drag Racing Series.

As Caruso was rolling into stage a surprising clutch malfunction caught the rookie driver off guard and she jumped the Christmas Tree resulting in an automatic disqualification. Luckily, Caruso was able to hold onto her position in the Top Ten with two races remaining the season.

“When I pushed in the clutch it came back and it took me by surprise. There was too much tension for me to hold it in and I left early. I would say it was half mechanical and half driver on that one,” said Caruso. “Now that I know that can happen, I think I will be better prepared in the future. I have two more races to get that first win and I can’t wait to get to Las Vegas. That is one of my favorite cities and I like that track.”

This season Caruso raced to a final round as the No. 1 qualifier and started from the top half of the field in nearly half of the races. She has qualified at every NHRA national event, a major accomplishment for a new team. Heading into the final two Countdown races while the championship might be out of reach, a top five finish would be a strong performance by one of the rising stars of the NHRA.

Caruso and the rest of the Pro Stock class will be back on track in two weeks at The Strip at Las Vegas Motor Speedway.