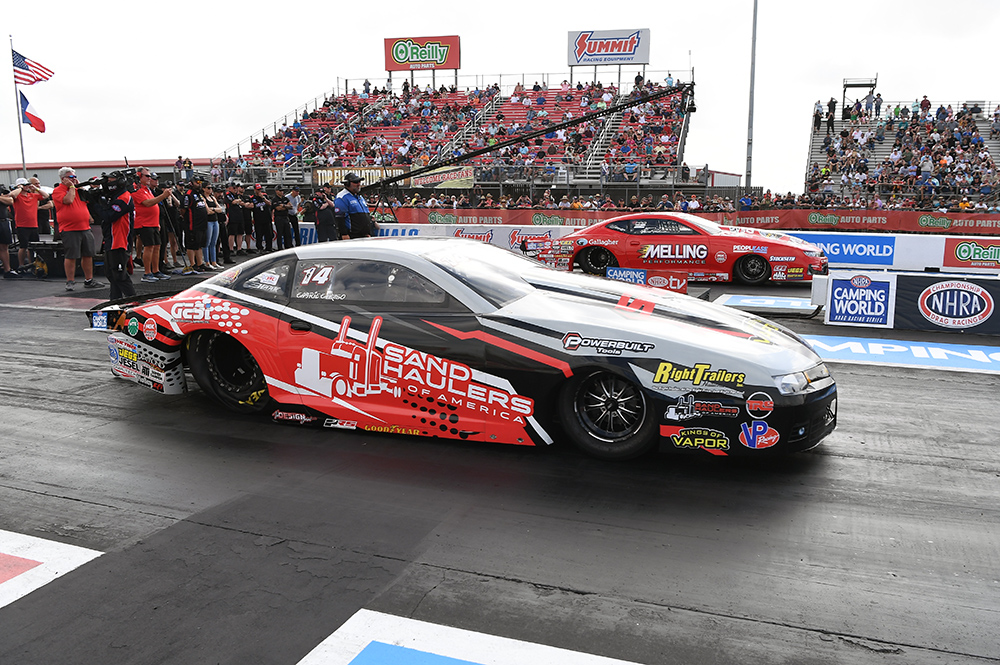 In just five races rookie Pro Stock driver Camrie Caruso has stamped her name into the NHRA record books at the final installment of the NHRA SpringNationals. Racing the Sand Haulers of America Chevrolet Camaro, Caruso earned her first No. 1 qualifier faster than any other Pro Stock competitor in the modern era, tied with 2021 Rookie of the Year Dallas Glenn.

She doubled down with more history racing to a final round match-up with four-time world champion Erica Enders and becoming part of the first pair of female Pro Stock racers to face each other in an elimination round. Her effort this weekend moved the young driver from Denver, North Carolina, up from 11th to 7th place in the Pro Stock point standings.

“First round was nerve wracking because we hadn’t made a representative pass in a few races,” said Caruso. “We got past the first round and then made it past the second round. We just took it round by round. Unfortunately, the final round didn’t go as planned. I am confident in my car every run. My guys do whatever they can to give me the best race car. We are doing everything we can to go down the track every run and I am working on getting better.”

In the first round Caruso as the No. 1 qualifier was able to select when she and her Sand Haulers of America Chevrolet Camaro made their pass. Her team elected to let all her competitors make runs and she faced off with veteran Fernando Cuarda as the last pair of Pro Stock cars. Caruso picked up her third first round victory of the season when Cuarda jumped the tree red-lighting, as Caruso cruised to the quarterfinals with a 6.609 second run at 209.17 mph. The run was right in the ballpark of her final qualifying pass.

In the quarterfinals Caruso faced veteran and former Pro Stock world champion Bo Butner for the first time in her young career. In a great race off the starting line Caruso was able to pull away from Butner who overpowered the track and crossed the centerline behind the rookie driver. Her winning time of 6.624 seconds at 208.81 mph was another consistent run with her Titan Racing Engine power. Before the quarterfinal pass Caruso’s team had their hands full in the pits as they had several adjustments to make before the run.

“I just trusted my guys and my race car,” said Caruso, from the top end after her first second round victory. “I have to thank Sand Haulers of America, GESi, Powerbuilt Tools and my guys are amazing. Coming this far with the team we assembled 60 days before the season started has been great to see how everyone has progressed. I am super thankful for this opportunity.”

Racing in her first semifinal round Caruso had to face five-time world champion Greg Anderson for the first time. Giving up lane choice Caruso had to dig deep to give her team every advantage to reach their first final round. The Rookie of the Year front-runner delivered with a nearly psychic reaction time of .011 to get her Camaro out in front and hold on for the hole shot victory. Caruso’s winning time of 6.607 seconds combined with her reaction time was enough to get her to the finish line stripe in front of the 99-time Pro Stock national event winner’s 6.568 second pass.

“I just tried to keep calm,” said Caruso when she looked back at that significant round. “Greg is an amazing racer and has a lot of accomplishments. He has earned every accomplishment. I just went up there to try and get the win.”

From the starting line Caruso’s crew chief Jim Yates was all smiles as his young driver advanced to her first final.

“How about Camrie Caruso?” exclaimed Yates, a two-time Pro Stock world champion. “She was .011 against the world champion and we are going into the final! I am incredibly proud to be a part of this team and to be involved with that young lady.”

The final round was a clash between the No.1 and No. 2 qualifiers and the third time the pair ran side by side over the weekend. As the Sand Hauler of America Chevrolet Camaro rolled through the water box Caruso attempted to execute one of her textbook burnouts but her race car did not rotate the tires when she hit the throttle. The team attempted to redo the burnout unsuccessfully, but Caruso staged and then dropped the hammer on the four-time world champion with a reaction time advantage .030 to Enders’ .053. As they closed in on the finish line Enders got the nose of her Camaro out in front for the win.

“I knew what happened on the burnout but I wasn’t sure it the car was going to take off down the track afterwards. We were just hoping for the best at that point. I was a little nervous, but I just focused on what I needed to do. Nothing has changed because we had a good weekend here. Nothing is a given out here.”