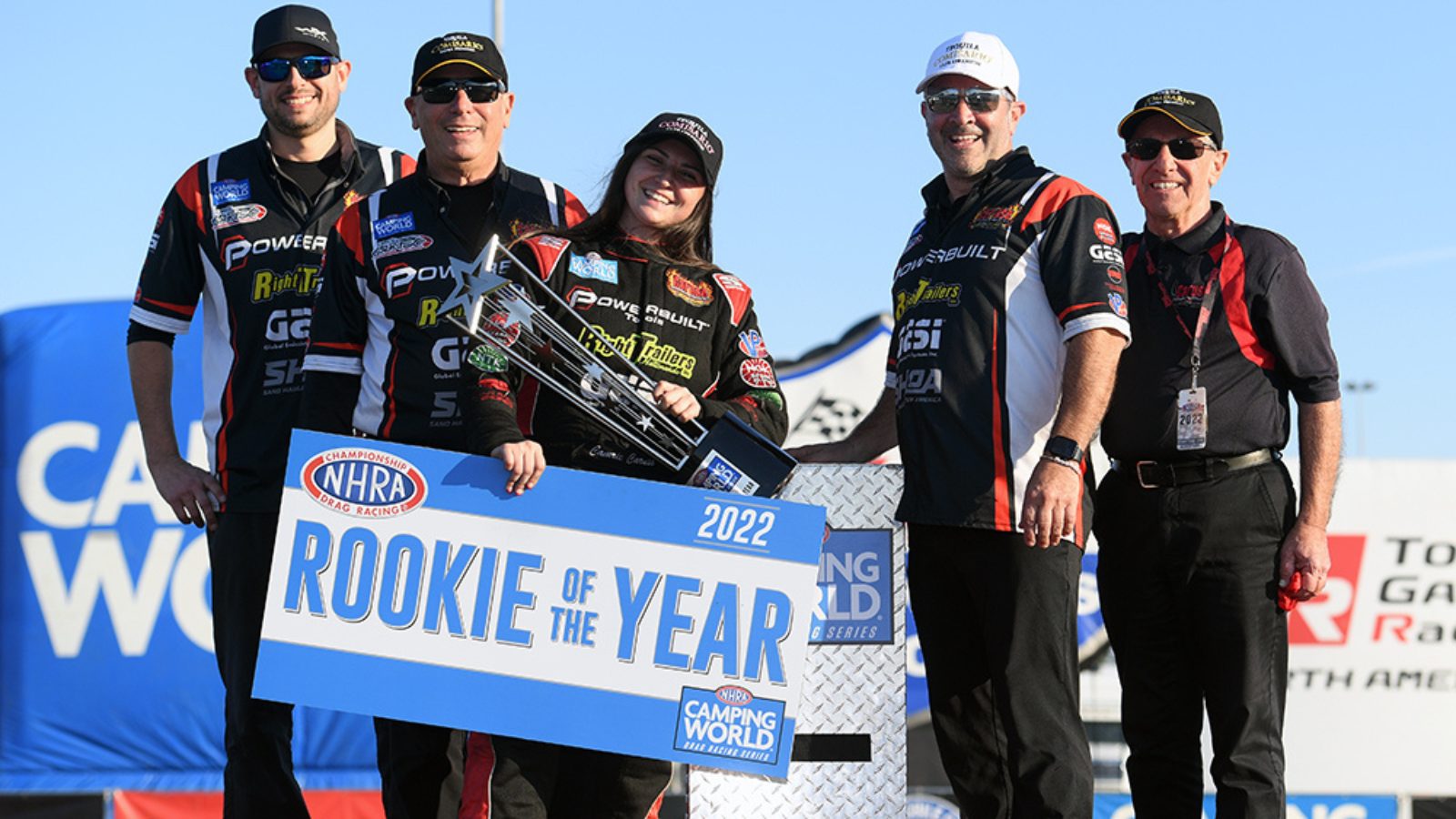 After nineteen races from coast-to-coast NHRA Pro Stock driver Camrie Caruso wrapped up a strong rookie season by qualifying for the 57th Auto Club Finals this weekend at Auto Club Raceway at Pomona. The driver who resides in Denver, North Carolina, has been pursuing her dream of racing in one of the toughest professional categories in the NHRA Camping World Drag Racing Series. Through two days of qualifying Caruso made consistent runs and rolled into race day as the No. 13 qualifier. The 24-year-old qualified for every national event this season and in the first round the Powerbuilt Tools Chevrolet Camaro pulled up beside Aaron Stanfield.

For the fourth time this season Caruso was racing one of the toughest competitors in the class. Earlier this season she got a win light against Stanfield at the U.S. Nationals, but the first-year driver was not able to recapture that magic today at Pomona. Knowing she was at a slight performance disadvantage, Caruso knew she had a shot to make up an elapsed time deficit with a strong reaction time. In the back half of the season Caruso had made strides of improvement but today she was .002 seconds early against Stanfield, lighting the red-light for disqualification. Her scoreboard lit up with a 6.556 second, 210.31 mph beside Stanfield’s 6.552 second, 209.33 mph run but it was a moot point with the early start. It was her quickest run of the weekend in a losing effort.

“I knew I needed to be aggressive on the starting line and I almost had a perfect reaction time. Aaron is a great competitor and I am proud of how my team pulled together this weekend,” said Caruso. “This race has been amazing even though we didn’t get the win. I made my first professional start here in February and it seems like that was yesterday. The season has flown by and we will take the off-season to get even better. We have a lot of things in the works and I am excited to get my second season started as soon as possible.

At the conclusion of qualifying yesterday Caruso was recognized at the top end of the race track as the 2022 NHRA Rookie of the Year. She opened the season qualifying No. 7 at the historic Winternationals at Auto Club Raceway at Pomona and the very next event she qualified No. 8 at the Arizona Nationals and won her first round of eliminations, advancing to the quarterfinals following a win light in the first round over Cristian Cuadra. Over the next six races Caruso qualified in the top half of the field five more times including a No. 1 qualifier at the SpringNationals at Houston Raceway Park. The first-year driver also advanced to her first final round at that event defeating Fernando Cuadra, Bo Butner and five-time champion Greg Anderson before losing a close final round to five-time and newly crowned 2022 Pro Stock champion Erica Enders in the first all-female Pro Stock final round.

“We qualified for every race and our highlight was the race in Houston when we were No. 1 qualifier and raced to the final round,” said Caruso. “Every race this season I feel like we got better and I am excited to get back on track next season. We will have a lot of exciting announcements over the off-season and I want to thank Tequila Comisario, Powerbuilt Tools, Right Trailers, Sand Haulers of America and everyone that has supported us this season.”

Over the back half of the season Caruso continued to develop, improving her reaction time while her young team battled to stay in the Top Ten. They qualified for the NHRA Countdown to the Championship as the No. 8 seed.