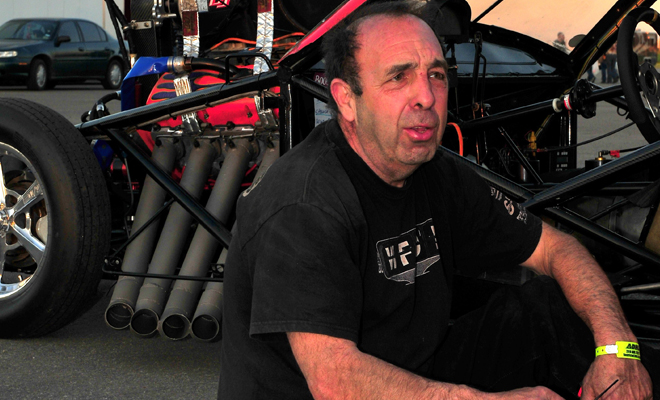 On Tuesday, November 5th, 2013, Arthur Camp Stanley III, lovingly known simply as Camp, went to Las Vegas intending to do everything within his power to see that his son, John, would have at least one five-second time slip to his credit. He had no delusions or preconceived notions that such a feat would come easily—or even happen—but knew that it surely couldn’t if they didn’t try, so he set off from his home in Hagerstown, Maryland, on a 2,478-mile quest across the country with the family’s orange “Appalachia on Steroids” 1969 Camaro in tow.

“We’d been working on him for over a month,” said Mel Roth, promoter of the Street Car Supernationals, an event that’s come to be known as the ultimate proving ground for doorslammer racers. “A bunch of guys out on the West Coast wanted to see John and Camp, some ADRL Pro Extreme regulars, come out and play ball on the quarter-mile.”

Nevertheless, as Camp openly admits, it wasn’t a lack of desire or an unwillingness to spend 37 hours behind the wheel over the course of a week on the road that made the final decision to head west so difficult. “As bad as we wanted to go, we were staring a $4,000 diesel fuel bill right in the face,” he admits. “And that’s before we booked flights for John and the rest of the crew, since they couldn’t miss a week of work driving.”

Finding a way, however, is something that seems to come naturally to Stanley, a storied pioneer of outlaw doorslammer drag racing who was responsible in 1988 at Atco Raceway for tuning Tommy Howes to the world’s first six-second, 200-mph doorslammer pass.

Also browbeating Camp and company to participate in the no-holds-barred Vegas shootout, perhaps more than any other, was fellow outlaw Pro Mod racer Dan Myer, who ultimately offered the most convincing argument. “He offered to pitch in on fuel,” says Camp. “We’re good friends; he’d been on me forever to come and when he threw down the gauntlet with some help on fuel, I thought, ‘By God, we might just be able to pull this off.’ I made a few more calls, leaned a little bit on our good sponsor Fuel Dynamics, and the next thing I know I’m loading up this hot rod, putting the tailgate down on this ol’ rig and hittin’ the road.”

Considering the task that simply getting out of the driveway proved to be, even the ever-optimistic Camp Stanley was a little unsure of what to expect when he actually reached his final destination a few short miles outside the city and well away from the hustle, bustle and bright lights of the Las Vegas Strip.