When it comes to the historic Big Dog Shootout at North Carolina’s Piedmont Dragway, the most improved car and driver combination has to be the beautiful blue Camaro of driver Cam Clark and owner Charles Harris. This was evident as the humidity of the June air kept all competitors in the 4-second range as qualifying concluded for the June running of the Big Dog Shootout. This month’s presenting sponsor was LRS Racing Components and the event did not disappoint with 11 cars on the property and 10 taking a time to qualify for the elite 8-car field.

Qualifying No. 1 was Clark at a 4.05 followed by last month’s winner, Brian Shrader, second at a 4.062. Third was Jason Harris at a 4.087 in his Corvette, with April winner Tim Lawrence fourth at 4.099. Five through eight were Danny Perry at 4.115, Justin Wall at 4.170, Jayme Thompson at 4.31 and Travis Harvey at 4.406. Unable to make the field were Shannon Wilson and Bubba Turner. Thompson and Harvey were working through new-car gremlins and Turner was just overcome with impossible gremlins. Rest assured that all of these cars, and some others not yet completed, will make the 2018 season one to remember.

Eliminations began with Lawrence taking out Perry with a 4.06 to another 4.11 for Perry. Next up was Justin Wall putting a 4.16 on the board and defeating Jason Harris’ 4.21. Shrader won on a single when Jayme Thompson could not make the call. The last pair of first round saw Cam Clark run a 4.06 over alternate Shannon Wilson. 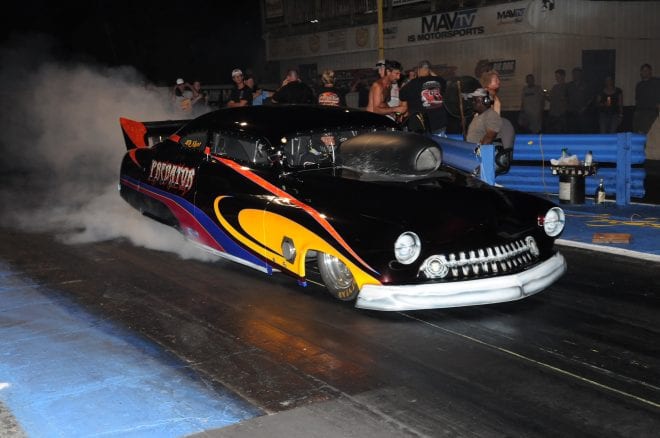 The semis did not disappoint with Clark taking a close one over Lawrence and Shrader using a 4.01 at 181 to defeat Wall. At this time, Mother Nature took over, and with curfew looming on the horizon, competitors and staff agreed to the following: the pot was divided between Shrader and Clark with the trophy to be awarded during the second round of qualifying for the July edition, so make plans to be there.

Other eliminators were divided up also with Leon Pegram the low qualifier in Rico’s Real Street and Ray Anderson low in the 6.00 eliminator.

With several new cars still not finished and Brett Nesbitt absent this month, the July edition promises to be the most competitive of the year. Again, this will be held on the third Thursday of the month and if you are a fan of fast doorslammer racing, you need to be there to be witness to the 21st season of the Big Dog Shootout. See you there.