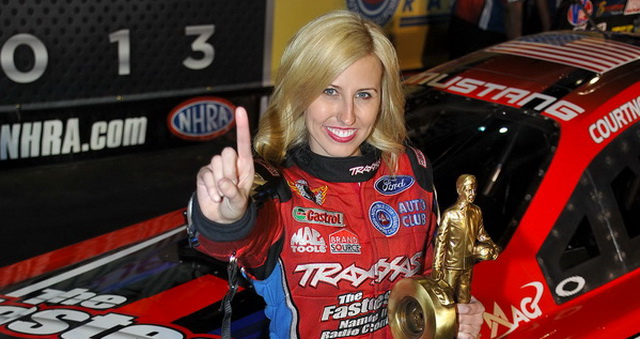 Courtney Force, the 24-year-old driver of the Traxxas Ford Mustang Funny Car and current points leader in the NHRA Mello Yello Drag Racing series, is gearing up to take on a new set of challenges at the 29th annual NHRA Arizona Nationals, Feb. 22-24, at Firebird International Raceway, near Phoenix.

Force has had an exceptional start to the 2013 season, getting No. 1 qualifier, picking up bonus points and taking the win at the O’Reilly NHRA Winternationals just a few days ago in Pomona, California.

“I was more nervous going into Pomona this year than I was last year. When we went to that No. 1 spot on Saturday I started feeling a little more comfortable. I’m so lucky to have a great group of guys on my team and to have Ron Douglas tuning my race car. He knows how to keep this car running consistently. 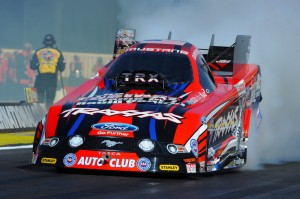 “I was so nervous going into race day on Sunday and it was surreal to think back to just a year ago when I was making my Funny Car debut. It was really exciting getting that win in just the first race of the season,” said Force.

Force currently holds a 30-point lead over Winternationals runner-up, Capps, in the No. 2 spot.

“It’s definitely a big boost of confidence coming off of a win at the first race and going into Phoenix in the points lead. We definitely hope to keep this momentum going, but I know that everyone is going to be coming after me this weekend,” said Force.

Last year in Phoenix, Force qualified in the No. 12 spot before beating her father John Force in their first ever side by-side-race. She went on to take out fellow rookie Todd Lesenko before losing to her brother-in-law, Robert Hight, who went on to win the event for the John Force Racing stable.

“It was a huge accomplishment matching up against my dad last year in the first round and turning on that win light. I think it throws my dad off of his game a little when he has to race his kid, which is better for me! We had a good race car last year and again this season, but racing someone like my dad, a 15-time champion, and getting the win was so exciting. I’ve grown up watching him race, but he has also taught me everything I know about driving. In that round a year ago, we were messing with each other a little bit and it must have worked in my favor because I was able to grab the win. I’ll never forget that day.

“I’m looking forward to seeing how our car will run at this race. Even though we’re coming off a win in Pomona, I know it starts all over this weekend. Coming out to Firebird I just hope to get our car qualified and go some rounds and we will definitely are going to try and go after another win for this Traxxas Ford Mustang team,” said Force.