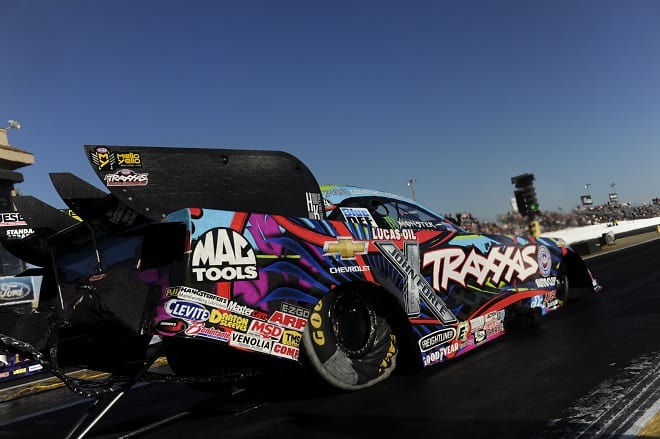 Courtney Force raced to the qualifying lead in Funny Car Friday with a track record performance at the CARQUEST Auto Parts NHRA Nationals.

Force, who is looking to redeem last season’s finish with a strong early season start, led the Funny Car field with a track record time of 3.930 seconds at 323.97 mph in her Traxxas Chevrolet Camaro.

“It’s definitely what we hoped for,” said Force who carried over her momentum from pre-season testing at Wild Horse just a few weeks ago. “Once we got the car figured out we were running pretty consistent in the threes so I was excited to come back to this track. We felt comfortable here and we made good runs.

“I just love getting (the car) down to the other end of the race track and it definitely feels good from a driver’s standpoint. I definitely think it’s getting my team motivated so we’ll see what we can do with it.” 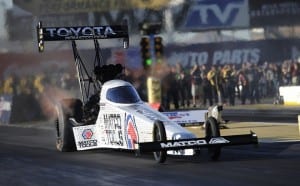 After not qualifying where they hoped at the Winternatioanls, Brown and his team looked to get back to their championship standards this weekend.

“It felt pretty good to sneak out with that second round run,” said Brown, whose machine lost traction on his first qualifying attempt. “We thought that someone would run better than our (3.76) because we were the first pair down the race track.”

“You can’t sleep on any of these cars out here because they’ll take your lunch,” said Brown acknowledging Kalitta and Tony Schumacher’s presence close behind, “We’ve just got to keep putting that work in.”

Butner was quickest in Pro Stock, clocking a 6.618 at 208.88 in his Jim Butner Auto Sales Camaro that held up through two rounds, holding off Greg Anderson by 0.06 seconds. He was also the top qualifier after Friday at the Winternationals in Pomona.

“Just like last race, I don’t think we’ll hold up [Saturday],” Butner said. “I’ve got a couple guys with me that are pretty

mean and they know what they’re doing, it’s our whole team. We just want to be one two and three and however we end up is great.”

Since the season opener Butner and his team have taken the time to really work on the car and he hopes to secure his first career No. 1 qualifying position in only his 19th Pro Stock start.