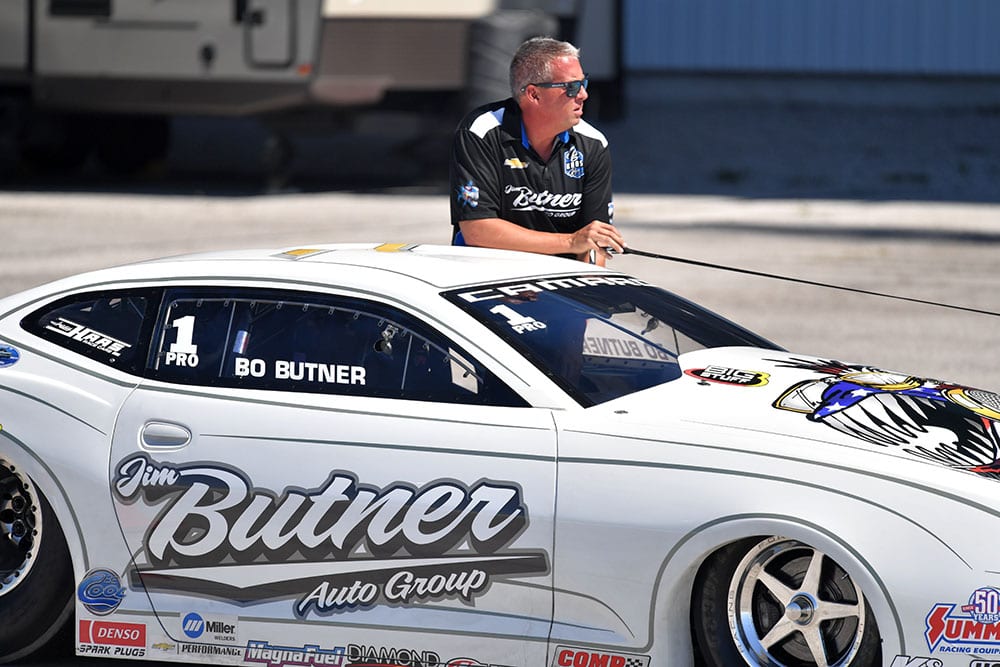 Reigning NHRA Pro Stock champion Bo Butner made his professional debut in the factory hot rod class in 2015, and the NHRA Toyota Nationals at The Strip at Las Vegas Motor Speedway will be the 88th Pro Stock race of his career. There in Vegas, Butner has had a fair share of success – including a double-up victory in Comp and Stock Eliminator in 2012 and his first Pro Stock final round in 2015. As the 2018 season of NHRA’s Mello Yello Drag Racing Series comes to close, it is only fitting for Butner to announce his future drag racing plans at a facility that has held such significance for him for so long.

After the 2018 NHRA Finals at Auto Club Raceway Pomona in two weeks, Butner will shift gears. Rather than race Pro Stock in 2019, the longtime Sportsman racer, multi-time division champion, and Competition Eliminator world champ will return to his roots. Butner has committed to race the full schedule of the SAM Tech Factory Stock Showdown in a Cobra Jet Mustang. The exciting shootout series is a heads-up competition between factory-built Chevrolet COPO Camaros, Dodge Challenger Drag Paks, and Cobra Jets. The series awards points, national event wins, and a championship.

“I’m still feeling the ‘wow factor’ after winning a Pro Stock championship; I’m still living in that,” said Butner. “I’m a Sportsman racer, and after working your way up the ranks and racing in every class in the world, it’s really awesome to hit your goal. That’s one of the key reasons I’m ready for something else. We achieved the goal. What’s next?”

The driver who has attained 21 total national event wins across five categories may also venture into the world of Pro Mod after licensing earlier this season in Harry Hruska’s turbocharged Camaro. He intends to try his hand in the world of no prep drag racing as well with the very same Chevrolet Cobalt that he won the Comp Eliminator championship with in 2006.

“My no prep car is being put together as we speak, and I’m going to try that and see if I like it,” said Butner. “There are a whole lot of options now, and I won’t have to race – I can race when I want to race. I’m probably stepping away from Pro Stock for at least a year because I have a lot of life-changing things happening: I’m going to be a grandpa in April, and I’ve put off a lot of family stuff for the last four seasons. I want to get back to that, plus, our business is growing and I need to be there for that.”

The open-ended comment calls to mind the question of when and where Butner might return to Pro Stock, the ultra-competitive category in which races are won and lost by mere thousandths of a second, and victory is determined just as much by horsepower, engine and chassis set-up as it is by the skill of a driver at the starting line and at each increment down the quarter-mile drag strip.

“If I come back to Pro Stock, it will only be with KB Racing, no other team,” said Butner. “I couldn’t be paid to go race somewhere else. I’m loyal to these guys because they’ve been very loyal to me, especially the team owners Ken and Judy Black. When I discussed this with them, they told me that I’d always have a home here. That makes me feel really good.”

During his time with KB Racing and with two races remaining to add to his stats, Butner has so far accumulated six wins in 19 final rounds. He has been No. 1 qualifier eight times.

“I don’t want to hurt Pro Stock, and I hope it grows even bigger,” said Butner. “And I want everyone to know that I’m not going away. I’m amazed by the support that we’ve had and the following that has grown. It’s unlike anything I’m used to, but it’s great. These are the best fans in the world. Pro Stock is a Stock and Super Stock Sportsman racer’s dream. It’s the ultimate class to race and absolutely the toughest to turn on a win light. Day one, Jason [Line] told me that, and I thought, ‘no, I got this.’ But he was 100% correct. It’s hard to win, and you feel great just to win a round.”

Butner was humbled throughout his time in Pro Stock and overwhelmed by the support across the country but also right at home.

“I want to thank my fiancé, Randi Lyn Shipp, and everyone who has worked on our crew and been there for us through thick and thin. Darrel Herron, Greg Esarey, Davey Allison, Scott Waterhouse, Tyler Hogan, Cody Anderson, and of course Jack Line. Every guy or girl who has helped us, thank you, and that includes Greg [Anderson], Jason [Line], and all the guys who are part of the KB Racing team. To Ken and Judy Black who took me in like a son, thank you.

“I have to thank my employees at Jim Butner Auto Group – they’re all my family and friends – for putting up with the lack of inventory at times and really sticking by me. They root for me, and they made it possible for me to go Pro Stock racing. I’m excited to get back with them and get more involved. Our customers have been great, so supportive and always ready to tell me when I need to hit the Tree better. It’s fun and it’s been pretty neat. Who else has a Pro Stock championship trophy in their lobby on a big pedestal that lights up? People come in and take pictures with it, and that’s been a lot of fun for us. I have to say, this sport is a lot bigger than I ever realized. I’m proud to be part of it.”