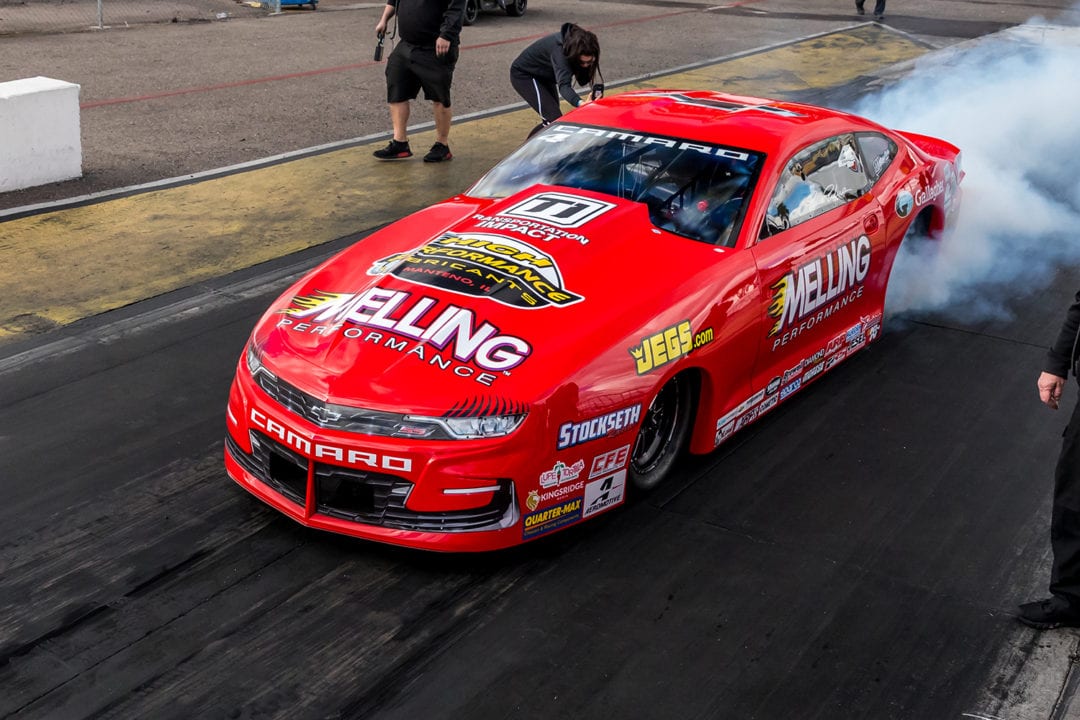 Equipped with a new car and an ultra-productive off-season, Erica Enders is thinking big heading into the 2019 NHRA Pro Stock season, which begins at this weekend’s Lucas Oil NHRA Winternationals at Auto Club Raceway at Pomona.

She’ll debut a new Elite Motorsports/Melling Performance Chevrolet Camaro from RJ Race Cars at the race, adding to an excitement level that is apparent after an off-season full of activity.

“It was probably one of the most productive off-seasons we’ve had,” Enders said. “We added another Pro Stock team with Rodger (Brogdon). We made the best of the time we were testing and we’re getting our feet wet with this new chassis right off the bat. Rick and Rickie Jones do an amazing job and we’re really pleased with the car we have.”

Enders is confident the car can perform at a high level to open the season as she takes on a full field in Pomona. With the contingent of talent among the Elite Motorsports team, she’s also not worried about any potential bumps in the road that usually come with a new car.

The right people seem to be in the right places when it comes to getting results and Enders, who has 23 career wins in 46 final-round appearances, believes that will bring out the best in everyone in 2019.

“We have an awesome brain trust, that’s for sure,” Enders said. “We’ve added Justin Elkes (of Modern Racing) and we have a lot of people who have been around the block and know what they’re doing. The amount of work we do is substantial and the guys work so hard at the shop. It can be stressful and a lot of pressure, but we all do the best we can and I have utmost confidence in them.”

Despite the reduction to an 18-race Pro Stock schedule in 2019, Enders will be busier than ever as she tackles a full NHRA Pro Mod season for the first time as well. Teammate Alex Laughlin will join her in that tremendous undertaking, while five-time world champ Jeg Coughlin Jr. and Rodger Brogdon give the team impressive talent and depth on the Pro Stock side.

Double-duty won’t start until Gainesville, but Enders has the opportunity to get off to a strong start in Pro Stock at Pomona. With only 12 races before the Countdown to the Championship begins, a quick start is imperative and Enders is determined to rack up wins a year after she went to seven final rounds but only took home one Wally.

“We didn’t have a terrible year, but the little things didn’t go our way,” said Enders, who finished fourth in Pro Stock points in 2018. “We definitely had some great success at Elite, but competing for a championship and winning more races is our goal. We certainly have all the pieces to do so and this is the most prepared we’ve been in the five years I’ve been racing with (team owner) Richard (Freeman).”

Enders has one career win at Pomona, and it remains one of the most memorable in her career as it clinched her first world championship in 2014.

But she’s still seeking her first Winternationals victory at a track she has always held in high regard, something she hopes to accomplish this weekend.

“I enjoy going there, just with the amount of history the track has and the memories we’ve had there,” Enders said. “The Jr. Dragster from 1992 is in the museum, and my sister and I always pay a visit, so it’s a meaningful race to me.”