When Griffin Steinfeld jumped into action as a stunt driver on the set of the 2018 film Bumblebee, he set into motion a chain of events that will see him make his Radial vs. the World debut at Lights Out 13 this weekend driving the Miller family’s twin-turbocharged “Bumblebee” Camaro. It’s Steinfeld’s latest move in a racing career that includes off-road trucks and circle track racing in the NASCAR Whelen Series and NASCAR K&N Pro Series West.

Steinfeld was on the set with his younger sister, Hailee Steinfeld, who stars in the Transformers franchise movie, when the director called on him to jump in the “Bumblebee” Volkswagen Beetle for a time-sensitive, crucial scene. Steinfeld aced the impromptu opportunity and became an official stunt driver for the film.

When Bumblebee came out in theaters, Steinfeld started getting social media messages about a Bumblebee-themed race car that was on display at a movie theater in South Carolina. It was Jeff Miller’s screw-blown Bumblebee Camaro, and they showed up simply to support the opening and spread the word about drag racing. It immediately caught Steinfeld’s attention.

“I was like ‘Damn, that’s a real-deal race car,’” Steinfeld remembers. “I linked up with Patrick Miller and started talking with them. I was like, it’s super cool that you did that to support the movie, hopefully we cross paths someday. Well, I went out to one of the No Mercy races a few years ago just to spectate and hang out. Sure enough, the car was there. I walked up to the team and introduced myself. That’s how that started a few years ago, and here I am this weekend coming out in the RVW twin-turbo car for Bumblebee.” 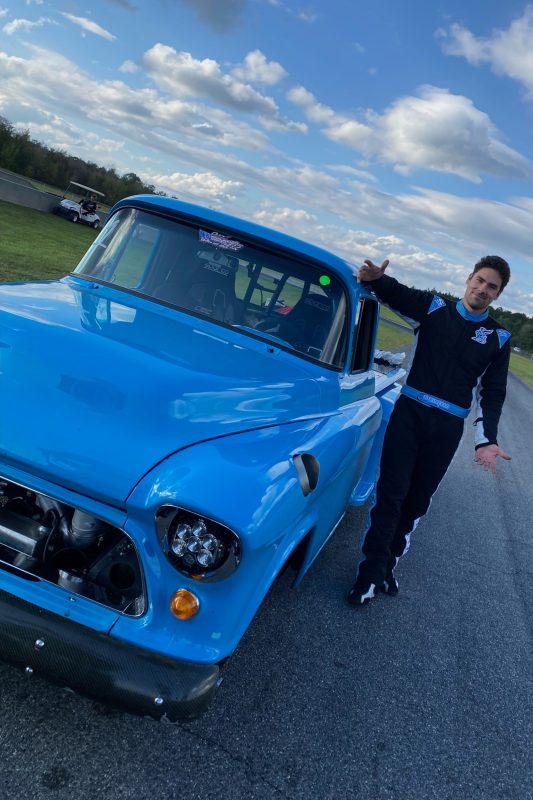 Steinfeld and his ’56 Chevy truck at No Mercy 12

Steinfeld made his first passes in the car last fall during a test session at Carolina Dragway. The plan was merely to get him up to speed in the car, as it was quite a step up from his twin-turbo ’56 Chevy truck that’s been as quick as 4.60s at 167 MPH in the eighth mile.

“The first run I just wanted to go 200 feet or whatever just to get my feet wet with letting go of the button and doing that program inside the car,” Steinfeld says. “It’s totally different than my truck and any other car I’ve been in, with a Liberty and that style transmission.”

While he didn’t get to make a full pass, he did get a learning experience that has him ready to get back in the car.

“I was a little bummed out to be honest right when it happened because I wanted to make a full pass,” Steinfeld admits. “I’ve never been 200 mph and I wanted to go 200 mph that day, but after calming down and understanding what had happened, I realized that had taught me way more than the car just making a clean A-to-B pass.

“All in all, I have three hits in the car,” he continues. “I would like to say I’m comfortable in it because I know what it feels like when the car does get out of line. The butterflies are already turning, but I think I’m prepared to do it.”

When it comes to making his Radial vs. the World debut at Lights Out 13 this weekend, Steinfeld’s goals are simple.

“Go fast, don’t suck,” he laughs. “I really want to go rounds. I put myself under a ton of pressure. But at the end of the day, A: I want to stay safe and keep the car in one piece, and B: I want to go rounds, go to the finals and win the thing. That’s what we’re going out there to do. We don’t go out there to just make a couple passes and go home. We want to win this thing.”

Steinfeld’s schedule beyond this weekend will depend on funding. He also has a desire to race in the NHRA world, including Pro Mod, or maybe even Top Alcohol Dragster or Top Fuel. He recently had the opportunity to warm up Antron Brown’s Matco Tools Top Fuel dragster at the Lucas Oil NHRA Winternationals, and he’s eager to do much more than just sit in the seat for a warmup.

“Good things have been happening with myself and NHRA,” Steinfeld says. “I really hope to be in a rail soon, whether it’s Top Alcohol or Top Fuel or anything like that. I just want to stay on their radar and keep doing good things. Racing in RVW for the first time this weekend is a good stepping stone in teaching my brain and my body what to do at those speeds and what it feels like.”