Antron Brown raced to his third victory of the season and earned his first ever Top Fuel win at his home track, Old Bridge Township Raceway Park, Sunday at the Toyota NHRA Summernationals.

Brown, a local favorite as a native of nearby Chesterfield, powered his Matco Tools dragster to the winner’s circle with a performance of 3.843 seconds at 318.47 mph, also claiming a milestone 50th NHRA victory in the process. Brown has 34 wins in Top Fuel and he earned 16 victories in Pro Stock Motorcycle competition from 1998-2007.

The 2012 Top Fuel world champion and current series points leader raced past Brittany Force’s Monster Energy dragster, which lost traction early in the run and finished in 5.398 at 150.16 in her fifth career final round appearance. As the No. 1 qualifier, Brown defeated Jenna Haddock, Doug Kalitta and Dave Connolly in earlier rounds.

“We knew (my 50th win) was at stake when we came in here, but I put everything of what this race means to the side, and that’s what our team did,” Brown said. “We came in here and treated it like a race. Every race we come in, we put in all the hard work and put in our all. We had to remind ourselves that each and every round. To do it in the hometown and in front of family means the world to me.”

Since the beginning of the 2009 season, Brown has earned 32 victories, which is 10 more than his closest Top Fuel competitor and teammate, Tony Schumacher.

Force raced to her first final round appearance of the season by defeating recent Topeka winner Richie Crampton, defending world champ Schumacher and Terry McMillen in earlier rounds. She was the No. 6 qualifier.

In Funny Car, Hagan’s final-round effort of 4.132 at 299.53 in his Mopar Express Lane/Rocky Boots Dodge Charger R/T was enough to hold off Alexis DeJoria’s Patron XO Café Incendio Toyota Camry at the finish line and earn his third victory of the season.

“It’s nice to be able to go out here and run so strong and defend the title that we won last year,” Hagan said. “Everything started clicking here this weekend. (Crew chief) Dickie (Venables) put a great car underneath me. We were able to beat a lot of tough, tough race cars out there and really good drivers. It just gets tougher and tougher each weekend.”

Hagan, the defending world champion, has 17 career wins, two at Raceway Park and now leads the series standings. The No. 4 qualifier raced past 16-time world champion John Force, Tommy Johnson Jr. and teammate Ron Capps to make it to his third final round appearance of the season.

Anderson powered his Summit Racing Equipment Chevy Camaro to a 6.504 at 214.31 mph to earn his 76th career victory and take over the Pro Stock points lead. He sprinted past Allen Johnson in the final round to earn his second win of the season and a category record sixth trophy at Raceway Park. 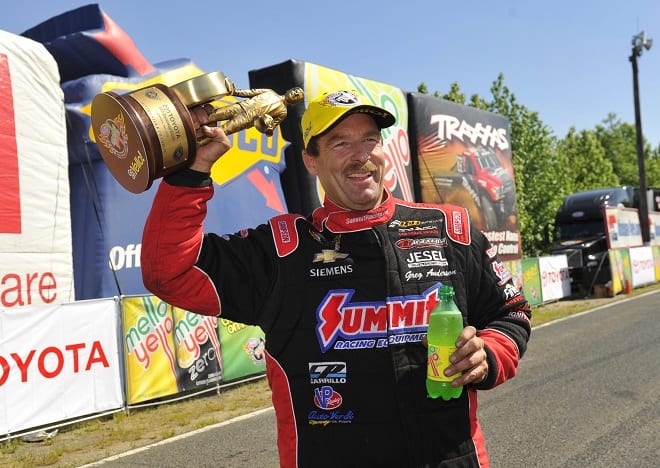 “I had a great weekend,” Anderson said. “When I got here, the car ran great right off the trailer. I made eight runs in a row. It was awesome. We got the victory. It’s been a while. It’s good to be back. It’s a neat feeling to have a racecar that can win a race if you just pilot it down the race track and don’t do anything wrong. That’s all a driver can ask for.”

As the No. 1 qualifier, Anderson powered past Val Smeland, newcomer Bo Butner and V. Gaines to make it to his eighth career final round appearance at Raceway Park. Anderson has two victories and three runner-up finishes so far this season.

Johnson, still looking for his first victory of 2015, pushed his Magneti Marelli/Team Mopar Dodge Dart past Larry Morgan, Alan Prusiensky and Shane Gray before meeting Anderson in the finals. This was his third career final round appearance at this event.

Louisiana alligator farmer Savoie earned his second career Pro Stock Motorcycle victory when second-time finalist Jim Underdahl turned on the red-light in the final round. Savoie rode his Savoie’s Alligator Farm Suzuki to a 6.794 at 197.71, earning his first Wally since St. Louis 2014.

Savoie advanced to his sixth career final by racing past Joe DeSantis, series points leader and local favorite Eddie Krawiec and Hector Arana Jr. in the first three rounds. With the win, Savoie ties with LE Tonglet for eighth in the points standings.

“The driver goes from zero-to-hero but I’m not a selfish person, this goes to my crew,” Savoie said. “Those guys worked really hard. The biggest thing is Vance and Hines. You’re running against a group of guys that want to win really bad, like I do, and to give you the power and tell you, ‘You have to find it, but it’s there,’ and you have to compete with them? Great company.”