Forty years ago, pioneering Funny Car driver and owner Don Schumacher won his first NHRA national event trophy. It was at the biggest event on the NHRA circuit; nothing topped winning the U.S. Nationals near Indianapolis.

But the native Chicagoan who lives mostly in Florida now, will consider the NHRA Gatornationals at Gainesville, FL, as home to one of the biggest days in his illustrious career. On Sunday (Mar. 17), reigning NHRA Top Fuel champion Antron Brown (above) and veteran Funny Car driver Johnny Gray won their respective categories at the Florida track to push Don Schumacher Racing’s total of NHRA national event titles to 200.

“On behalf of everyone at Mopar, I would like to extend our heartfelt congratulations to Don Schumacher and his team for reaching the 200-win milestone with victories by Johnny Gray in Funny Car and Antron Brown in Top Fuel,” Gorlier said. 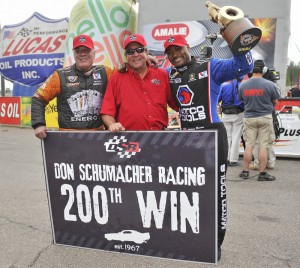 “Don has been a long-time loyal supporter and friend of the Mopar brand, as both a team owner and driver, making his first of many trips to the winner’s circle in a 1970 Plymouth Barracuda Funny Car at the U.S. Nationals. We applaud his drive and determination that led him to this remarkable milestone and wish him many more wins in the years to come.”

“It’s a tremendous reward,” said an emotional Schumacher, who will be inducted May 2 into the International Motorsports Hall of Fame at Talladega, Alabama. “I can’t say what this personally feels like. When we won both championships in November, my mother passed away on the day of the banquet the next day. I haven’t had joy really since then.

“Today brings a special meaning to all of my efforts out here for all of these years.”

“I just feel incredibly blessed to be a part of this whole organization,” said Brown, who moved around DSR teammate Tony Schumacher and the U.S. Army to take the points lead in the NHRA Mello Yello Series. “It wasn’t just Johnny and me who brought Don that 200th win, it was all of us together at DSR that made it happen. It wasn’t just my team and Johnny’s team, it was all of us together.”

For Gray, who turns 60 on Wednesday, he could not think of a better way to thank Schumacher for giving him a championship-caliber race team.

“It was awesome. Don has been absolutely great to me,” said Gray, who moved into a tie for first place with teammate Ron Capps and the NAPA Filters team. “It’s an awesome feeling for Antron and me, but it’s also an awesome feeling for everybody back down the line who contributed to the wins, including Don who started it.”