Brittany Force and the Monster Energy / Flav-R-Pac team picked up the final NHRA SpringNationals event victory at Houston Raceway Park on Sunday afternoon. It was the third win at Houston Raceway for Force, the 13th in her career and the first time she has won back-to-back races in a season. She won the Las Vegas NHRA Four-Wide Nationals April 1-3.

Robert Hight and the AAA Texas Chevrolet Camaro SS and Austin Prock and the Montana Brand / Rocky Mountain Twist team had quarterfinal finishes while John Force and the PEAK / BlueDEF PLATINUM Chevy had a first-round exit.

Coming into race day sitting No. 2, Brittany Force and the Monster Energy team stayed consistent from their qualifying efforts. In the first round, Force would have a clean 3.740-second pass at 329.42 mph while Josh Hart smoked the tires for only a 4.925 at 146.65. The second round put Force against Top Fuel veteran Shawn Langdon. Langdon would have the startling advantage but then drive into tire smoke and have to shut off early for a 5.589 pass at 128.73 allowing Force and her solid 3.773-second pass at 330.47 mph to win the round.

With the quarterfinal win, Force would face Billy Torrence in the semifinals. Both would leave the starting line in .084-seconds and both would put out a cylinder mid-track. Ultimately, Force’s seven cylinders would go 3.848-seconds at 317.19 mph to better Torrence’s 3.924 at 310.77 setting her up to run against Justin Ashley in her second final of the season.

After a delay due to an explosion in the Funny Car final, Force would be unrattled. The Monster Energy dragster would leave the starting line first with Force’s .041-second reaction time. Coupled with a 3.767-second pass at 321.42 mph Force would take the win over Ashley’s 3.763 at 329.58 with a .074 reaction time. The win also gives Force the points lead by 32 over reigning champion Steve Torrence. 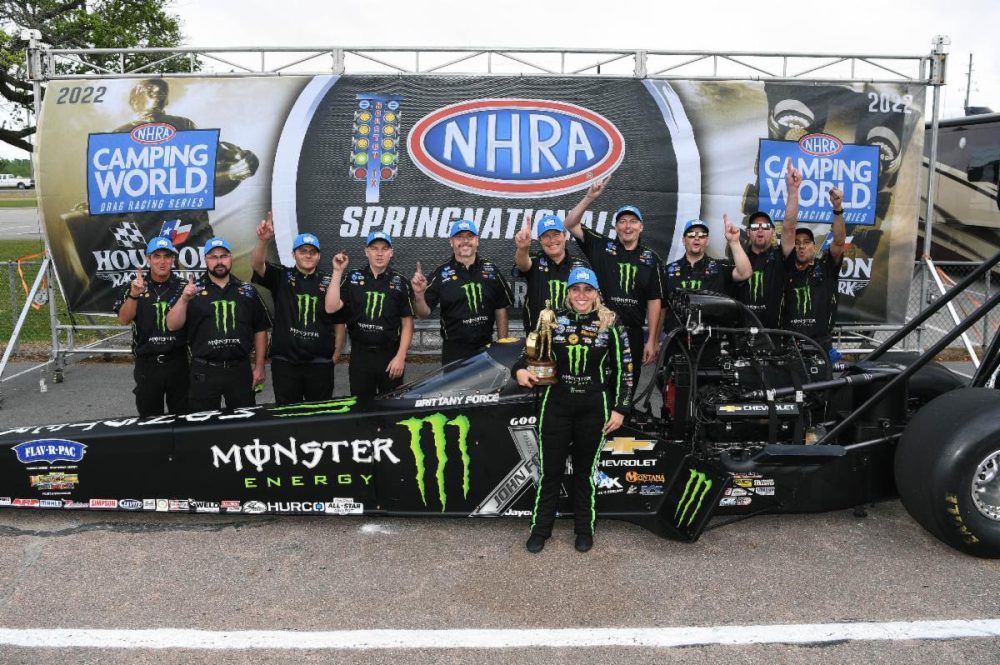 “My Monster Energy/Flav-R-Pac boys always have my back and they are the reason we got here today. Luckily, we got the job done in the final round. It wasn’t easy. It was a lot of me sitting down and trying to figure (things) out before going into the final round because it was a tough day for me. But we battled it out and got it done in the final when it mattered,” Force said. “In that delay, I’m just staring down that racetrack and making sure I keep my game face on. You can’t get distracted. It’s getting up there and doing your job the way you know how and, for me, having to majorly improve where I had been all day with reaction time. We figured it out. I knew David Grubnic and Mac Savage, all the boys, would figure give me a great racecar; they always do.”

Robert Hight and the AAA Texas Chevy would have their defense of the NHRA SpringNationals come to an end in the second round of competition. After first outrunning Terry Haddock with a 3.937-second pass at 324.05 mph to Haddock’s 4.078 at 287.05 in the first round. Hight would line-up against Chad Green next. The AAA Texas team would have the advantage at the starting and the lead until they started losing traction and dropping cylinders. Green would get around Hight’s 4.240 pass at 227.04 with a 4.090 at 267.16.

“Not the way we wanted to go out for the last race in Houston, but it wasn’t a bad weekend for this AAA Texas team,” Hight said. “I’m going to have a lot of good memories at this racetrack, my first win and the other three that came after, winning with Brittany, it’s definitely sad to see this place go but all the Texas fans, come see us in Ennis, Texas at the Texas Motorplex. It’s another AAA Texas race and another great show just a handful of hours down the road.”

Coming off one his best qualifying efforts, Austin Prock took the Montana Brand / RMT dragster for a solid 3.743-second run at 328.70 mph that was no match for Alex Laughlin as he smoked the tires to go only 5.125 at 146.19. In the second round of eliminations, Prock would have a rare misstep, red-lighting by leaving .006-seconds too early against eventual race runner-up Justin Ashley.

“I wasn’t worried about Justin leaving on me at the line, I was comfortable but my foot twitched and right when it twitched the ambers were falling so I just went with it and it was too soon. There’s just no room for error when you average between .040 and .050 reaction time,” Prock said. “I’ve been pushing myself to be better because I want to be a .040 guy every time I roll this Montana Brand / Rocky Mountain Twist dragster up to the line. The way I see it if the crew chiefs missed their mark by one thousandth of a second, they’d be upset so, that’s where I’m at. Overall, it was a great weekend. We learned a lot. I was really comfortable in the car, had some good reaction times and the good thing about it is, Charlotte is right around the corner, so you don’t have time to stew.”

John Force and the PEAK / BlueDEF Chevy team, in arguably one of the toughest first round matchups with points leader Matt Hagan, would just come up short. Force’s bid for a win 20-years after his 100th victory came to an end with a 4.010-second pass at 328.06 mph that was bettered by Hagan’s 3.954 at 325.77.

“Well, not the weekend I wanted. Struggled a little bit but how about Brittany and that Monster Energy / Flav-R-Pac team? They’re really on a roll. Everyone went some rounds today, figured some things out, even us,” Force said. “I’m not worried about this PEAK team. Danny Hood and Tim Fabrisi, they’ll be ready to go in Charlotte next weekend.”