A week after winning her first race of the 2021 season, Top Fuel star Brittany Force continued to roll, qualifying No. 1 for the fifth straight event on Saturday at the 39th annual Lucas Oil NHRA Nationals at Brainerd International Raceway.

Force stayed red-hot and rocketed to the No. 1 spot for the seventh time in 12 races this year and the 27th time in her career, going 3.675-seconds at 334.98 mph in her 11,000-horsepower Monster Energy dragster during Saturday’s final qualifying session. The run sent her past Steve Torrence for the top spot and set the track speed record in the process. Force will aim for her second straight victory on Sunday and second career win in Brainerd, feeling all kinds of momentum following her victory last weekend in Topeka and standout run on Saturday at BIR.

“Coming off of that win in Topeka with my dad (John Force) was pretty incredible for all of John Force Racing,” said Force, who is currently second in points. “We had been chasing that first win all season long and we got it done last weekend. Our plan is to repeat that this weekend in Brainerd. There’s a different energy in the pits after getting a win. There’s no better feeling than winning and that’s why we’re out here. It’s just trying to find that again on raceday. We want to win again and I think we’re in a good place. We have to continue to step it up.”

Torrence, the points leader and three-time defending world champ, finished in the No. 2 spot after a stellar run of 3.684 at 329.91. The standout Texan will try to win for the first time in Brainerd on Sunday, as it’s currently the only track on the NHRA tour where Torrence hasn’t won. Mike Salinas, who was the provisional No. 1 qualifier on Friday, finished third with a 3.711 at 322.58, improving on his run from Friday.

In Funny Car, Tasca stepped up during the final qualifying session, powering to No. 1 with a run of 3.870 at 334.15 in his 11,000-horsepower Motorcraft/Quick Lane Ford Mustang. Tasca, who has two wins this season, was the provisional No. 1 qualifier on Friday and then had to grab it back from Cruz Pedregon during the final session on Saturday. It is his second top spot this year and seventh in his career and Tasca, who was the points leader for the bulk of the regular season, will try to get back on track on Sunday with the Countdown to the Championship playoffs fast approaching. 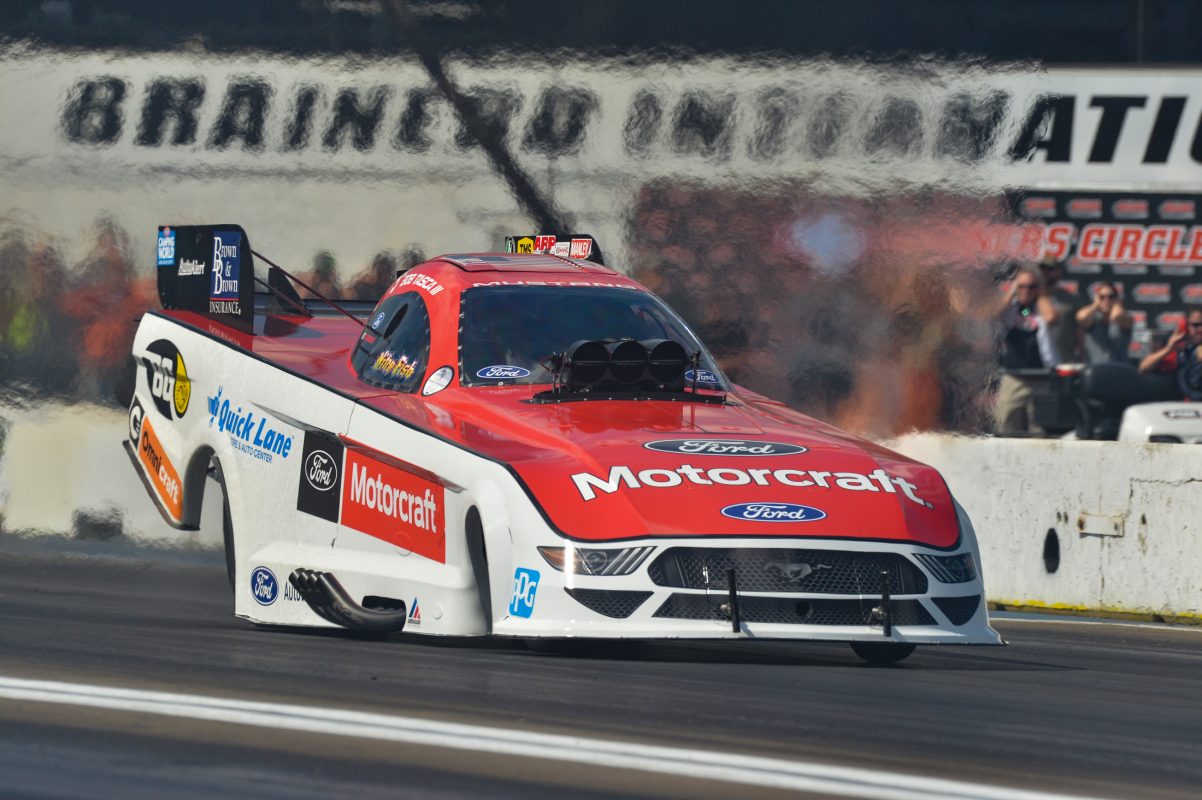 “It’s great to be back out here in Brainerd with all these Ford fans,” said Tasca, who is looking for his first career win at BIR. “(Crew chiefs) Mike (Neff) and Jon (Schaffer) have been a little frustrated these past couple races, there’s no question, and we haven’t caught our stride like we did at the beginning of the season.

“They’ve been working hard on a little different set-up and we found it last night. We were disappointed this morning and that last run, at half-track I was celebrating because I knew it was on a run. It was straight as an arrow and a lot of fun, and we just have to do it four more times (on Sunday).”

In the E3 Spark Plugs NHRA Pro Mod Drag Racing Series presented by J&A Service, Justin Bond jumped to the top spot in the final session, going 5.757 at 248.20 in his ProCharger-powered Bahrain 1 Racing Camaro. It is his fourth No. 1 qualifier of 2021. Points leader Jose Gonzalez, who has won the last two races, is second with a 5.758 at 247.34, and two-time defending world champ Stevie “Fast” Jackson is third after going 5.777at 247.84. The Pro Mod race is presented by Stinar in Brainerd.