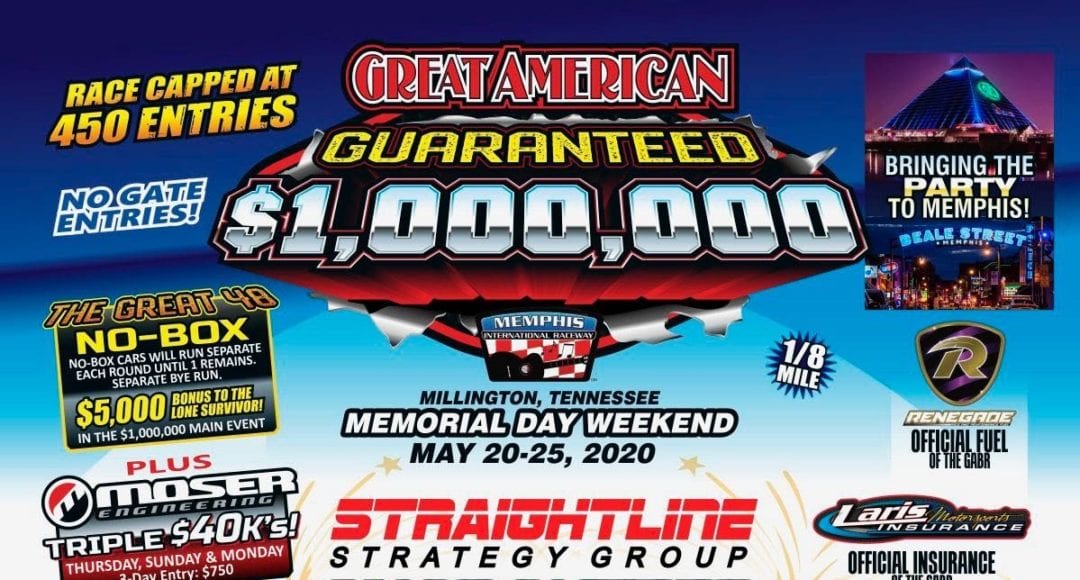 The Great American Bracket Race is about to get a whole lot bigger in 2020.

Promoters Britt Cummings and Gaylon Rolison revealed on Tuesday that there will be a guaranteed $1 million-to-win purse for next year’s race, which will now be aptly called the Great American Guaranteed Million.

It will take place May 20-25 at Memphis International Raceway, and it’s an idea that has been on Cummings’ mind for over a year. With $1 million on the line, he’s ready to take the race to unprecedented levels in 2020.

The annual Memorial Day Weekend race has become one of the must-attend events for bracket racers, but with a $1,000,000 payout to the winner, it’s now in another stratosphere.

Cummings also promises this race will be unlike any other big-money bracket race. They’re capping entries at 450, with pre-entries opening on Oct. 11. He’s also offering three different payment plans for the $3,000 entry, including a paid in full option, but Cummings wanted a cap on entries.

For one, he’s adamant the prize money won’t be an issue, but more importantly, Cummings and Rolison didn’t want racers competing through the night. The weekend is about a festive atmosphere and he wants to give the $1 million winner ample time to celebrate.

“If a guy is going to win a million bucks, we don’t want to be at 2 or 3 a.m. We don’t want it to be at midnight. We want to be when everyone is awake and everybody on the premises can high-five you when you win, and then you get to enjoy it,” Cummings said.

“At our race this year, we had 525 entries and we went late every night. That’s not the event we wanted to have. We want to finish in a timely manner, that way a racer can enjoy the race. We want them to finish at 8-9 p.m. and then they socialize with their friends at the track. The social part is big for us. We didn’t have a lot of that going on at our last race, and we didn’t like it.”

There’s plenty to like about this race, including the record-breaking payout.

But Cummings has gone into pain-staking detail to make sure it is executed properly, spending some portion of his day on the race for the past year. Cummings and Rolison have conversed everyday since December to start preparing for the race, intent on offering something different.

The race will include a trio of $40,000-to-win races on Thursday, Sunday and Monday, with parking starting on Tuesday, May 19. Testing kicks off the event the following day, with the first of the Triple 40s taking place on Thursday. On Friday, each racer will get a timed entry and then they will run the opening round and the re-entry round before finishing for the night. Cummings estimates that will take 13 hours, finishing at a reasonable hour.

With the entries down to a controllable amount, racing for $1 million will start Saturday morning with a time run before everything is decided, with plenty of time to celebrate afterwards.

“We should be able to run that race in about 6-7 hours and be done mid-evening and then we have time to do all the fun stuff – the party, the cookout – and the winner actually gets to enjoy it,” Cummings said. “It should be max capacity on the starting line when the final goes down.”

It’s a scenario Cummings has envisioned since he hatched the idea in his mind during a 12-hour drive to Tulsa. With an already established brand, the Great American Bracket Race became the Great American Guaranteed Million. Cummings also predicts big things coming from sponsors and a television announcement leading up to the race.

“The TV thing is going to be huge,” Cummings said.

Cummings and Rolison made a name for themselves with their unique team challenge races on Memorial Day Weekend. With a million dollars on the line starting in 2020, the race has a chance to reach an incredible level in the sport.

“We started getting a lot of entries, and we knew we had a good brand and ran good races. It was fun, the racers like us and they trust us,” Cummings said. “I knew somebody was going to do one of these races, so why not us? It’s not about the notoriety or anything, but I think we have a good brand. Ultimately, it’s about having fun and a good time.”