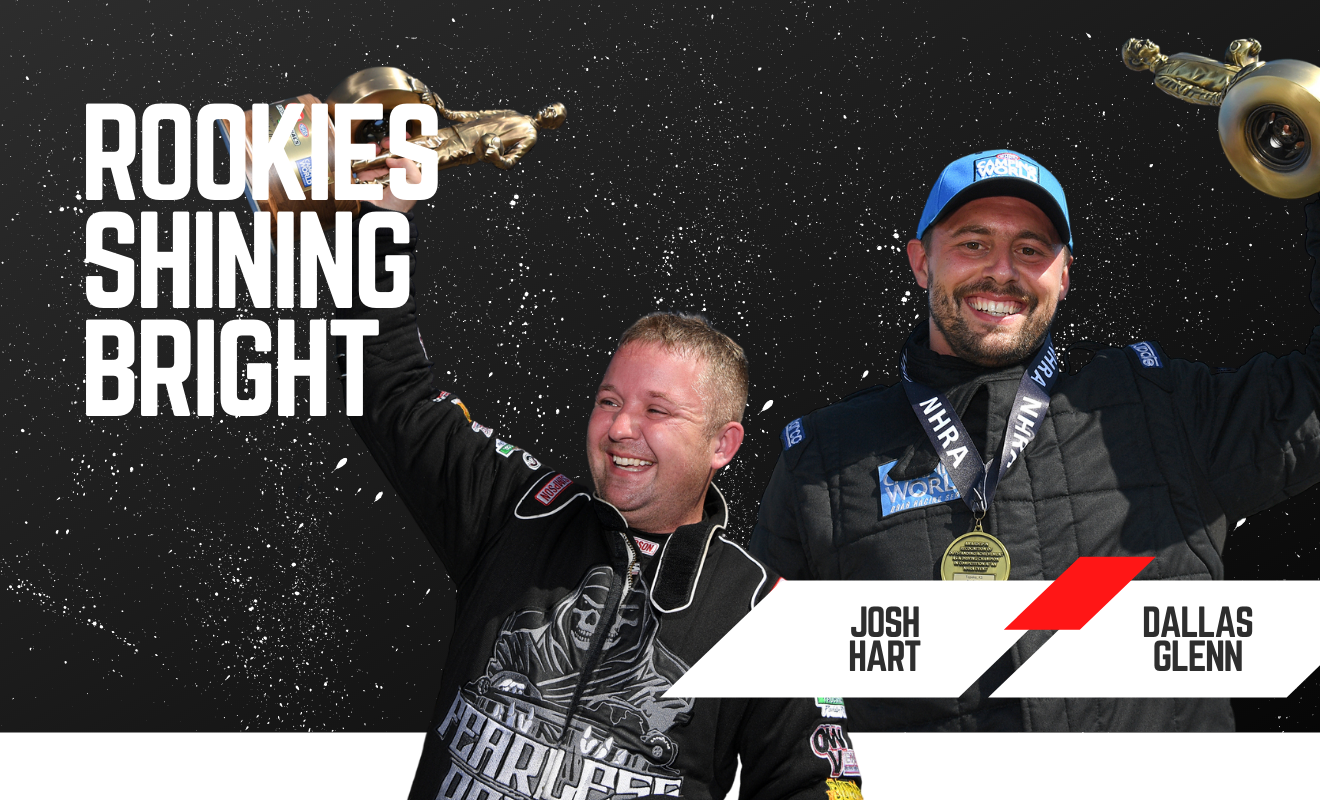 In recent years, the NHRA Rookie of the Year award has often been a one-sided competition with a clear winner by the end of the season. But this year, two rookie drivers have emerged as near-equal contenders: Dallas Glenn and Josh Hart.

Glenn, who worked as a crew member on KB Racing’s championship-winning Pro Stock team for the last several years, has turned a planned five-race Pro Stock campaign into a full-season run at the 2021 NHRA Pro Stock world championship. The accomplished bracket racer has established himself as one of the best leavers in a class that is now loaded with young talent.

Hart is a familiar name for fans of the NHRA’s Top Alcohol Dragster class, where Hart won several races in one of the quickest A/Fuel dragsters in the class. He’s a two-time winner at the prestigious U.S. Nationals in Indy. The 38-year-old Florida native made his Top Fuel debut at his home race, the Gatornationals in Gainesville, earlier this year and left with his first Top Fuel win.

The Rookie of the Year award, previously known as the Auto Club Road to the Future award, is decided through a vote by drag racing media members. Voters are encouraged to consider “On-track performance; relationship with fans, media, and sponsors; participation in NHRA promotions; the number of events completed; and driver’s potential as a future star of the sport,” when voting for a candidate.

First, let’s consider the on-track performance for both drivers.

Glenn has attended 15 races and qualified at all 15 in his KB Racing-fielded RAD Torque Systems Chevy Camaro. He has two wins in four final-round appearances, with a round win-loss record of 23-13. He’s been the points leader and he’s currently third in points.

Hart is running a part-time schedule with his Burnyzz/Technet dragster, qualifying for all 11 races he’s attended. He won both final rounds he appeared in, with a 17-9 round win-loss record. His part-time status has hurt his points position, as he’s currently 11th in points with a best position of fourth. [Correction: Hart was the points leader after winning the first race of the season.]

It’s also important to consider Glenn and Hart as more than just drivers. Glenn continues to serve as a key crew member on the multi-car KB Racing team. He services the clutch in his own car and drives the hauler to the races and back. Hart is his own team owner and has worked with crew chief Ron Douglas to assemble a top-flight operation, which is now based in Brownsburg, Indiana, with most of the other nitro teams.

As for potential as a future star in the sport, both drivers seem determined to keep their starpower burning bright for years to come. Glenn announced in early September that RAD Torque has already renewed its deal as his primary sponsor for the 2022 season. He also signed an associate sponsorship with Summit Racing Equipment for the Countdown races, though one could expect that relationship to grow in the future. Similarly, Hart will carry his Technet Professional sponsorship into the 2022 season, where he plans to compete on the full tour. Technet and parent company Advance Auto Parts have been on board with Hart since 2016.

Both drivers’ PR teams solicited testimonials from standout personalities in the drivers’ respective classes. Those testimonials, from “Big Daddy” Don Garlits and Steve Torrence vouching for Hart to Pro Stock champions Jeg Coughlin Jr. and Jason Line speaking up for Glenn, were posted on the drivers’ social media pages and shared with the media.

“He is having a hell of a season and it ain’t over yet,” said Don Garlits, Hart’s mentor, friend and fellow Ocala, Florida, resident. “I hope he gets rookie of the year. I’ll tell you like the guy told his son when he wanted to be an artist. He said either you are an artist or you are not an artist. You don’t learn how to be an artist. Same thing with being a good driver, you can’t buy it and you can’t learn it. You just got to be it. Josh is a good driver. You can take another guy just like him and put him in the same car and train him and train him, but he won’t ever do nothing.”

“Hands down Josh Hart is the rookie of the year,” said Steve Torrence, a four-time Top Fuel world champion and current points leader. “The guy has come out and driven at a championship level each and every time he has been in the car. He is a very respectful and professional young man. I have watched him through the alcohol ranks and I have watched him coming up into the Top Fuel car. The job he does overall is unparalleled compared to any other rookie out here. I will say it again, he is hands down the rookie of the year.”

“I think Josh does a great job with everything,” said Justin Ashley, the 2020 NHRA Rookie of the Year. “His biggest attribute is his performance on and off the track. His performance on the track speaks for itself. He has won two races his rookie season including the first race he every entered in Top Fuel. That is not an easy thing to do. He is also an excellent representative for his sponsors off the track. I think that goes a long way. You can tell he has a plan, and we are starting to see that plan come together. I think it is clear he is going to be here for the long run.”

“Competition of teams aside, Dallas Glenn absolutely deserves Rookie of the Year,” said Erica Enders, a four-time Pro Stock world champion. “To come out, in the most competitive class and hang with the greats, is rare. To be able to drive for one of the best teams, in superior equipment, is a blessing and allows his skill to shine. A lot of people don’t realize how challenging it is to drive one of these cars, let alone do it well. He has definitely worked for his opportunity. Money is the easy part, it’s the hard work and sacrifice that set the good apart from the great. I know he will be a great competitor for years to come.”

“I think Dallas possesses every quality a driver needs in order to win the Rookie of the Year this year,” said Jason Line, 2004 Rookie of the Year and a three-time Pro Stock champion. “He’s more passionate about the sport than anybody and he’s not a flash in the pan. He’s a long-term guy and he’s in it for the long haul. He’s chalked full of talent and I think he deserves Rookie of the Year; he’s more than deserving.”

“I’ve known and watched Dallas race for a long time in the sportsman ranks and you could tell he was a quick study and executes well,” said Jeg Coughlin Jr., a five-time Pro Stock world champion. “Seeing him transition into the crew at KB Racing was an interesting move, and as the years passed, I knew if he got his chance at getting behind the wheel, he’d be tough to beat. Seeing his immediate success was not a surprise to me.”

Of course, Glenn and Hart aren’t the only Rookie of the Year candidates, they’re just the leaders. Other candidates include Artie Allen, Krista Baldwin, Buddy Hull, and Joe Morrison in Top Fuel, Bobby Bode and Chad Green in Funny Car, and Mike Callahan, Marty Robertson and Rob Tucker in Pro Stock.

So, who do you think deserves the 2021 NHRA Rookie of the Year honors? The winner will be announced during the NHRA Finals at Auto Club Raceway in Pomona, California, Nov. 11-14.