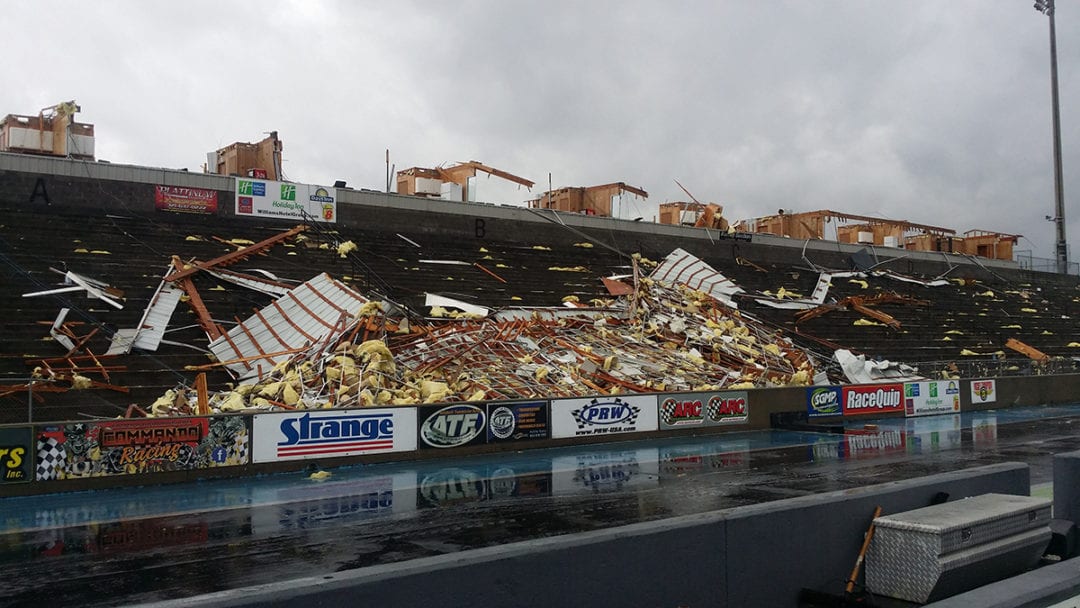 Working alongside the staff of South Georgia Motorsports Park, Donald “Duck” Long and his Duck X Productions team are well underway with their cleanup effort at the facility after it was severely damaged when a devastating storm and tornado struck the area over the weekend. The facility’s trademark row of suites above the main grandstand were completely leveled during the storm, but the timing tower, scoreboards and timing system are reportedly still in working order and largely undamaged.

“We’re still sorting it out,” said Long, who is just 22 days out from the eighth-annual running of his now-famous Lights Out drag radial shootout at the track. “The suites are obviously destroyed, so we have to figure out what we’re going to do with that area, but more than anything we’re just thankful that no one was here when the storm hit, that no one was injured, and that we’re still going to be able to bring the baddest drag radial cars in the world to South Georgia [Motorsports Park] for Lights Out 8. Our thoughts and prayers are with all those that have been hit by this storm, and especially those that lost loved ones and property.”

Duck concluded, “We also have to thank everyone down here at South Georgia Motorsports Park for working around the clock to get things cleaned up, and all the people who have reached out and offered to help. It’s been overwhelming, and it is truly appreciated.”

Stay tuned for updates as they become available.