Touched by the adrenaline of speed, high horsepower and the pure thrill of the sport of drag racing from a young age, California native Julie Braskett recently made good on a promise she made to her father before his passing, and did so in style at Frank Hawley’s Drag Racing School where she earned her NHRA competition license at the school’s Florida location in one of their dragsters.

Braskett’s father, Dave Braskett, who was an automotive paint salesman, and drag racer Gary Burgin, teamed up to field one of the best cars of the gasser era and as “Braskett and Burgin”, left a legacy that is among the best of the early southern California Fuel Funny Cars.  Starting when she was six, Braskett spent years right by her father’s side as he traveled the various circuits and competed with his gassers, funny cars and later, dragsters. 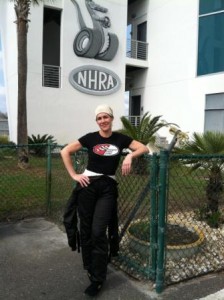 “I basically grew up at OCIR, Pomona and Ontario,” said Braskett, now 47 and a make-up artist by trade. “I was a drag racing girl with nitro in my blood for sure.  I had made a promise to my father that I would get my license and just over the last six months, I have been back heavily into the scene where I am now garnering a name for myself. I’m meeting so many of the drag racers that knew my father on top of meeting so many who may not have known him and all that he did in and for the sport. He was truly a pioneer. So, I’m pretty much out at every event that’s somewhat local.”

“Attending Hawley’s school was probably one of the best things I’ve ever done in my life,” said Braskett of her trip to Gainesville, where she participated in the Super Class. “Frank is the best, I just loved him.  He is so patient and he goes into so much of the human mind and things that apply way above and beyond the race track.  That right there was what really clicked for me during my time in the school.”

“When I first got there and very first got into the car, I was scared to death of it,” she admitted. “I honestly thought, I was going to go in there and seamlessly just do this, but the horsepower just shocked me.  When I made my first run, I was like w-o-w. These cars are a little bit faster than what I thought they would be. I have gone high mile-per-hour before, but not in such a small amount of time. The launch is incredible.”

“But with what Frank taught, it wasn’t some big scary monster and because of his teachings, I was able to quickly get over that,” she added.

During her two-day Super Class, Braskett points out how her comfort level driving the dragster changed night and day, and as she progressively made longer runs down the quarter mile, she began to feel she was certainly right where she belonged. 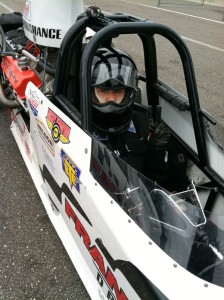 “When I made those last couple of full passes, I knew this is what I wanted to do,” she noted. “This is my passion and when I finally started to just floor it like I was instructed to and got over my fear, there are no words to describe the rush and what it felt like to make it to the other end.  I was yelling in my helmet and it was just an amazing ride.”

“I had my dad’s picture with me in the pocket of my fire suit the entire time,” she continued. “And I know if he were still here, we would have a nostalgia car and he’d be my crew chief. It’s sad, but I did keep my promise to go get my license. I wasn’t sure I was going to do it, but I did.”

“I recommended Frank’s school and this experience to everyone,” she exclaimed. “You won’t believe how incredible it is and how much you will actually learn about yourself. So many of the techniques he teaches you can really help well beyond the track. Like not beating yourself up and learning to not dwell on things you may have done wrong. There are many concepts that just really make simple sense.”

Shortly after earning her NHRA license at Hawley’s school, the new graduate flew back to the west coast and right to the first NHRA event of the season at Pomona, already contemplating her next move.   “I really would like to go back to Frank and work on getting my Top Alcohol license and in the short term, at least getting back out on the track to make some laps in the Super Comp dragsters again when the school comes out to Vegas later in April.”

“My dreams of running a nostalgia funny car have not gone away,” she added. “But my dad did spend his last twenty years racing driving a dragster. So, after being in a dragster, I’m thinking that may be just what I stick with.”