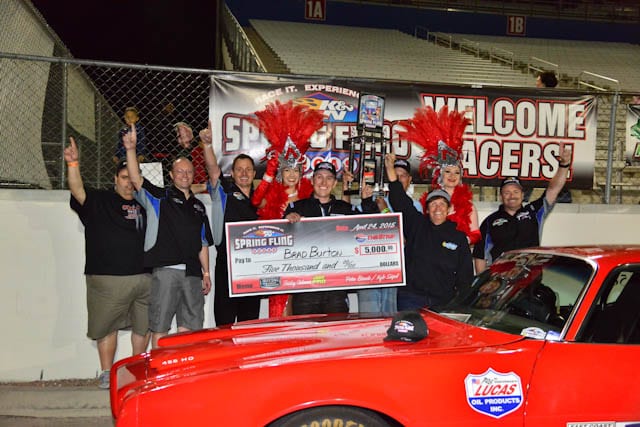 The patented Spring Fling $20,000 Challenge started off Maytag Silver State Refrigeration Friday where 20 randomly selected racers are given one chance at the Christmas tree to score either a .00X or perfect .000 reaction time. A .00X gets you a one hundred dollar while perfect earns you $1,000. Only two drivers managed a .00X, Ty Ishibashi and Trent Umberger.

With no time trials, racers were eager to get down to business and 142 Pro class drivers and 333 Super Pro competitors did just that starting at 8:00 in the morning.

As the semis unfolded, there will be no repeat winner in Pro as Lang was defeated by Harrison and Parsons, Burton and Mangus moved on. In the round of four, former ‘Fling winner Burton defeated Parsons to go to his second final round in as many days. And Mangus couldn’t quite get it done as Harrison took out the former winner.

Final round, Pro class, Burton looking to better his last night runner-up finish and Harrison attempting to thwart that effort but it was not to be as Harrison turned on the red light handing the win to Burton and marking his destiny to celebrate with the famous Vegas Showgirls in the winner’s circle.

“I was pretty pumped up to better last night’s effort,” said Burton. “But my mom and dad put me a good place all day and I’m happy to put last night behind me with this win.”

In the semifinals, the dragster contingent led by Pennington was out-numbered by the three remaining door cars of Coughlin, Pierce and Deadman, guaranteeing at least one door car in the final round. Coughlin, coming back to his roots after some time off from his NHRA Pro Stock career, faced off with Pierce, and the flat black wagon of Coughlin prevailed. In the other half of the semis, Deadman and his door car faced the only remaining dragster of Pennington with the “Peeps Show” of Pennington making his way to another final round with the win.

The final was an epic battle with both racers recording identical “double-0” reaction times but it was the Peeps Show taking the win away from Coughlin. A man of few words, Peeps said, “I hope the live feed is still on because I want to thank my Dad at home for making this all possible.”

Continue to tune into Bangshift.com for the live Internet video feed and stay tuned for a major Spring Fling announcement to be made on Saturday morning.