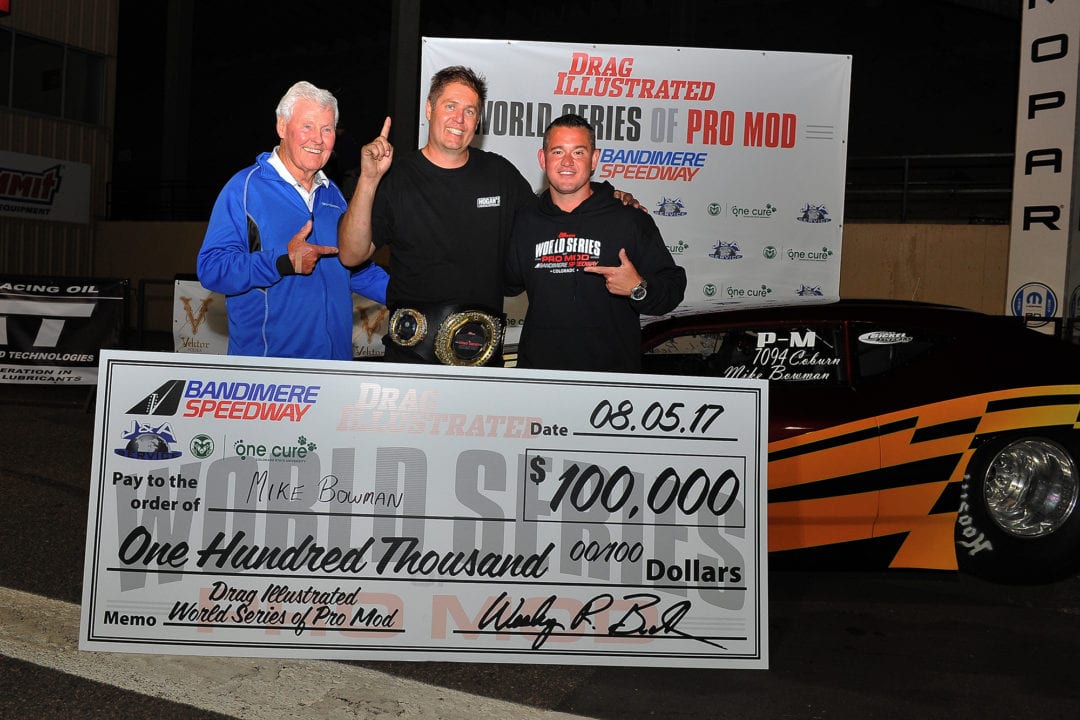 “This is right there at the top of my list of accomplishments,” said Bowman. “I’ve won NMCA championships, Pro Street races, and the Street Car Super Nationals last year. I won a race here in 1995 at a Super Chevy Show race. That was the last time I raced here on the mountain. This event is just awesome. This whole deal just went so fast. Sometimes things just go your way, and for me, this weekend went my way right out of the trailer.”

Bowman began the week at the Precision Racing Suspension/Penske Racing Shocks Test Session, where his turbocharged ’69 Chevelle made Bandimere Speedway history, though only he and a few others knew because of the no-scoreboards format of the event.

“I unloaded the car and made the first full pass, and ‘Sporty’ Bandimere came over and told me I made the first five-second door car pass here at Denver. That was an honor to me. The weekend just kept getting more amazing for me. I ended up making six (test) runs and decided to sit out a couple of the rounds. I wanted to save my motor for the race. The car’s already been down the racetrack six times, I don’t need to go out there and beat on it. I think that was the right decision because you never know what’s going to happen on the very next run.” 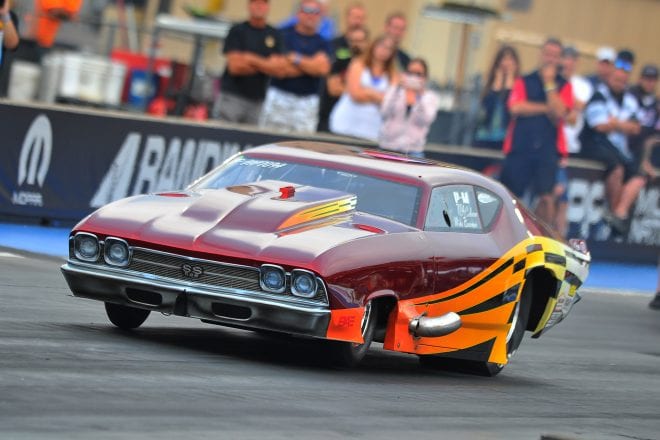 Instead of using qualifying to set the eliminations ladder, Drag Illustrated Editor-in-Chief and race founder Wes Buck picked the first-round pairings via a random drawing on his Facebook Live show on July 5th. Bowman was inserted into the fan vote spot, who was set to race the winner of the $10,000-to-win Aeromotive Wild Card Shootout held Friday, August 5th. Derek Menholt earned the Wild Card Shootout win, setting the final pairing in the 16-car ladder.

Menholt left on Bowman in the all-turbocharged matchup, but Menholt lost traction and Bowman charged ahead to the finish line. He dipped into the fives again against Michael Biehle in the second round, using a 5.997 to defeat Biehle. A strong 6.024 was all Bowman need to drive around the .016-second reaction time by Shane Molinari in the semifinals.

In the final round, Bowman would face Grand Junction, Colorado’s Steven Whiteley and his J&A Service supercharged ’14 Cadillac CTS-V. Whiteley was quietly the most consistently quick driver in eliminations. He ripped off a sub-six-second run in the first round against Tommy Johanns, who was inserted into the field to replace Mike Knowles after his Blown Money ’67 Mustang was damaged in a top-end accident on Friday night. Whiteley improved over Eric Latino in the second round, then used a holeshot advantage to defeat Steve Matusek in the semifinals.

As the tree dropped for the final round, Bowman’s .024 light was a tick quicker than Whiteley’s .029 reaction time. Both drivers lost traction down track, but Bowman was able to recover and recorded a 6.274 to defeat Whiteley. Bowman and his team returned to the starting line, where they were awarded the WSOPM championship belt and a $100,000 check by John Bandimere Jr. and Wes Buck.

“I wasn’t really under that much pressure going into the final,” Bowman said. “I just saw it as another round I had to win. The not knowing what the other guy ran in the previous round, that’s what made it a challenge. We live and die by knowing those numbers. We usually know what they ran and they usually know what we ran. Steven whipped me at the Four-Wide Nationals in Charlotte – he nailed me on the tree and outran me – so of course I thought about that. And he’s so good; he’s a good driver. The guy is just awesome, as is his whole family; they’re drag racers. But I wasn’t really nervous. I knew I had to cut a good light and I guess I did – I was .024 on the tree. I figured we were going to be door-to-door and it would be settled at the Christmas tree. I was like, ‘I can’t let him beat me again on the tree.’ I was digging hard. That’s honestly what I was thinking about, how hard I was going to dig for the tree and not make a mistake.”

Bowman was sure to thank his supporters, including his family; his wife, Kristy; his crew members, Brian Strange, Taylor Strange, Alex Grinder and Chris Costanza; his employer, Ray Coburn at Coburn Equipment; Jeremy Evrist and Brad Anderson at Brad Anderson Enterprises; and Brad Personett.

In addition to the prize money and championship belt, Bowman will also receive a state-of-the-art custom helmet from Stand 21 Racewear, as well as a one-of-a-kind World Series of Pro Mod championship ring presented by Noonan Ultimate Race Engineering.

For more information on the Drag Illustrated World Series of Pro Mod presented by One Cure and J&A Service, please visit www.WorldSeriesOfProMod.com.