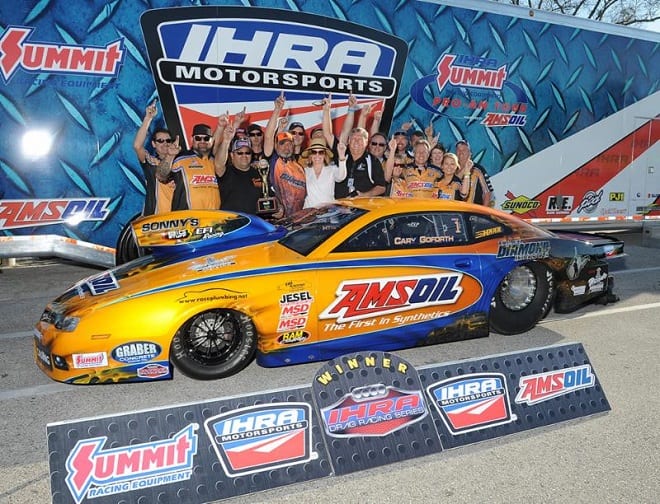 The stage has been set for one of the best season’s in International Hot Rod Association (IHRA) drag racing history. The IHRA AMSOIL Nitro Nationals at Orlando Speed World Dragway put the world’s best driver’s center stage and the result was unprecedented.

The 2016 season opener kicked off over the weekend with full fields in all classes that included 2015 World Champions, veterans and a few newcomers to the IHRA Drag Racing Series. What ensued over the three-day event marked one of the most exciting competitions with major upsets, record times, mechanical issues and some of the closest finishes in years.

The AMSOIL Nitro Funny Car class appeared to pick up where it left off in 2015 with Jason Rupert and Mike McIntire Jr. running side-by-side in the first two rounds of qualifying. By the end of the qualifying sessions, it was Rupert who took the top spot followed by Mark Sanders and McIntire Jr. The momentum continued for Rupert as he shattered the AMSOIL Nitro Funny Car record with a 5.559 at 261.93 mph in the first round. The semifinals brought with it an unexpected twist as Rupert and Shawn Bowen faced off and both shook their tires after the start. Bowen recovered from the incident and went on to the finals against Mike McIntire Jr. The tree turned green and the duo raced side-by-side until McIntire got out of the groove and Bowen capitulated ahead giving him the first win of 2016.

JR Carr looked like the car to beat in the Pro Stock class after he put down a 6.234 at 225.26 mph pass in the first round of qualifying. The 2015 Memphis winner secured the top spot for Sunday’s eliminations followed by Trevor Eman and John Konigshofer. JR Carr’s trek to the winner’s circle was cut short in the first round of eliminations as he encountered problems on the track and 2015 IHRA Pro Stock Champion Cary Goforth defeated him with a 6.484 at 223.02 mph pass. Goforth and John Pluchino matched up in the final round of eliminations. Pluchino encountered a similar fate as Carr, and Goforth claimed the win with a 6.35 at 224.58 mph run.

The Pro Mod class became a battle of new series regulars Billy Harper, Jerico Baldulf and Adam Flamholc. Harper set a new elapsed time record in qualifying with a 5.875 at 241.32 mph and became the number one qualifier. In Sunday’s elimination rounds, Harper and Baldulf advanced into the semifinals but it was newcomer Adam Flamholc that quickly came into the picture. He laid down an impressive 5.894 at 237.80 mph pass against Harper’s 5.966 at 233.68 mph in the semifinals. Flamholc went up against Jerico Balduf in the Pro Mod finals and the epic battle turned into a nightmare for Balduf as a motor problem plagued the New Smyrna Beach, Florida resident. Flamholc ran a 5.884 at 246.08 mph and celebrated his first IHRA win.

2015 IHRA Nitro Motorcycle World Champion Jay Turner sported a new motorcycle over the weekend and looked to be continuing his dominate performance from last year as he qualified in the number one position. Rickey House and Randal Andras rounded out the top-three qualifiers in the Nitro Motorcycle class. Newcomer Jake Stordeur took the class by surprise as he defeated Turner in the first round of eliminations and eventually ended up going into the final round with Jay Turner’s teammate Randal Andras. Andras ran a 6.380 at 215.62 mph against Stordeur’s 6.649 at 207.75 mph run and took home the first Ironman of the 2016 season.