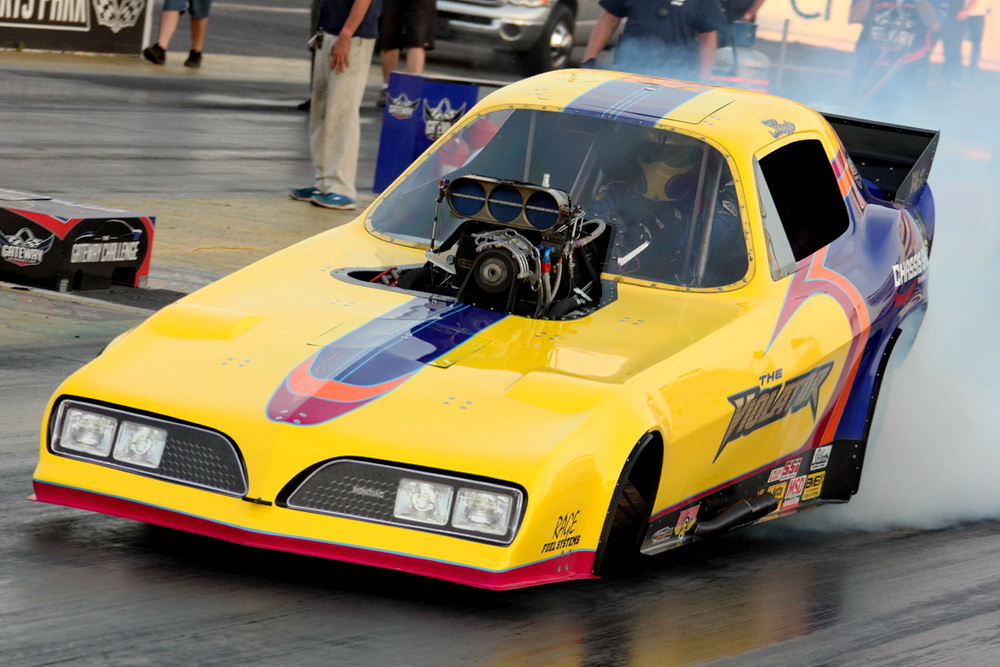 The Hedman Husler Hedders DragRacingOnline.com AA/FC Challenge presented by Comp Cams opened its sixth season May 9-10, with a brand-new race, the Nitro Rendezvous at Gateway Motorsports Park, just across the Mississippi River from downtown St. Louis. Although the car count was a little short, the racing action was exceptional with teams coming from Washington, Oklahoma, Michigan, Missouri and Wisconsin.

Defending DRO national champion Shawn Bowen (above) and the Bowen family’s “Violator” nitro flopper continued their domination of the series dating back to last year. They were the quickest and fastest car from the first qualifying lap of 5.827 at 245.32 mph to their semifinal round 5.817/244.69 thrashing of number-two qualifier Mark Sanders in the “Mr. Explosive” Mustang tuned by his son, Jake. 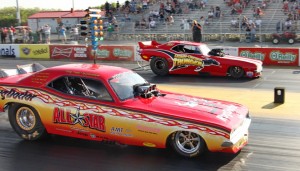 Between rounds, crew chief Mike Bowen tuned up the Pontiac and as a result they reset the Gateway Motorsports Park track AA/FC record for ET and Speed to a stellar second-round lap of 5.765 at 254.32 mph.

Bowen led all qualifiers with his 5.82, followed by IHRA series regular Sanders in his first Hedman Husler Hedders DRO series appearance with a 5.915 at 245.63 mph. Rounding out the qualifying was Aussie ex-pat Barrie “Bazz” Young driving his Jerry Newman-tuned “Down Under Thunder” 1969 Camaro to an early shut off 6.881 at 154.74. Oklahoman Fred Farndon’s Chevy followed at 7.395 and Greg Jacobsmeyer’s Mopar was at 7.432 seconds.

With only five cars in the field, top qualifier Bowen got a bye into the semifinals. In the other two first-round races St. Louis area racer Greg “Jake” Jacobsmeyer hooked up against Sanders with Sanders getting to the stripe first despite Jacobsmeyer recording his best lap of the event, a 5.98+ losing effort.

Young advanced to the semifinals easing by Farndon when Farndon’s “Nitro Express” shook the tires hard just off the line and had to pedal the throttle.

With rain predicted to move into the area, the weather and track were at their best for the second round of eliminations, which went off about 6:30 p.m. Bowen booted the “Violator” Pontiac to a 5.76/254-plus lap, driving by Sanders’ best ET of the event, a 5.908/244. Bowen’s ET and speed would be good enough for a new national record if he could repeat or better those numbers in the final round.

In a six-car field the quickest loser in the first round of eliminations comes back in order to have three full round, which was Jacobsmeyer. Jake, who had burned a piston running the 5.98 pass in the first round, backed down his tune-up to keep from damaging his engine again and still ran a respectable 6.096/237.88 that, combined with a massive holeshot, easily covered the troubled 6.329/226.47 from Young and advanced to the final round against Bowen.

In the final round, Bowen left first with a .086 reaction time to Jacobsmeyer’s .112 effort. Bowen’s eighth-mile numbers were an impressive 3.870/201 mph that was nearly two-tenths quicker and 20 mph faster than Jacobsmeyer’s 4.181/180.16 for the same distance and the race was over for all intents and purposes. Jacobsmeyer, knowing he wasn’t going to catch the Champ, eased his car to an early shut-off 6.345/220.84.

Shawn Bowen and the team led by his father, Mike, had an absolutely stellar weekend. They left the first annual St. Louis Nitro Rendezvous after setting Low ET in every round with another race win to start the 2014 season and the series points lead.

The second event of the Hedman Husler Hedders DragRacingOnline.com AA/FC Challenge presented by Comp Cams is on the eighth-mile Beacon Dragway at Paducah, Ky. on June 6-7.