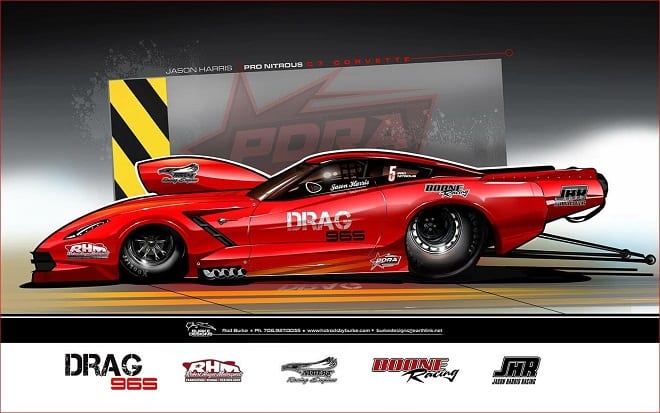 The inaugural PDRA Pro Nitrous Champion, Jason Harris, will pursue his next Championship behind the wheel of a 2016 Corvette. The fiery red Firebird that took Harris to the 2014 Championship has become synonymous with the driver, but now the 35 year old North Carolinian is ready for an updated look and another winning year, teaming up once again with Boone Racing and Robert Hayes Motorsports.

The Corvette will sport the same ‘racing red’ that has covered Harris’ machines for years, and, also like the Firebird, is being built by Robert Hayes Motorsports. “It’s time for a fresh look,” told Harris. “The Firebird is a great car and I’m going to hang on to it, but it’s got well over 1000 runs on it, so it’s time to update. I really prided myself on the Firebird because it was something different. We wanted to continue to have something that would stand out from the crowd a bit so I’m super excited about the ‘vette.”

“We’re excited about getting a new car done,” echoed Hayes, who not only builds the team cars, but also serves as Crew Chief. “The other car had a lot of runs on it so it’s time to update and get the best of the best. It’s a good opportunity for us to get back with Jimmy and Brad Boone, for everybody to come together and focus on one car. We’re looking to get back on top where we belong.”

Hayes has major updates planned for the Corvette, which will also feature his own chassis design and a Tim McAmis body with paint by Wytheville, Virginia’s Terry Davis. The collaboration between Harris, Hayes and Boone Racing, consisting of Brad and Jimmy Boone, promises to continue making waves in Pro Nitrous.

“All of us agreed on [the Corvette],” stated Jimmy Boone, the elder half of the father/son duo that makes up Boone Racing. “The Corvette is new. The body style is sexy. It looks fast. Robert is a great car builder. When Robert was our tuner we were winning races left and right. So I’m excited to be back with him. It makes racing more fun when you feel like you have a chance to win. I feel like our team has some of the best people out there.

“You don’t make any money racing, so you’ve got to enjoy what you’re doing,” he added. “They’re just good people, good attitudes. It’s just a lot of fun, but we’re out there to win. We want to put a good car out there and a good team. I feel like we’ve got the best we can get with Robert Hayes, Jason Harris and us.”

Harris says the Boone-owned Corvette should be done and ready for testing by the first of February, about six weeks before the PDRA season opener at Tulsa Raceway Park. After a somewhat disappointing 2015 season, Harris would love nothing more than to lead the Pro Nitrous pack again.

“Teaming up with the Boones was just a natural progression for us,” said Harris, who will also continue to be backed by Mohammad Al Sabah’s Drag 965 and Hoosier Racing Tire. “Jimmy and Brad are good friends of ours. They come over to the shop on Saturday and Sunday and hang out with us and work on the car. They still want to be involved in racing. I still want to race at this level. In order to do that, we teamed up. I’ve always raced on a budget, and now that we’ve teamed up with Boone Racing to share the financial responsibility I feel like we’re going to be really, really competitive, because now we’ve got the finances, know-how and experience to be a dominant force. I’m proud to team up with them and to have a friend and crew chief like Robert. We stick together making decisions and I think that’s what’s made us a pretty tough team.”

“We can combine forces and be healthy.” Boone agreed. “We’re going to put Jason in equipment that will be [championship chasing status]. We want to qualify in the top half and be a threat to win any race. With the new car and a really good engine program and Robert Hayes tuning we feel like we could beat anybody.”