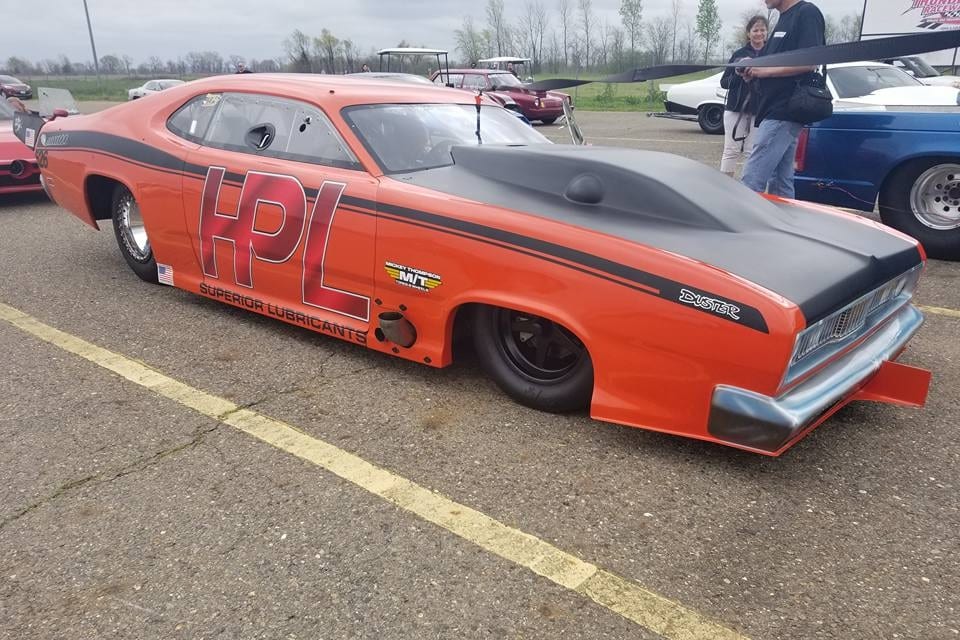 When Bo Butner pulled into Thunder Road Raceway in Gilliam, La., for last weekend’s National No Prep Racing Association’s Small Tire Legends event, there was a stern message waiting for him.

Considering the defending NHRA Pro Stock world champion had his semi, bus and Nitro Fish trailer in tow, it was a little peculiar, but also a sign Butner, racing his first no-prep event, was entering into a bit of a different world.

“As I pulled in the gate, a guy at the track said, ‘You know, I really appreciate you coming, but don’t get your feelings hurt because people don’t know who you are and you’re probably not going to do well’” Butner said.

It didn’t long for egg to turn up on that man’s face.

Butner was recognized almost instantly and in great numbers, and man deemed “The People’s Champion” by a steadily-growing fanbase had an impressive first-time showing driving Harry Hruska’s ultra-cool turbo Duster.

He pulled off a round win in a race that paid $100,005 to winner Keith Szabo, and also won a pair of grudge races that night, most notably a thrilling duel against top name Kye Kelley.

During an off weekend in NHRA Pro Stock, the venture proved quite the thrill ride for Butner, who enjoyed every aspect of the weekend on and off the track.

“As soon as we pulled in a lot of fans recognized us, which was pretty cool,” Butner said. “They’re hardcore racers and it was pretty impressive. It’s a good group of people. After being in the middle of it, they are fans of (NHRA racing) and there’s more than a few of us that keep an eye on them. It’s a neat world. I’m all about racing, I don’t care what it is.”

The whirlwind of a weekend all transpired in a matter of four days for Butner. He got his Pro Mod license in Hruska’s turbocharged Camaro in Phoenix at the NHRA’s preseason testing, quickly developing a friendship with Hruska. He mentioned the big Small Tire Legends race was close to where Butner currently was for business, so on a whim, Butner and his team picked up the Duster and went straight to the track.

Once they got to Thunder Road Raceway – after the harsh greeting, of course – there was work to be done. Led by Darrel Herron, Butner’s crew chief in Pro Stock, the team took off the big tires, put 10.5” tires on the Duster, welded parts, removed the wheelie bar and put it all back together, all in time to make to make a pair of test hits on Thursday and Friday.

“I had no idea what to think,” Butner said. “It was a whirlwind, but we went out and did well. That felt pretty good.”

Of course, the highlight was the pair of grudge matchups in the no-prep race, including the must-see duel with Kelley. It was close initially – with Butner quickly adjusting to having a person flashing a flashlight to leave off the starting line – but the Duster took over in the back half, outdistancing Kelley for the win in front of a huge, overflow crowd at Thunder Road Raceway.

Butner’s phone got in a workout the rest of the night, which told the former NHRA Lucas Oil Comp world champion all he needed to know about the significance of the win.

“He’s supposed to be the man and it was funny how everybody packed in on the starting line for that one,” Butner said. “There was so much betting going on, it was pretty crazy. We outran him by a car length and we knew we were a player then. That was a big win. I had a lot of people texting me they had bets on that one, so that was a pretty cool deal.”

The experience was certainly a memorable one for Butner, from the huge crowd and what he called an old-school setting. Of course, the backend power of the Duster had a distinct impression on Butner as well.

“When you drive something with that much boost, there’s no feeling like it,” Butner said. “I like the unpredictability of it.”

The no-prep experience continues an impressive run for Butner, one that started with his Pro Stock championship run a year ago, winning the NHRA opener in Pomona to start 2018 in what he hopes is a strong title defense year.

Along the way, he plans to do more no-prep races and possibly step into a NHRA Pro Mod car as well in 2019. It’s a lot to juggle, but Butner, the current Pro Stock points leader, continues to have a blast, even as he is still getting accustomed to his celebrity status.

“It’s still so different. I really feel like a normal guy that just wants to race,” Butner said. “I was getting on a plane (last week) and I walked past a lady and she said, ‘Hey, you’re Bo Butner.’ It took a second for it to register, but it’s still great and I’m just blessed. If it can make the sport grow, that’s my goal. It was very cool to win Pomona and the season started has great in Pro Stock. This new stuff is a bonus, but all of this is fun.”