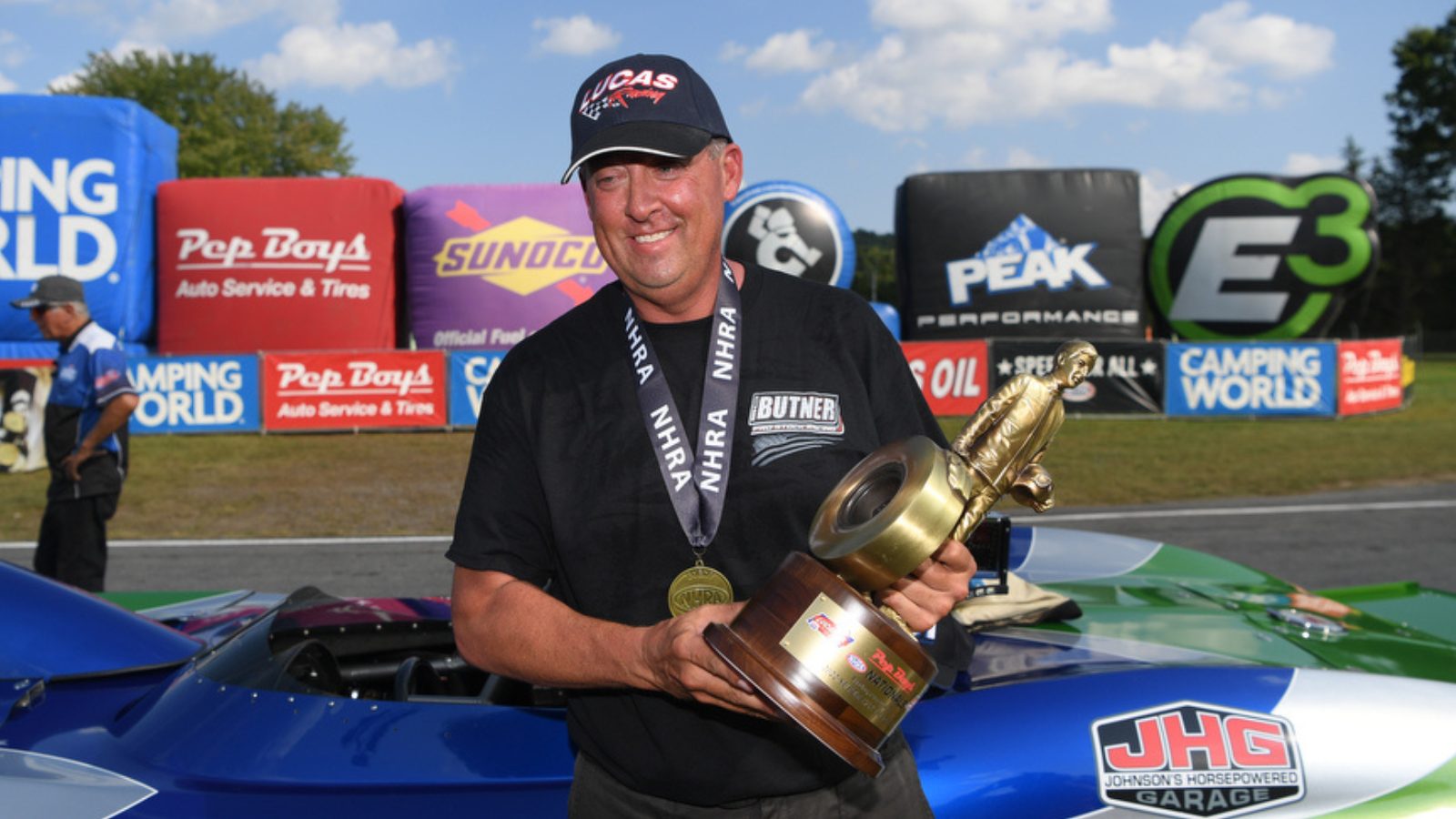 There’s just something about Maple Grove Raceway for Bo Butner. This weekend, he came to the starting line for two rounds of Pro Stock eliminations as the No. 1 qualifier in his awakening Johnson’s Horsepowered Garage Chevrolet Camaro. In Super Gas, Butner lasted through six rounds to claim his second consecutive win in a category that requires an intense combination of a well-prepared racecar, a driver with skill at both ends of the racetrack, and a little bit of luck.

The win was Butner’s fourth at Maple Grove Raceway, and all of his wins there have so far come in different categories. He adds the 2022 Super Gas win in Reading to a portfolio that also includes a 2010 win in Stock, a 2011 win in Comp, and a 2017 win in Pro Stock.

“No. 4 for us in four classes here? That’s pretty cool,” said Butner, now a 29-time national event winner across six different NHRA categories. “You know, I never think of Reading being one of my tracks, but this isn’t bad. It’s quickly becoming a favorite.”

Leaning into skill and hoping for luck, Butner survived an intense third-round competition with defending event champion Jason Kenny in Super Gas. Kenny was excellent at both ends of the dragstrip with a .012-second reaction time and a 9.901 on the 9.90 index, but Butner was a tick better across the board to win by a mere two-thousandths on an .011 light and dead-on 9.90.

Butner’s fiancée, Randi Lyn Shipp, was on a similar course as she came into Sunday with a scheduled trip to the semifinals as well. Reigning Division 3 champion Shipp was racing in Stock Eliminator, a category in which she has seven-times before been a winner at the national event level. Also of note, she was runner-up at Maple Grove in 2019.

The Sunday story
Raceday dawned sunny, warm, and promising for the Bo Butner Racing team. Their first round of competition on Sunday at Maple Grove was Pro Stock, and Butner, who had secured the 12th No. 1 qualifier position of his career, knew his #JHGDriven Chevy could go toe-to-toe with anyone.

In the first round, Butner defeated Fernando Cuadra Sr., utilizing a .037 reaction time and clocking the second-quickest pass of the round, 6.565, 208.84 mph over a (.029) 6.643, 205.51. Round two came quickly as NHRA hustled to meet the constraints of a live television broadcast on the FOX network, and Butner was soon back on the starting line for a battle with Troy Coughlin Jr., a surging driver who now has two wins in four final rounds on the season.

“That happened, and then I’m -.005 red in my Super Gas bye run because I was just amped up,” said Butner, shaking his head. But a foul-start on a solo pass still counts as a win, and Butner advanced to the 59th final round of his career.

“I rolled some in there for the final, and it was a good race,” said Butner. “He’s a very nice kid, and I wish him well – he’ll probably win a lot of races, but this one went our way. It was a good day. Randi Lyn had a shot, I had two shots, and I’m very happy and excited with how things are going.

“The JHG Chevy is a great car, and I’m so desperate to win or at least get to the semifinals and the final for Jason Johnson [sponsor] and all the guys who work so hard on our team. I’m looking forward to the rest of this year.”

“I went up there knowing what I needed to do, and I feel like, for the most part, I did my job,” said Shipp. “I hit the tree excellent; I told myself I was going to be .009, and I went up there and I was .008. I couldn’t have done that any better. That was darn close.

“In years past, my car has been way better than I was on any given day. It usually does what it’s supposed to, and I’m usually the missing link. But I’ve made a lot of effort to be better at being on my game and not letting anything get in my head. I told myself I was going to go for it, and this weekend I did. We’ll see what happens, but this is exciting. Overall, we had a good weekend. I’m excited to go to more.”

Making plans
The Bo Butner Racing Sportsman cars are headed back to the race shop get everything together for the big trip West. Butner will only be representing Johnson’s Horsepowered Garage in Pro Stock in Charlotte next weekend, but after that, the team will have Sportsman entries at the remainder of the national events and the divisionals along the way.

“Bo will tell you he isn’t chasing points in Super Gas, but me and Dylan [Mudd, crew member] are – he’s just our hired gun,” joked Shipp. With two wins in three final rounds, Butner could very well finish in the top 10 in the Super Gas standings.

“It’s exciting to see how well you can do,” said Shipp. “We love the Pro Stock deal, it’s a big team effort over there, but this is just me, Bo, and Dylan. Sportsman racing is different because it isn’t about who has more money or who worked harder over the week. For the most part, all these cars are very similar, and it’s what you do out here and how you work together and how your driver performs that wins the races. This is smaller scale, but that’s what makes it fun.”

Race 2 of 6 in the 2022 NHRA Camping World Drag Racing Series Countdown to the Championship, the Betway NHRA Carolina Nationals, will take place at zMAX Dragway in Concord, N.C., September 23-25.