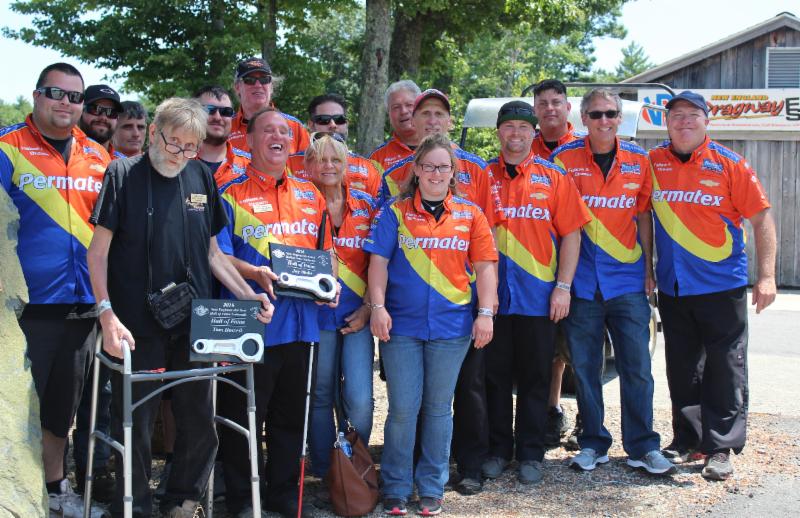 “I am incredibly humbled,” Blake said. “It’s an amazing honor. I started going to New England Dragway as a very young kid, and to be honored and part of history is a pretty amazing thing.”

Blake was one of six inductees named to the Hall, including longtime Follow A Dream tuner Tom Howell, as well as Dick Clark, John Corcoran, Jim Mahan and Rick Stetson.

“It’s very humbling when you look at some of the people and what they’ve accomplished that are part of the Hall of Fame now,” Blake said. “Also, being inducted with Tom Howell, it’s really awesome.”

Howell joined Blake in 2003 and was instrumental in the Follow A Dream/Permatex team becoming very successful in the Top Alcohol Funny Car ranks in NHRA national events as well as regional and divisional events.

“When Tommy and I teamed up in 2003, you always have goals and dreams of doing things that really make an impact,” Blake said of Howell. “Tommy tuned many things prior to working with me and it’s really awesome to be inducted into the Hall of Fame with him.”

Blake paused and then added about his and Howell’s induction, “It was more me being there with him. If it wasn’t for Tommy and what he did for our team, there’s no way our Follow A Dream team would have ever achieved the success it has.”

Under Howell’s tuning proficiency, the Follow A Dream team has won a regional championship, four national events and 10 divisional/regional events – including a single-season high of three wins in 2015 with former driver Todd Veney.

Howell stepped down from his role with the Follow A Dream/Permatex team prior to this season after being diagnosed with Amyotrophic Lateral Sclerosis (ALS – known as Lou Gehrig’s Disease).

“We really miss Tommy, but we hired Anthony Terenzio to fill Tommy’s role with the team and he’s done a fine job,” Blake said.

In addition to Terenzio joining the team this year, Phil Burkart took over as driver of the Follow A Dream/Permatex TAFC Chevrolet Camaro when Veney retired at the beginning of this season.

After three weeks off, the Follow A Dream/Permatex TAFC is back in action this weekend and looks to repeat last year’s divisional race win at Lebanon Valley Dragway in West Lebanon, New York.

“We’re the returning champ and we are hoping to continue our success there,” Blake said. “It’s a local track for Phil (Burkart), so we’re looking to win it.”