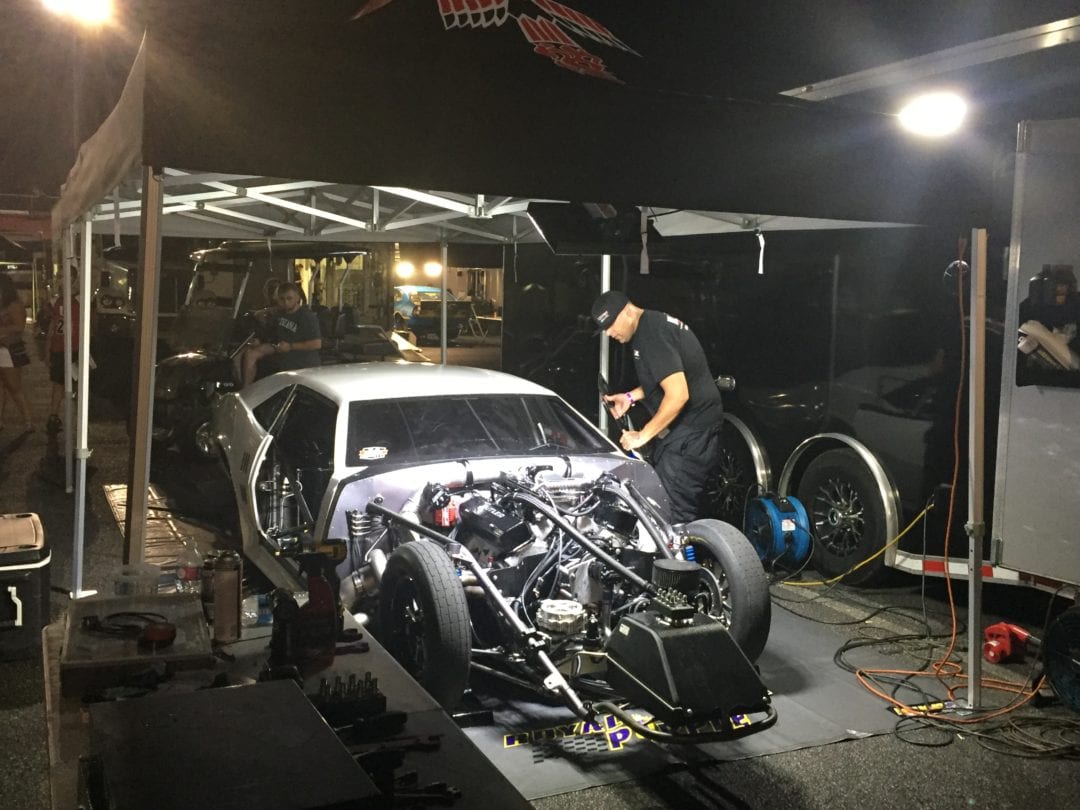 It was after midnight at Gateway Motorsports Park and a crowd was forming around the small trailer and pop-up forming the pit of Justin “Big Chief” Shearer. The star of the Discovery Channels’ hit reality television show Street Outlaws had just made his last pass of the night, a 4.359-second lap at 170.08 mph, and his fans were waiting patiently for him to return.

There were no fancy tow vehicles for the Oklahoma-native, as he didn’t even know he was going to race here this weekend, so he had to drive the already near-mythical CrowMod Pontiac Firebird to his pit area. What would be the first-ever pass in the car in full NHRA Pro Mod trim was a spur-of-the-moment decision.

“Actually, we weren’t even gonna test the car,” he said once he went over the car with his crew after the Q4 pass in the Pro Boost vs. Pro Nitrous class of the Anarchy at the Arch III Street Car Super Nationals event. “We were going to take it home and finish it, but (Thursday) night, it was going good and we just stayed up late and finished it.

“Everybody went home today and me and Justin McDaniel are still here and we were like ‘Well, instead of driving it home, we’ll just go out and make a lick somewhere’ and I heard they were having a race here, so we’ll stop by here and make a hit.”

"Big Chief" shut it down a little early as his infamous CrowMod drifted toward the centerline, but he's clearly making progress in his second NHRA-legal pull. #makedragracinggreatagain

The surprisingly-humble Shearer seemed a little stunned the car was still in one piece after three passes at Gateway Friday. “I thought we’d make a hit and break it and then I’d have to go home and fix it,” he said. “But we’re still here, we’re in the race, we qualified, so we’ll go into first round tomorrow and see if we can get lucky, you know?”

The very first pass of the day ended very quickly. In fact, it ended about 15 feet past the starting line due to the setup, one the new NHRA racer hadn’t experienced before.

“On the very first pass, I had to put the really big Pro Mod turbos for the class,” he said. “That’s the only ones they allow. I don’t usually run a turbo that big. I didn’t think that my little-bitty motor would be able to spool them that fast, so I had the boost ramped just straight up, thinking ‘ah, it’s going to take forever for it to make boost.’

“I let off the brake and it made 25 pounds in .4-seconds and 35 pounds of .8-seconds, and that was just way too much for the car and the chassis and everything we had set up. It shook the tires real hard at like ten or fifteen foot out.”

Over the course of the night, Shearer’s small crew changed everything on the car but the paint scheme to compensate for the added weight of the NHRA trim he will race at the U.S. Nationals next weekend in Indy. With the car still intact at the end of the night, it was a good session of qualifying.

“We’re kind of excited, really,” he said. “It’s still together, I haven’t crashed it yet, and all the borrowed parts that are on it, at this point, are still in good shape. We’re excited. If we can go in (Saturday) and make a full hit and not shake the tires…I mean, we’re not going to crush anyone’s dreams out here at this race. But the next one or the next one, you never know. We’ll swing at everybody.”

While the 4.35 went on the timesheets as his best run of the day, his second pass was actually looking to be impressive, but a flirtation with the center line forced him to shut down the CrowMod early.

“I don’t have a crew, so I lined myself up crooked and drove to the center line. I had to shut it off on that one, but it was actually going pretty good on that pass,” he said of the 4.44-second run in Q2. “That would have been a pretty good lick for us on the slicks and NHRA trim. But I don’t get to run the magic fuel, I don’t get to run the smaller turbos, and I can only run about 37 pounds of boost, and I’m not used to that.”

With a smile on his face as his fans continued to mill around him and the car, Shearer repeated his hopes for Indy.

“For what we’ve got going, we’re pretty excited now,” he said. “If we can run it out the back door at Indy and quarter mile this thing, we’ll see what happens. Who knows, man. Hopefully, someone out there will see it and go ‘Man, if that kid had some damn money, he’d be fast!’ and want to go racing with us.”