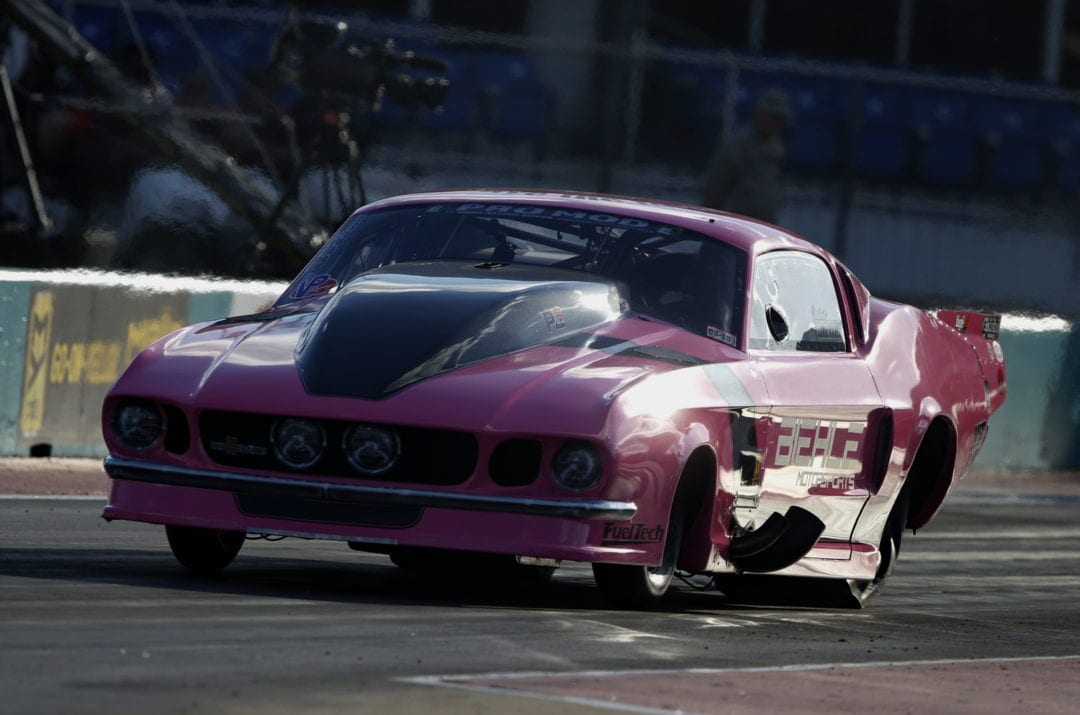 However, after a few adjustments by crew chief Jamie Miller, Biehle improved to 5.78 at 256.89 mph on a slightly cooler 114-degree surface in round two.

“The air and heat here obviously slows us down a bit, but we’ve had way worse air than this, and despite the heat the track is in great shape. So we’re not getting stressed out about it,” Biehle said. “It’s something that you’ve just gotta’ deal with and make changes and get around it the best you can. Jamie’s on top of it.”

While Biehle said he was “very happy” with his car’s performance of so far, he also believes “it can still go faster” as the weekend progresses.

“I knew as soon as I let go of the button and it made it through that first 60 foot, you know, where these Pro Mods always seem to have trouble, I knew as soon as it got past there that it was on a run. When I went through the traps I turned my attention straight to the radio to hear what it run because I knew it was haulin’ ass!”

“My mother had breast cancer; she beat it and she’s been clear for about 15 years now. In fact, her yearly check up is coming up next week so we’re all obviously hoping for the best on that.

“So this is something that’s near and dear to my heart that we started doing about three years ago just to bring attention to the cause. We started out just doing pink chutes and then we kind of moved to the next level by wrapping the car last year and this year we did that and carried the wrap over to part of the trailer, too,” he explained.

“The good thing about it now is we only had one NHRA race in October the last couple of years and that was Vegas, but now we have three: here in Dallas, then Charlotte, and then the final one in Las Vegas, so that’s putting it in front of a lot more people.”

Following Biehle at the close of the day was Canadian Justin Bond with a 5.79 at 255.82 mph in his ’68 Firebird. Bond, however, suffered some damage on the top end of his run and was issued his first oildown penalty of the year.  And though Frigo also improved to 5.79, just two-thousandths of a second back of Bond, he and his ’69 Camaro were dropped to third on the qualifying list.