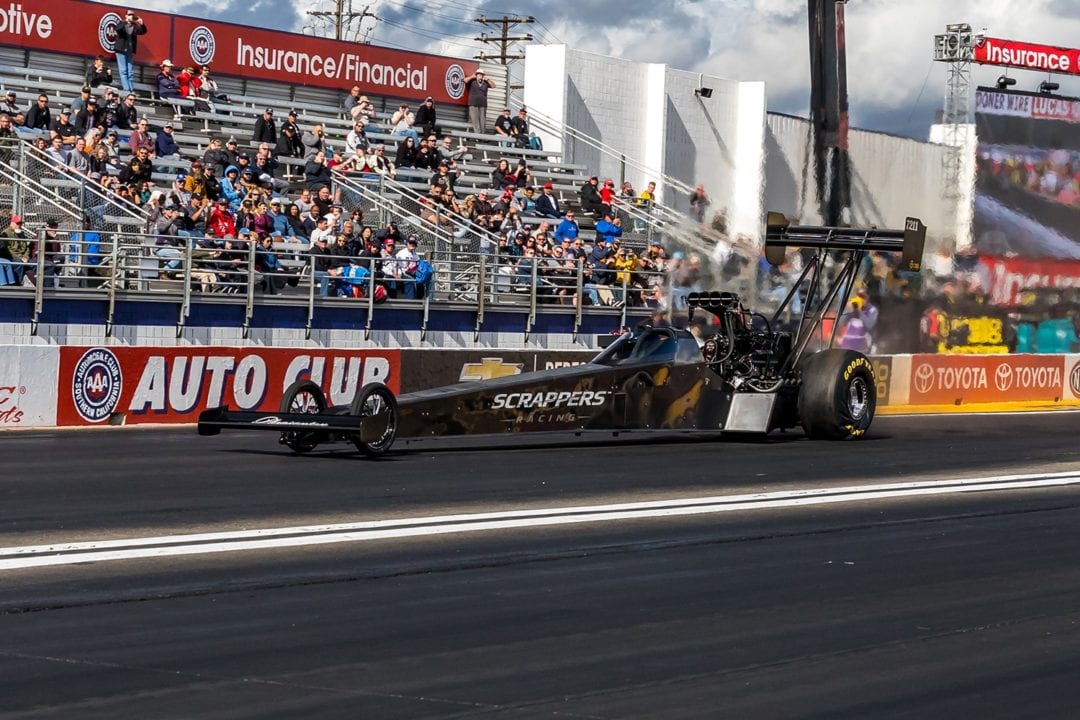 Salinas piloted his Scrappers Racing dragster to a semifinal finish on Monday, posted career-best runs and ran the fastest time of the race, setting an impressive tone for the 2019 campaign with a new team led by crew chief Brian Husen, tuning advisor Alan Johnson and Arron Cave.

“When you surround yourself with the right people and the right combination, it’s amazing what you can do,” said Salinas, who earned his second career semifinal finish. “It’s our first time with a new crew and we set our career-best E.T., set and reset our top speed three times and went to the semifinals. We have a car, we have a team and everyone better look out because we are coming.”

Salinas entered 2019 with big expectations and then sent a strong message to the rest of the Top Fuel class that he will be a top contender all year. But the chance to display that on raceday was delayed until Monday, as rain postponed eliminations.

Salinas and Millican were the only pair not to run in the first round on Sunday, putting the California native in the first-time position of racing on Monday. But any worries about performing right off the bat were quickly put to rest by Husen and Johnson.

“They were all excited about it because we were the first ones on a fresh track and they knew we would have a fast car in the 60s,” Salinas said. “I wasn’t even in the .60s yet, but we were knocking out 60s (on Monday) like it was nothing. Everything was smooth, clean and fast.”

That was apparent right off the bat, as Salinas went 3.682 at 333.74 mph to knock off Millican in the opening round.

He followed with a 3.685 at 334.40 – good enough for top speed of the weekend – in his second-round matchup with rookie Austin Prock, setting up a monumental race with defending world champion and No. 1 qualifier Steve Torrence.

Salinas put together another strong run, going 3.687 at 318.47, but Torrence was slightly quicker off the line, using his 3.688 at 329.50 to nip Salinas by eight feet in a thrilling side-by-side semifinal race. It left Salinas excited about the potential of the team, but also motivated to improve his own performance.

Partners Global Electronic Technology and Pleasanton Ready Mix will join them in taking on that challenge, and both were with Salinas this past weekend. Salinas inked the deal with Pleasanton just days before the Winternationals and his strong performance this weekend could pay dividends off the track as well.

“They’re good people and they had a great time,” Salinas said. “Now we feel comfortable to go look for partnerships and sponsors because we have something to sell.”

Salinas and the Scrappers Racing Top Fuel team return to action on Feb. 22-24 at the NHRA Arizona Nationals in Phoenix.