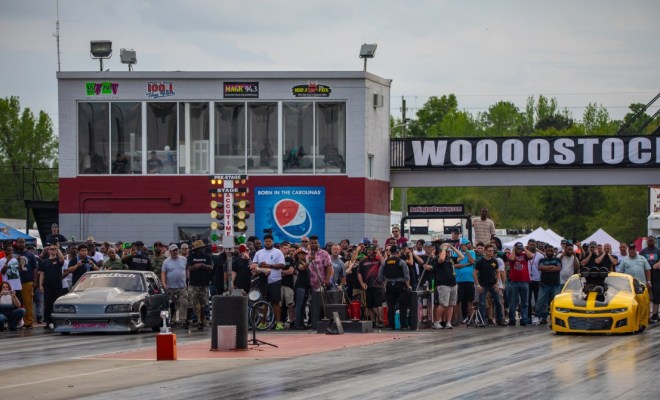 Keith Berry promised Woostock and that means there’s going to be Woostock.

The hyped event will take place as planned May 14-16 at Darlington Dragway with restrictions in place to follow local government mandates in place during the COVID-19 pandemic.

That means there likely won’t be fans in attendance, along with plenty of social distancing in place for the 300-plus cars expected for the race. But Berry is having the race and that’s a stone cold lock.

The race will be broadcast live on SpeedVideo.com and feature all the classes originally slated for the event, including Pro Mod, Radial vs. the World, Carolina Xtreme Pro Mod, grudge racing and Lance Stanford’s and Travis Harvey’s Carolina N/T Small Tire Racing.

As for fans, Berry said there would only be a change to let in a limited amount if the government relaxes current restrictions. Even then, Berry expects it would be a small number and he’s not totally sure he wants to go down that path even it’s permitted.

“If the government says last minute we can have spectators, then we’ll do it if we feel it’s right,” Berry said, encouraging fans to watch online.

It’s been a long and anxiety-filled several weeks for Berry and everyone associated with the race. He’s been in constant contact with Darlington Dragway owner Russell Miller since the original date in April was pushed back a month.

Berry was determined to try and have a race, but even he admitted it always hasn’t been easy to maintain a positive spirit throughout the coronavirus public health crisis.

“It’s been stressful, for sure,” Berry said. “I don’t know how many phone calls Russell and I have had. It’s been an rollercoaster. I have flip-flopped a dozen times a day, everyday. In the mornings, I’m like, ‘There’s no way Woostock isn’t going to happen,’ but then in the afternoon, I’m like, ‘We cancelling the race.’ And that’s been each day. It’s been a rough deal.”

What’s helped his psyche is seeing what Darlington Dragway has already put in place in recent weeks.

After coming up with a detailed social-distancing plan, they were granted permission by local government to hold a test session two weeks ago. The highly controlled plan worked perfectly, so much so that more than 100 bracket cars ran last weekend in an event at the track that couldn’t have gone better.

They are planning to host 300-plus bracket cars the week before Woostock, properly spacing everyone out and taking every safety precaution possible in the process. There won’t be fans allowed, but it’s given Berry a strong baseline to rely on heading into his race.

“They’ve got a great plan in place to do it right,” Berry said. “The local government praised them for it. They’ve got it down pat.”

Woostock will start with test sessions on May 12-13, leading directly into the race the next day. To say the anticipation is high would be a massive understatement. Berry has received calls and texts from racers across the country as an air of excitement has been evident. The general belief within the industry is it’s time to get back to drag racing, and it’s a tone Berry has certainly noticed.

“My phone blows up daily between racers and fans,” Berry said. “I got a message last night at 2 a.m. from a racer and it literally said, ‘Let’s go racing.’ Everybody is ready. I think this is the race solidifies us as a race you have to go in the future. There was a lot of excitement building up previously. Now it’s going to be huge.”

Berry expects a strong number will watch the event live online, especially since it will be the first race back for RvW and Pro Mod entries. That means a star-studded lineup will be on hand in Darlington, as well as the big purses originally promised in each class.

Berry isn’t shifting off of that, either, even if he knows what it will mean for him.

“One hundred percent, we’re going to lose money,” Berry said. “I know for a fact that I’m going to pay several, several thousand dollars out of my pocket for this race to happen. That being said, we promised Woostock, we’re going to have Woostock.

“I can promise you all of the money from the tech cards or racer entry, and all the sponsorship money, 100 percent is going to the racers.”

In more ways than one, all eyes will be on Darlington that weekend. NASCAR resumes racing the next day at Darlington Raceway – just five miles down the road from Darlington Dragway – putting a massive racing spotlight on the area that weekend.

Like Woostock, it will be a no-fan race, but Berry is a man of his word. He promised Woostock and everyone is about to get a race worth remembering.