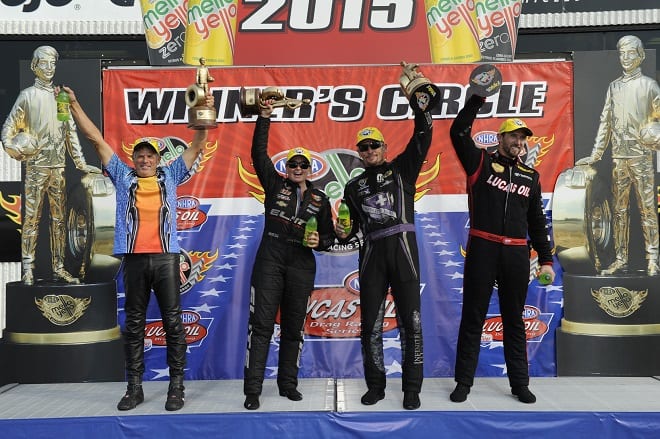 Jack Beckman completed a sweep of the weekend in Funny Car with his victory on Labor Day Monday at the Chevrolet Performance U.S. Nationals.

Beckman defeated three-time Indianapolis winner Robert Hight in the final with a reaction time advantage victory. Beckman ran his Infinite Hero Foundation Dodge Charger R/T to a 4.058-second pass at 310.77 mph while Hight ran a quicker 4.045 at 309.77 in his Auto Club Chevy Camaro SS. Despite running the slower time, Beckman had a superior 0.034 reaction time advantage to Hight’s 0.063 which helped him take the victory. It was his sixth win of the season, 21st of his career and first at Lucas Oil Raceway at Indianapolis. 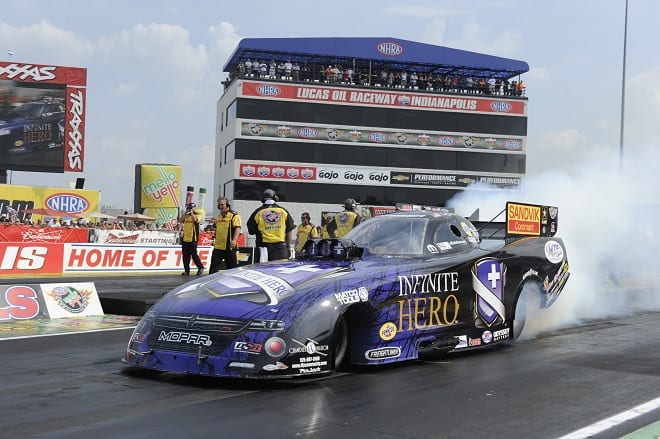 In addition to earning a coveted first victory at the tradition-rich event, Beckman also won the $100,000 Traxxas Nitro Shootout all-star race on Sunday and was the event’s No. 1 qualifier. Beckman outran Bob Bode, Ron Capps and Del Worsham to advance to the final.

“It’s hard to enjoy what just happened because you are worn out,” said Beckman, who enters the Mello Yello Countdown to the Championship, NHRA’s six-race playoffs, as the No. 1 seed. “Yesterday after the Traxxas Shootout I was thrashed. It was a hot day that ended up wonderful. Getting through today was the key. I think surviving this is an effort unto itself. I’ve got to let that trophy sit on the office shelf and stare at it for a while to realize that we actually did it.”

Hight, a three-time Indy winner who was making his sixth U.S. Nationals final round appearance, was the runner-up in the Traxxas Nitro Shootout. Hight, who made his third final of the season and second-in-a-row, will take some momentum into the playoffs as the No. 7 seed.

Alexis DeJoria clinched the 10th and final Funny Car spot in the Countdown when Courtney Force fell to Tommy Johnson Jr. in the second round. Force defeated DeJoria in round one, but had to reach the final to overtake the defending Indianapolis winner for the final Countdown position. 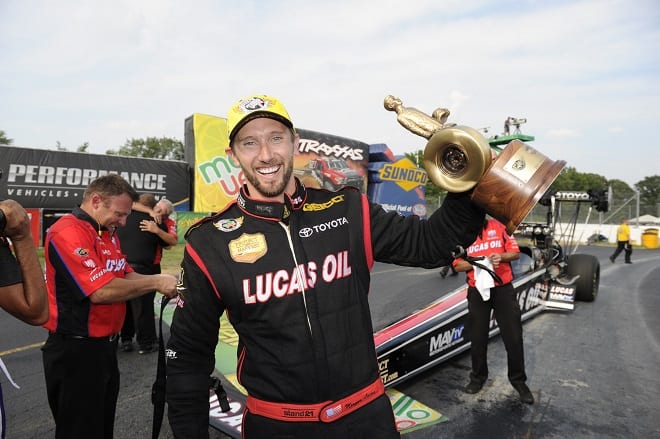 Lucas picked up his first U.S. Nationals victory with a final round performance of 3.864 at 319.90 in his Lucas Oil dragster to defeat Dave Connolly. The win was Lucas’ first of the season and 12th of his career. He defeated Leah Pritchett, teammate Richie Crampton and Brittany Force to reach the final. It is the second straight U.S. Nationals victory for Morgan Lucas Racing after Crampton’s win last season.

“Winning this race is absolutely massive,” said Lucas, who stepped out of a full-time ride after the 2013 season to focus on the family business, Lucas Oil. “It’s the biggest race win I’ve ever had. I want to live in this moment for a long time because you never know when it will happen again.”

Connolly was racing in his second Top Fuel final after moving to the category this season after a successful career in Pro Stock. Despite the loss, the driver of the C&J Energy Services dragster was able to claim the final Countdown spot with his runner-up finish.

Defending and eight-time world champ Tony Schumacher will be the No. 1 seed in the playoffs. 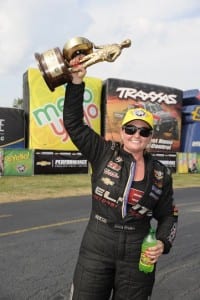 In Pro Stock, Enders claimed her first career Indianapolis victory and sixth win of the season in her Elite Motorsports Chevy Camaro, defeating teammate Drew Skillman in the final on a holeshot with a 6.611 at 209.75 to Skillman’s quicker, but losing 6.606 at 209.98. Enders now has 18 career victories, which ties her for second on the all-time wins list by women in Mello Yello Series competition with the legendary Shirley Muldowney.

Enders used holeshot starts to win three of her four rounds during the day and she sped past V Gaines, Larry Morgan and Greg Anderson in the first three rounds.

“This is something I’ve dreamt about and worked for my entire life,” said Enders, who will enter the Countdown as the No. 1 seed for the first time. “I made my first pass at this track in a junior dragster when I was nine in 1994. I’ve had lots of really great memories here. It makes it worth it to be able to do it with the right people.”

Rookie driver Skillman was seeking his first win in Pro Stock after two previous runner-up finishes. Despite the loss, Skillman and his Ray Skillman Racing Chevy Camaro will be ready for the Countdown, where they are the No. 8 seed.

In Pro Stock Motorcycle, Savoie took home his second victory of the season with a 7.011 at 193.02 on his Savoie’s Alligator Farm Suzuki, beating No. 1 qualifier Chip Ellis who fouled out at the start on his PiranaZ/Pippin Motorsports Buell. The win was Savoie’s third career victory and his first at Indianapolis. He was the runner-up here in 2011 and 2014. He defeated Chaz Kennedy, Steve Johnson and Hector Arana Jr. to advance to the final.

“It’s a great day,” said Savoie, who will enter the Countdown as the No. 4 seed. “The last round was not the way we wanted to win but we held our composure. We had a good day and we’ve been blessed.” 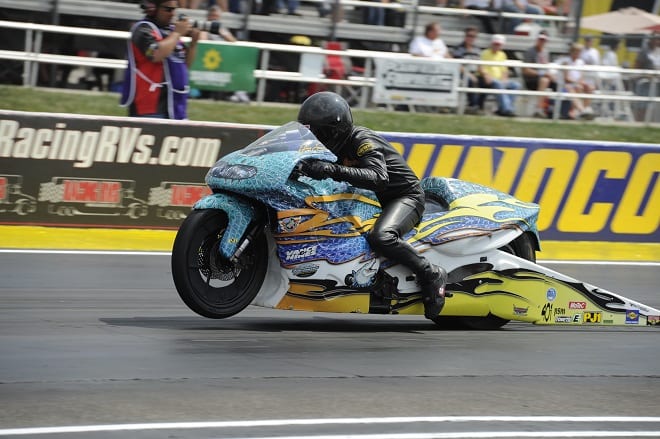 Ellis was the No. 1 qualifier and was looking for his first win of the season. Despite the loss, Ellis was able to move around LE Tonglet and earn a Countdown spot.

This is the second straight year that all four winners were first-time victors of the U.S. Nationals.

The Mello Yello Countdown to the Championship, NHRA’s six-race playoffs, will begin in two weeks with the NHRA Carolina Nationals, Sept. 18-20, at zMAX Dragway in Charlotte, N.C. The championship is open to the top 10 in each professional category following the U.S. Nationals.